A century of WMDs


One hundred years ago this week, a weapon of mass destruction was used for the first time, writes Doug Saunders. Yellow-green gas scattered French troops around the Ypres Salient; a day later the Canadians suffered the same 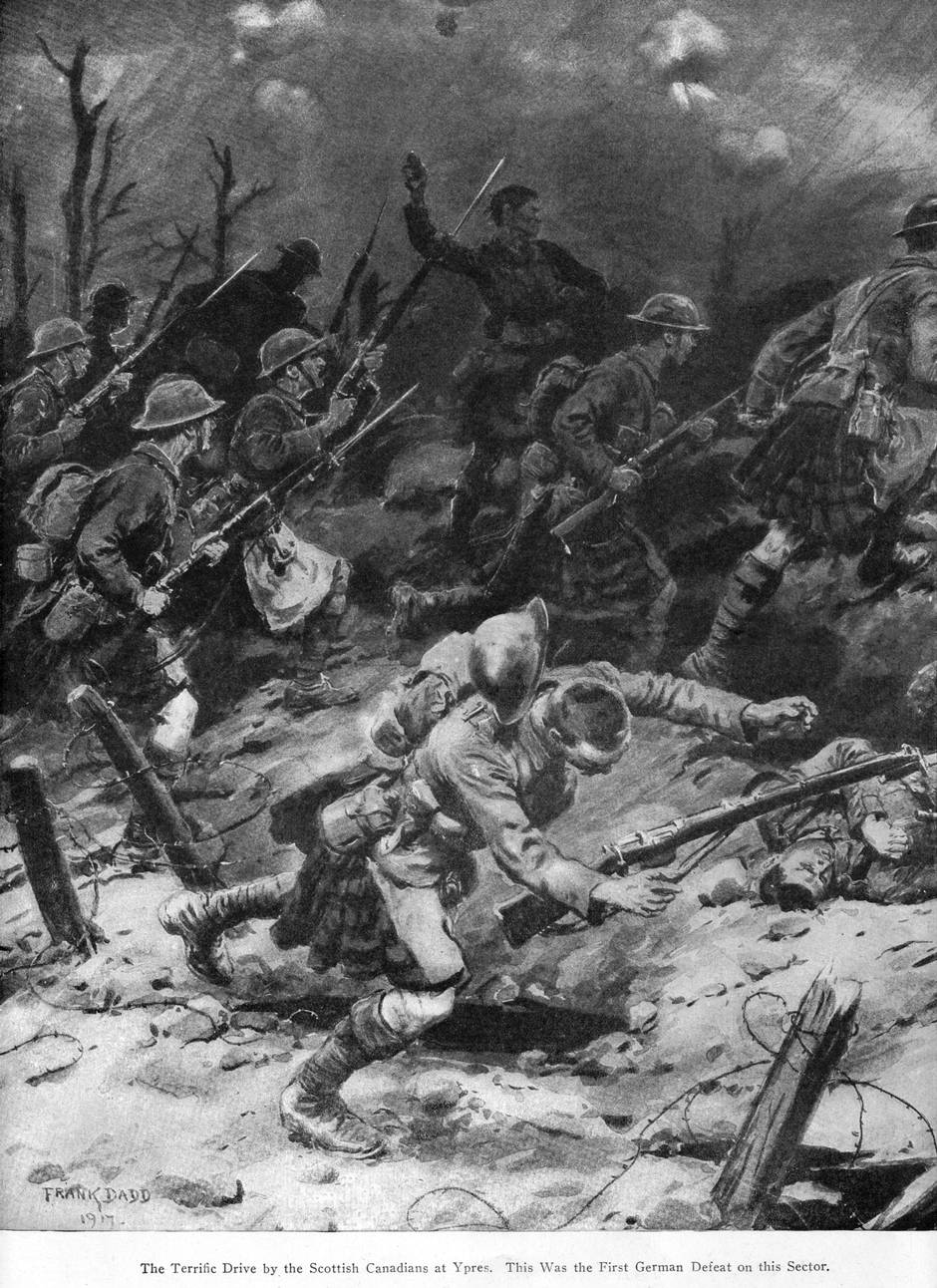 The Canadian Scottish at Kitcheners’ Wood where they mounted a successful counter attack after Germany used poison gas to drive the allies back a day earlier. (Library & Archives Canada)

The afternoon of April 22, 1915, brought the first really warm spring weather to Flanders. It was, as Canadian Lieutenant-Colonel G.G. Nasmith remembered, an afternoon “when the spring feeling suddenly gets into the blood, when one throws work to the winds and takes to the woods in search of the first violets.”

A group of reserve soldiers from the First Canadian Division were taking advantage of the sun to play a game of football behind the lines. Ahead of them, a rise along the Ypres Salient was held by two ragtag French divisions.

Also: Governments have pursued WMDs over the last 100 years, reports Affan Chowdhry, and some have used them to devastating effect

At the top of the hill, three red flares rose into the sky. Along the German trenches at the top, officers passed along the code words “Goot strafe England” (May God punish England). Then, with a hiss, streams of thick, yellow-green gas poured over six kilometres of trenches as the valves on 5,730 canisters were opened, releasing 150 tons of compressed chlorine gas.

Ian Sinclair, a Canadian highlander, remembered that French and Algerian soldiers “started pouring into our trench, coughing and bleeding and dying all over the place, and then we realized what it was.”

At that moment, the nature of warfare changed forever. It was, 100 years ago this week, the first time a weapon of mass destruction had been used on the battlefield: It was the moment, as Siegfried Sassoon wrote, when war became “undisguisedly mechanical and inhuman.”

As the historian Diana Preston notes in A Higher Form of Killing, her chronicle of April, 1915, the first use of gas came within weeks of the sinking of the passenger ship Lusitania by submarines and the first aerial bombardment of a civilian city (London, using airships). “Henceforth no one,” she concludes, “whether a member of the armed forces or a civilian or even a neutral – could feel or be safe from attack without warning from air, land, or sea, however far they were from the battlefield, whatever they were doing, day or night.”

WMDs (as chemical, biological and nuclear weapons are now known) were already illegal in 1915: The Hague Conventions of 1899 and 1907, ratified by all the combatants in the First World War, had outlawed chemical warfare.

In 1915, the effect was devastating. A French officer described his men “running hither and thither like madmen, crying loudly for water, spitting blood, some even rolling on the ground in a desperate struggle to breathe.”

After thousands of French troops fled their trenches in pain or terror, a German infantry advance seized eight to nine kilometres of terrain. The Canadians, stepping into the front line for the first time, tried to retake it, suffering horrendous losses, and then on the morning of the 24th were hit directly by history’s second gas attack: By some reports, they and their British colleagues suffered between 7,000 and 15,000 gas casualties that day, and at least 350 deaths.

Doctor Cluny Macpherson, from St. John's, Newfoundland, quickly came up with the idea of a gas mask made of fabric and metal. (Library & Archives Canada)

Even in a barbaric war, the advent of WMDs was greeted, by victims and perpetrators alike, as a morally shocking act.

“I must admit,” the German senior officer responsible for the attack said at the time, “that the task of poisoning the enemy as if they were rats went against the grain with me as it would with any decent sentient soldier.”

Fritz Haber, the German chemist who had engineered those first gas attacks, defended them as a quicker way to end the war: “it was a way of saving countless lives, if it meant that the war could be brought to an end sooner.” (His wife, a fellow chemist, disagreed strongly, and on May 1 took her own life with his pistol.) That argument would be deployed frequently over the next century by those who advocated the use of WMDs, including the two atomic bombs dropped on Japan.

In April, 1915, German Cavalry commander Rudolf Binding reflected, “Of course, the entire world will rage about it first and then imitate us.”

He was right: By the time the Canadians were recovering from their gas attack, on April 26, British prime minister H.H. Asquith proposed an Allied gas campaign for the first time. The first British use of gas was Sept. 25 that year, in the Battle of Loos.

While Canadians were killed in great numbers by it (in the last hundred days of the war alone, more than 2,500 died by gas), by 1917 Canadians had become famous for their skill at deploying the awful weapon. As the historian Tim Cook has chronicled, heavy Canadian use of poison gas was one of the factors that secured the victory at Vimy Ridge, and Canadian mustard-gas shells scored successful actions in Hill 70, Passchendaele and Canal du Nord, in preparation for which Canadians fired 17,000 gas shells into forests filled with German troops.

The result, when hundreds of thousands of gas-crippled men returned home, was widespread revulsion, and a decade of efforts to ban the use of these weapons. In 1925, 44 countries signed the Geneva Protocol banning the use of gas and biological weapons (the United States, whose Congress blocked it, did not ratify it until 1970).

The manufacture of chemical weapons continued, especially after Hitler’s scientists discovered far more deadly nerve gases in the 1930s. Many expected the Second World War to be a near-total gas war. But the Nazis and the Japanese never used gas against the Allies, believing (wrongly, it turned out) that the Allies also possessed nerve gas and their enemies would fall victim to it. Indeed, the main use of poison gas during the war was not on the battlefield, but in the Nazi effort to exterminate Europe’s Jews in concentration camps.

In the Cold War years, major powers destroyed their stockpiles of chemical weapons; the treaties were largely observed (showing that, even in times of extreme enmity, negotiated anti-proliferation agreements can succeed).

Chemicals became the tool of the rogue state. They were used, most famously, by Iraq’s Saddam Hussein in his war against Iran (where gas killed as many as 100,000 Iranians) and in his mass slaughter of Kurds in 1988. And, most recently, by Syria’s Bashar al-Assad, whose nerve-gassing of hundreds of civilians in the city of Ghouta in 2013 led to international revulsion and, once again, an international agreement to destroy his stockpile.

Those Canadian infantrymen watching the sickening cloud move across their trenches could not have known that it was the beginning of a century-long pattern, in which countries horrified one another into, and then out of, using the most awful weapons.