Hot, humid air, a line of squalls and a gathering storm.

It was when the sky immediately above the Ottawa Bluesfest's main stage darkened, at about 7:20 p.m. Sunday, that executive director Mark Monahan decided to call the show.

"It looked like this thing was literally coming in overtop of us," he recalled in an interview Monday.

But the call came too late. As everyone scrambled off the stage - including the band Cheap Trick, which was performing at the time - a gust of wind topping 96 kilometres an hour hit squarely on the main stage, catching wide vinyl wind walls like sails and crumpling the steel-and-aluminum structure.

"The wind definitely caught the wind walls in the back of the stage," Mr. Monahan said, "and didn't flip it over, but it fell into itself."

One man hurt his neck from a blow to the head. Another two suffered minor chest and knee injuries. One 46-year-old man, a driver for one of the bands, was pierced in the abdomen by a falling piece of stage; paramedic crews lifted him out of debris near the stage before rushing him to the Ottawa Hospital's trauma unit. All have been released from hospital.

In the meantime, provincial investigators have swept in to conduct a thorough after-incident investigation on a structure that did not require government approval beforehand.

Organizers were monitoring the skies for almost an hour after a general Environment Canada weather warning, hoping for a small rainstorm that would quickly clear up.

"We were watching the radar, as we do pretty well all the time," Mr. Monahan said. "Obviously it looked like a system coming in, but it didn't look like it was very long. It looked like it was going to last maybe half an hour."

The wild gusts that brought down Bluesfest's main stage felt like a freak weather occurrence - an uncontrollable act of nature.

But in Canada, extreme weather is a fact of life, says Environment Canada meteorologist Dave Phillips. And severe weather season, between April and October, also happens to be prime season for outdoor events that grow larger every year. Southern Ontario alone can expect to get hundreds of squall lines and microbursts every year, especially as temperatures rise (as they're forecast to do later this month).

"The potential exists for these things to keep occurring," Mr. Phillips said. "They're not foreign. They're not an American kind of thing. They're very much part of the Canadian landscape in the summertime."

Two years ago, a similar burst of intensely powerful wind hit Camrose, Alta.'s Big Valley Jamboree moments before Kevin Costner and his country band Modern West were about to take the stage When that stage toppled, a falling speaker killed spectator and Lloydminster resident Donna Moore.

The incident prompted a review by Alberta's Occupational Health and Safety. Now complete but still unreleased, the results are in the hands of the province's Crown prosecutors, who are deciding whether to lay charges against the concert's organizers or the company that provided the stage. They have until the end of the month to make up their minds, said ministry spokesman Barrie Harrison.

"We have a two-year statute of limitations," he said. "This decision by the Crown prosecutors will need to be made in the next couple of weeks. Until then, the findings of our investigation are not public because that could jeopardize the outcome of any potential court case."

Mr. Harrison said the ministry has since made several inspections of outdoor stages, including those of the Edmonton Folk Festival and the Big Valley Jamboree, and all have passed muster.

Premier Global, the company that supplied the Jamboree's stage, would not comment Monday.

Jamboree organizers "didn't make a lot of changes" the next year, said Larry Werner, spokesman for the Jamboree's promoter, Panhandle Productions. The few changes, he said, included back braces on the stage and extra ballast.

"The stage is a very good stage. … I don't know if that was what was needed - it's what we chose to do."

What's really needed to prevent such events, Mr. Werner argues, is lead time: In the Jamboree's case, organizers had a few minutes after a call from the RCMP before winds hit; the Environment Canada weather warning came about four minutes later.

"The thing that happened happened too fast for humans to react to it," he said. "It was a freak situation."

As the main stage collapsed, the surrounding, smaller stages remained intact. Their owner, Stageline's Yvan Miron, argues that's because they are hydraulic structures and therefore stronger - "like transformers" - not constructed and disassembled, as the main stage would be.

Bluesfest's Mr. Monahan and Mega-Stage's Mr. Berger said their constructed stages are reviewed and approved by independent engineers who check them for structural safety.

The city of Ottawa, which issues permits for Bluesfest and similar events, does not.

"This type of system is not regulated under the Ontario Building Code, as the code is focused on buildings (normally with a floor, roof and walls) that are occupied by people," said city spokeswoman Jocelyne Turner in an e-mail. "In fact, the code does not include any minimum standards for stages but does have standards for temporary structures such as tents."

The incident is now being investigated as a workplace accident by Ontario's Labour Ministry.

Mr. Berger said it's too early to come to a conclusion as to whether Sunday's collapse could have been prevented.

Mr. Harrison, of Alberta's Occupational Health and Safety, isn't so sure: "If a stage is constructed properly, if a hazard assessment is thorough, we shouldn't be seeing incidents like this." 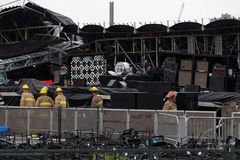