The Nanos Research survey found hydro was the most important issue for 20.5 per cent of voters, eclipsing perennial priorities health care (15.1 per cent), jobs and the economy (9.6 per cent) and high taxes (7.3 per cent). Respondents were asked for their top issues without being given a list of options.

Such a result is "unusual," Nanos Research chair Nik Nanos said. Typically, pocketbook matters such as electricity are "second-tier" concerns behind larger issues, such as the economy.

Read more: Too early to tell impact of cap-and-trade in Ontario: financial watchdog

"Hydro rates right now are the political lightning rod," Mr. Nanos said in an interview. "They are on the radar for everyone."

The poll of 500 Ontarians was conducted from Nov. 15 to 19, using random-digit dialling of both mobile phones and land lines, with live interviews. The numbers are considered accurate plus or minus 4.4 percentage points, 19 times out of 20.

The numbers come as Ms. Wynne belatedly tries to ease the pain of expensive hydro. In September's Throne Speech, she unveiled an 8-per-cent subsidy for residential bills to start on Jan. 1. And at the Liberal annual general meeting this month, she took responsibility for not dealing with the problem and promised more relief: "It was my mistake. And I'm going to do my best to fix it," she told the assembled Liberals.

Now, she must show tangible progress.

"Saying you're sorry is not enough for people who receive their hydro bill," Mr. Nanos said. "For the Liberals, the only way to turn this around is to do some sort of bold move that not only shows they are contrite, but that they can do something to make things better."

The poll suggests the issues Ms. Wynne has spent most of her time on – building transit and fighting climate change – are low on voters' priority lists. Infrastructure investments was the top issue for just 4.8 per cent of respondents, and the environment clocked in at 4 per cent.

"The Wynne government has focused on issues that don't have as close a proximity to the day-to-day lives of Ontarians as hydro rates," Mr. Nanos said. "If you get a bill every month or every two months, you are reminded of how expensive electricity is in Ontario. Other issues like infrastructure are one step removed."

The poll put Mr. Brown's Tories in the lead, at 40 per cent, up nine points from the party's performance in the last election. Ms. Wynne's Liberals sank to 31 per cent, down seven points from the election, while Andrea Horwath's NDP was virtually flat, at 22 per cent, compared with 24 per cent in 2014.

Mr. Brown was the preferred premier of 31 per cent of respondents, compared with 23 per cent for Ms. Wynne and 21 per cent for Ms. Horwath. On the question of which of the three has the qualities to be a good political leader, Ms. Horwath rated 58 per cent – a 10 per cent jump from 2014; Mr. Brown scored 48 per cent; and Ms. Wynne fell to 34 per cent, a staggering 30-per-cent drop.

If there is a silver lining for the Premier, it may be that Nanos' numbers are not quite as bad as those in other recent surveys. Some polls have placed the Liberals in the mid-20s, at risk of being reduced to a third-place rump in the next election.

The Liberals' "vote ceiling" also appears to still be reasonably high: Fifty-six per cent of Ontarians said they would consider supporting the party at the ballot box (down three percentage points from 2014), compared with 59 per cent who said the same for the Tories (up 15 points) and 52 per cent for the NDP (up six points).

Mr. Brown's efforts to steer the PCs closer to the centre of the spectrum – such as by pronouncing himself in favour of a carbon tax, courting the support of trade unions and embracing same-sex marriage – appear to have expanded the Tories' pool of potential voters. But he has not quite taken the commanding poll lead he might have expected given the Liberals' travails.

For her part, Ms. Horwath's folksy image has made her personally popular, but she has not figured out how to translate that likeability into support for her party.

Such numbers suggest there are a lot of voters willing to change their minds, setting the stage for a fierce competition in the June, 2018, election.

"The Premier has taken a brand and reputational hit; Patrick Brown has potential but is still a question mark for about one out of every three Ontarians; and there's a significant amount of goodwill for Andrea Horwath," Mr. Nanos said. "It's going to be a very interesting and dynamic race." 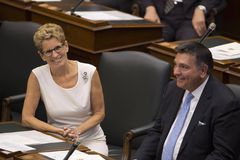