They came to Ottawa from big cities such as Montreal and Toronto, and smaller cities across Quebec and Ontario. In wheelchairs and on prosthetic legs, on crutches and in the embrace of their loved ones, thalidomide victims came to Parliament Hill on Monday for a day they never thought they would live to see.

They said they considered the parliamentary vote on extending them "full support" to be historic. They said they had almost given up. They said that for the first time in decades, they were allowing themselves to feel the raw sensation of hope.

"We've been waiting 52 years," said thalidomide victim Lianne Powell, "for something to happen."

As thalidomide victims walked away from the visitors' gallery of the Commons, many of them wiping away tears after receiving all-party backing for their cause, they said they felt recognition from Canadians for the first time in their lives.

"I thought this day would never come," said Mercédes Benegbi, head of the Thalidomide Victims Association of Canada.

"Finally, we are being listened to with respect. We have hope." 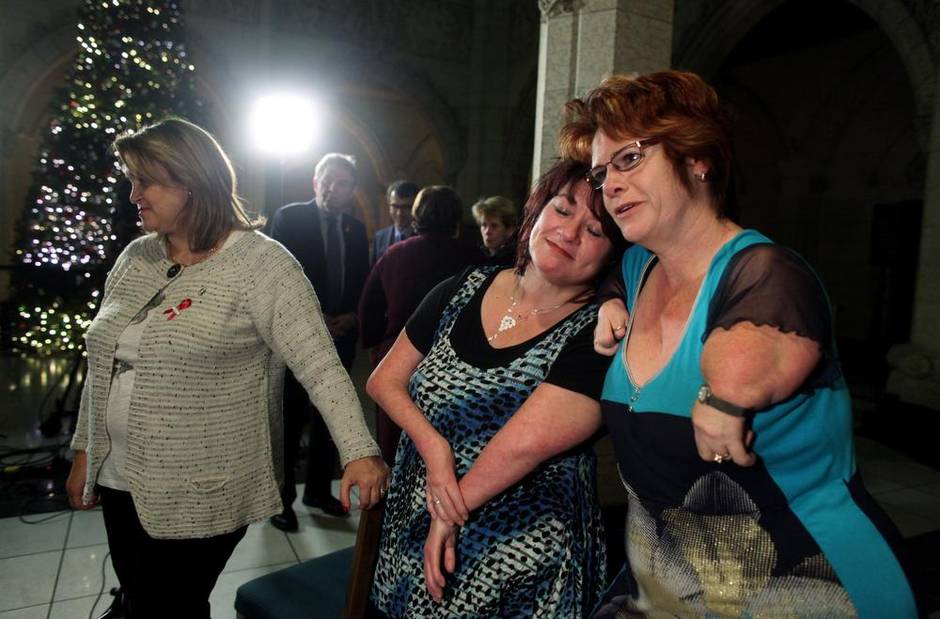 Many of the victims said they wished their parents were alive to see the day’s events. Many mothers and fathers of thalidomide babies endured lifelong guilt for their children’s conditions, even though they were blameless.

“I feel that my mother is watching today from heaven,” said Myriam Bouffard, whose father, a doctor, gave his wife thalidomide during her pregnancy. He never forgave himself.

“My father cried over my cradle when I was born,” said Ms. Bouffard, who came to Ottawa from Quebec City. “This battle we’ve led hasn’t been just for me. It’s for my whole family who suffered so much. I’m thinking of them today.”

Many thalidomide victims said they felt they had emerged from decades of silence. Their parents had taught them never to speak about the out-of-court settlements with the distributor of the drug in the 1960s because the deal involved a gag order. Yet it turns out the sums were not enough to live on into their later years.

“I’ve always tried to put my head down and get on with life,” said Susan Wagner-White, a thalidomide survivor who was born in Perth, Ont., and lives in Ottawa. “Now they [MPs] are talking about me. It’s kind of surreal.” 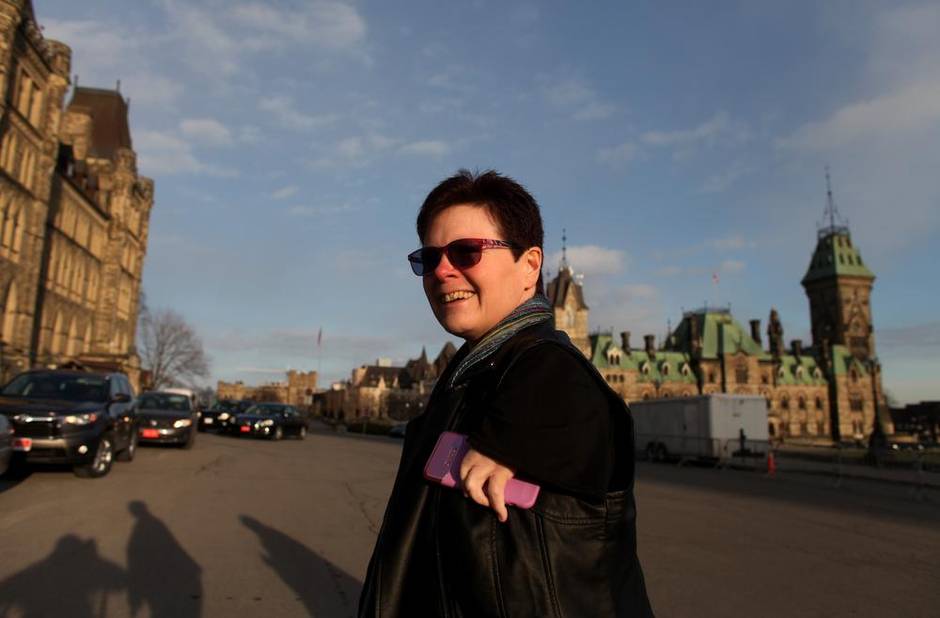 Thalidomide survivor Susan Wagner-White walks on the front steps of Parliament Hill Dec. 1, 2014. (Dave Chan for The Globe and Mail)

Since thalidomide has been in the news, Ms. Wagner-White thinks that perhaps the stares she got at the local mall last week weren’t because of her deformity, as she had long been accustomed, but because the public has finally understood her cause.

She, too, couldn’t stop thinking of her late mother, who suffered a psychological breakdown after giving birth. She had accepted a single thalidomide tablet from her doctor.

“She wore a cloak of guilt all her life; it just about killed her,” Ms. Wagner-White said. Her mother blamed herself for swallowing thalidomide. “She said ‘I was weak, I wasn’t strong enough not to take something.’

“I’m just sorry she isn’t alive to see this.”

Many victims say they realized Monday’s vote was in some ways just the start, and they worry about how the federal government’s pledge of “support” will translate into dollars. The victims’ association is seeking a $250,000 lump sum, plus annual support ranging from $75,000 to $150,000.

“We’re waiting on pins and needles to see if they’re going to live up to their promise. Every government has tried to make sure we were swept under the rug,” Ms. Wagner-White said. “But they can’t do that now.”

Ms. Powell is concerned victims will see a repeat of the 1991 federal government deal, which gave $8.5-million to 109 thalidomide victims born in Canada. The one-time compensation worked out to less than $82,000 per person, nowhere near enough to meet their continuing needs.

“I’m worried they’re going to try to do that again,” Ms. Powell said.

Their needs are both pressing and long term: The strain on their bodies from their disabilities means they are in chronic pain and can no longer cope with everyday tasks such as cooking and cleaning. 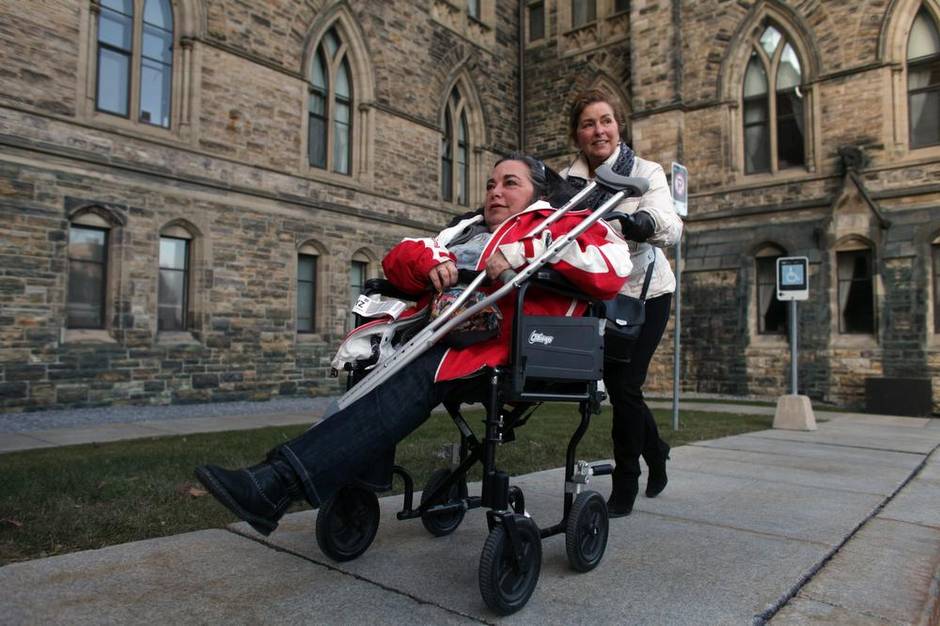 Thalidomide survivor Lianne Powell, centre, and her sister Lisa Powell arrive on the front steps of Parliament Hill Dec. 1, 2014. (Dave Chan for The Globe and Mail)

In Whitby, Ont., the Bainbridge family gathered to watch Monday night’s vote on TV with a mix of skepticism and hope. Parents Chuck and Anne Marie Bainbridge say compensation would let them worry a little less about their daughter, Bernadette, born with severe defects from thalidomide. Bernadette lives with her parents, but Anne Marie Bainbridge suffers from a rare form of arthritis and worries about her daughter’s future. She wants to set Bernadette up in a decent apartment.

“I feel a glimmer of hope,” Anne Marie Bainbridge said. “If she were to get a settlement of some sort, I could sort of rest. It would be a relief – and I need relief.”

Thalidomide survivors across the country watched events unfold from their homes. In Vancouver, Gavin Bamber was moved by the show of support he saw on TV.

“The unprecedented, extended standing ovation by the parliamentarians for the thalidomiders in attendance in the Viewer’s Gallery brought tears to my eyes,” he said in an e-mail, which he typed with his toes. “[Their] unanimous support has given us hope for the future.”

THE WORDING OF THE MOTION

‘That, in the opinion of the House: (a) full support should be offered to survivors of thalidomide; (b) the urgent need to defend the rights and dignity of those affected by thalidomide should be recognized; and (c) the government should provide support to survivors, in cooperation with the Thalidomide Survivors Taskforce.’