Hundreds of protesters took to the streets in several cities across Canada on Saturday, disrupting vehicle traffic as momentum continued to build for the Idle No More movement.

Mr. Gagnon said about 1,000 Via passengers were affected by the blockade, but added Via Rail service would be back on scheduled during what was expected to be a busy Sunday — providing there were no further blockades on the tracks.

Last weekend a similar blockade lasted a couple of hours.

CN Rail, which owns the line, says its staff spotted some protesters tampering with a rail crossing signal device, something that could people's lives at risk.

"Tampering with crossing signals is illegal and poses a great threat to the public, CN will investigate and we will seek to prosecute anyone who was tampering with the signal system," said Jim Feeny, a CN spokesman.

The Idle No More cause, which began last month, is in protest of the federal government's omnibus Bill C-45, which first nations groups claim threatens their treaty rights set out in the Constitution.

Waving flags and carrying placards, many of the demonstrators marched along roadways, highways and bridges — a protest at the Seaway International Bridge near Cornwall, Ont. prompted police to close the border crossing as a public safety precaution.

The usually-busy crossing, which connects the southeastern Ontario city and Akwesasne, Ont., to Massena, N.Y., was closed for more than three hours as demonstrators marched across the toll bridge.

Cornwall Sgt. Marc Bissonnette says police estimate there were about 150 to 200 protesters participating in the action, which was peaceful. No incidents have been reported.

Meanwhile, the border crossing between Sarnia, Ont., and Port Huron, Mich., and a stretch of Highway 403 in Hamilton, Ont., were also temporarily shut down for Idle No More protests.

Those on Sarnia's Blue Water Bridge banged drums, chanted and stood in the middle of the roadway to listen to speeches.

One of them included Greg Plain of Aamjiwnaang First Nation, who was one of the organizers of a recent nearly-two week long blockade on a CN Rail line in Sarnia.

"We just want to get the message out," he said. "It's not just us who should be out there. There are a lot of other Canadians that are out there supporting the natives and anybody else who want to hear it."

Similar demonstrations were also held at the Peace Bridge between Fort Erie, Ont., and Buffalo, N.Y. as well as the Peace Arch crossing in Surrey, B.C.

Police in Ontario also issued a general warning Saturday to travellers to plan ahead because some roads and highways in these areas may face longer than usual traffic delays.

The Idle No More actions were also organized to show support for Attawapiskat Chief Theresa Spence, who has been on a liquid diet since Dec. 11.

Ms. Spence has vowed that she will not eat until she can get an audience with Prime Minister Stephen Harper, the Governor-General and other first nations chiefs to discuss more revenue sharing and economic development for reserves.

A spokesman for Mr. Harper says the prime minister agreed Friday to a meeting with a delegation of leaders from the Assembly of First Nations. Ms. Spence has said she intends to be at the meeting, which has been set for Jan. 11.

Idle No More: Who is participating and why? Submit your story
January 7, 2013
Sarnia railway clear after judge orders end to native blockade
January 2, 2013 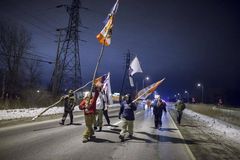 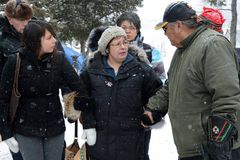 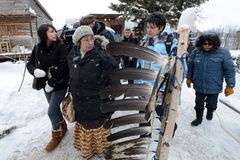