When Peggy Peterson pitched a tent at the picturesque Bala Falls, in the Lake Muskoka region of Ontario, she thought that she'd camp out for a few days and that many would join her cause against a proposed hydroelectric plant.

Her insurgency, however, has become a long, solitary battle.

Residents of Bala have provided her with food, an outhouse and a camper van, but no one has committed to joining her demonstration. For more than 100 days, it's mainly been just her and her sheltie, Lucy, and they're digging in for the winter – and likely longer.

"Until it's stopped, I'm not leaving," Ms. Peterson vowed recently over the phone from the home of one of her new neighbours.

"How a downtown waterfall like this can be given away by the government to a private, for-profit company without any benefit to Bala? It's just cash-for-life for a handful of private individuals."

A 55-year-old permaculture educator from Huntsville, Ont., Ms. Peterson wasn't even aware of the Bala energy project until the Wahta Mohawks staged a protest in August. After listening to Chief Phillip Franks' concerns, she told him she would do what she could to help.

"The only thing I could think to do was to pitch a tent," she recalled.

Ms. Peterson's one-woman campaign is among the latest barbs in a protracted battle against an Ontario government plan to resurrect a power plant in lake-studded Muskoka. Awarded to Swift River Energy in 2005, the 4.5-megawatt power-plant proposal sparked a grassroots movement called Save the Bala Falls.

"Stop the hydro plant" signs are everywhere in this small recreational community north of Toronto – one of many green-energy skirmishes to flare up as the provincial government aggressively expands renewable power's footprint, offering to pay lucrative rates to developers.

Wahta Mohawk First Nation registered its opposition to the project in August, sending letters to Premier Kathleen Wynne and Prime Minister Stephen Harper. The aboriginal community contends it hasn't been properly consulted on the proposed site or on the closing of a historically significant portage.

Meanwhile, a documentary on the hydroelectric battle is in the works. Rob Stewart, director of the award-winning film Sharkwater, spent time in Bala as a kid, chasing fish and turtles in its waters. The trailer for his new documentary implores: "It's not a done deal."

But the power deal is rippling closer. Ontario's Ministry of Natural Resources is giving the project one last look and a change of mayor in the Bala region may smooth the path for Swift River Energy.

Former Township of Muskoka Lakes mayor Alice Murphy, ousted in the October municipal election, had expressed strong concerns about the energy project. Ms. Murphy, who owns property along the Moon River, supported the township's legal bid to have the provincial government recognize the public's right to portage a historic canoe route at Bala Falls – a move that slowed Swift River's progress and would have effectively quashed the power proposal, if successful.

The legal challenge failed. The Ontario Court of Appeal rejected the municipality's case in July, ruling that the protection of public safety trumps canoeists' access to portages and shorelines on Crown land. Newly elected Mayor Don Furniss, previously a councillor, supports the province's portage ban, saying there are other canoe-carrying routes nearby.

Mr. Furniss, who lives in another part of the three-ward township, "firmly believes" the hydroelectric power plant will be built. He said the municipality's refusal to negotiate with the developer has pushed Swift River Energy to a less-desirable building option for Bala. He wants to work with Swift River to reduce the plant's long-term impact on the community.

"It would certainly be easier on residents of Bala and the wallets of our taxpayers if there was no hydro development at this location," Mr. Furniss said in an e-mail. "However, I believe it will happen and I want to work out the best solution for our residents."

Swift River Energy vice-president Frank Belerique is optimistic the company can forge a better relationship with the township. At a recent council committee meeting, he proposed forming a working group to re-examine construction options.

Although the project has taken a lot longer than anticipated, Mr. Belerique said Swift River Energy remains committed to building the power plant. A hydroelectric facility last operated in Bala six decades ago.

"We believe it's a good project," he said. "The environmental impacts are very low. You couldn't have asked for a better project from an environmental perspective. There's no flooding involved. The dam is already there. There is a transportation network in place."

The power plant's detractors, however, think the project will have a negative effect on the environment, recreational water users and businesses in Bala. The north and south falls are a major draw for residents and tourists.

"There are serious public safety and economic concerns and we just think the right people haven't heard them yet in the right light," said Mitchell Shnier, a member of Save the Bala Falls group.

The Ministry of Natural Resources is completing its review of Swift River Energy's application for approval under the province's Lakes and Rivers Improvement Act, spokeswoman Jolanta Kowalski said. The company received a land-use permit from the ministry in mid-November, allowing Swift River to occupy Crown land, move equipment to the site and install fencing. A building permit from the township is still needed.

Peggy Peterson believes the project can still be stopped.

She camped at the banned portage site nearly day and night from September to the beginning of November before moving her demonstration to another spot in Bala. She heads home in the evening these days and was in Huntsville during the Christmas week to spend time with her family.

When she returned to Bala on Monday, flags donated by the Wahta Mohawks were missing, along with a small tent and other items. Their disappearance surprised her, but she believes she has the support of many in Bala.

"The community has been feeding me, visiting me and bring me firewood," Ms. Peterson noted. "This," she said of the power-plant proposal, "is a mistake that has to be fixed."

Wahta Mohawks to portage in protest of hydro plant in Muskoka region
August 27, 2014 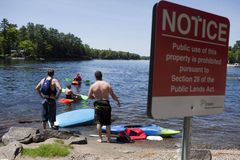 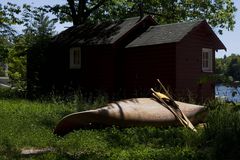 Public’s right to portage at heart of Crown-land case
July 14, 2014 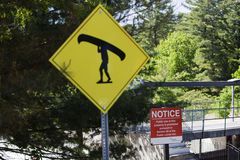