If you ride a bike in Toronto, you're most likely to be injured negotiating a slippery streetcar track. For cyclists in Vancouver, however, it's a run-in with a car that'll probably put you in the hospital.

Those are the preliminary findings of a large study of bike injuries that is attempting to figure out which places on the streets and paths of two of Canada's biggest cities are the most dangerous for those travelling on two wheels.

Researchers on the study, being co-ordinated by the University of British Columbia's Cycling in Cities program, interviewed 690 cyclists injured in Toronto and Vancouver in 2008 and 2009. The data on the routes they were following at the time of injury are being carefully examined, to determine how biking infrastructure affects accidents.

Detailed results won't be ready until next year, but early findings - from about 150 interviews in each city - show very different pictures depending on where people ride.

"There are two main clusters in downtown Toronto," said Steven Friedman, an emergency doctor at Toronto's University Health Network who is involved in the study. "Out of 150 [accidents] roughly one-third involve streetcar tracks." In many cases, cyclists hit the tracks while avoiding double-parked cars or cars moving out of parking spaces, he said.

The other big Toronto cluster was "dooring" - cyclists hit by a car door opening as they pass a parked car.

In Vancouver, by contrast, the highest proportion of bike injuries resulted from collisions with cars. And on the West Coast, it is also much more common for cyclists to be hurt after running into pedestrians or other cyclists.

Dr. Friedman, who is presenting the preliminary statistics at a conference of the Canadian Association of Emergency Physicians in Montreal this week, acknowledged the results are skewed somewhat because all the Toronto hospitals in the study serve the downtown core, where streetcar tracks are concentrated. Vancouver has no streetcars.

Still, the detailed results could eventually help direct city planners so they can design cycling infrastructure to make it as safe as possible, and thus encourage more people to ride, said UBC professor Kay Teschke, who is managing the study. She acknowledged many accidents are caused by human error, but added the physical environment where the mistakes take place often determines whether there is an injury.

The study will crunch data on the paths taken by each of the 690 injured people, along with the road surface, lighting and weather, to see what factors might have increased the risk of injury. Prof. Teschke hopes full results will be out early in 2011.

Arno Schortinghuis, president of the Vancouver Area Cycling Coalition, is a participant in the study - he was injured in a bike crash after getting cut off by a driver. For him, one key to reducing injuries is to get more cyclists on the road. "Better cycling infrastructure gets more people riding bikes," he said, "[and]there is an associated corollary, that the more people who are riding bikes, the safer it is for all cyclists." That's because when motorists expect to see more cyclists on the road, they tend to be more cautious and accommodating, he said.

Mr. Schortinghuis, who jockeys with car traffic on Vancouver's streets virtually every day, said separated bike lanes or off-road paths are by far the best way to attract more cyclists, because they are assured of being safe.

Toronto Cyclists Union executive director Yvonne Bambrick said she is looking forward to the final results of the UBC study because they will shed light on all the factors that cause accidents, including driver and cyclist road-sharing behaviour and the state of the roads.

"One of the biggest hazards right now is the state of our roadways," she said. "I'm having to cycle looking down … rather than looking ahead to see if a car door is opening in my path or if a pedestrian is going to walk out."

Transport Canada's most recent statistics show that in 2007, 65 cyclists were killed and 7,023 injured across the country.

Dr. Friedman, who sees the consequences of bike accidents in his emergency room, said his advice for cyclists is to be particularly wary of streetcar tracks - which tend to catch bike tires and can be extremely slippery when wet - and cross them at acute angles. He also said cyclists should redouble their vigilance for car doors, and watch for taxis making U-turns.

Dr. Friedman also says it is crucial for cyclists to signal, to wear reflective clothing at night and avoid drinking alcohol before riding. Most of all, he said, cyclists should wear helmets. 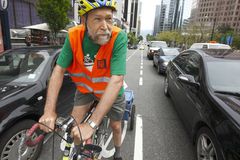