When naturopath Nicole Redvers saw that Indigenous people at risk on the streets of Yellowknife were not seeking conventional treatments such as counselling, she began working to bring both modern and traditional forms of treatment to the capital of the Northwest Territories.

Ms. Redvers, along with her peers at the Arctic Indigenous Wellness Foundation, envisioned a natural space that would bring healing techniques such as traditional food preparation to an urban setting.

"We're one of the last places in Canada actually, in addition to Nunavut, where there's not a place where Indigenous people can gather and have their culture represented," said Ms. Redvers.

In the past year, Ms. Redvers, along with a group of Dene, Inuit and Métis elders and professionals, have worked toward building an urban land-based site that will fuse language revitalization, Indigenous cultural education and tool making with modern forms of treatment such as counselling. The space will include tents and will be in walking distance for Indigenous people on the streets who are at risk of substance abuse, homelessness, depression, and incarceration.

"We're bringing the land to them, but at the same time we're providing some of this on-the-land programming which we would only [otherwise] be able to do if we brought people out of the city boundaries," Ms. Redvers said. "We're hoping that it will be an example to many other areas in Canada."

A program aiming to improve food security by teaching traditional wild food skills was also in the running for the $1-million prize.

A Yukon-based project dedicated to the revitalization of the Indigenous practice of peacemaking circles and an Inuinnait cultural school were each awarded $500,000.

Lori Duncan, team leader of the "Our Families, Our Way: The Peacemaking Circle" project, says that revitalizing the Indigenous practice of the peacemaking circle will bring families together in the Arctic.

"The program itself is a venue or place to come together and develop courage and the capacity to actually do things in circle," Ms. Duncan said.

The project also introduced the Family Act, community-based legislation that incorporates traditional values and practices such as circle sentencing to help families with conflict resolution and decision-making. The practice of circle sentencing is dedicated to solving community issues by bringing offenders together with family, elders and children to decide a sentence that does not include jail time.

"The legislation itself talks about rebuilding relationships, generating collaborative responses to heal families, readdress causes of family breakdown and enables us to collaborate with all communities," Ms. Duncan said.

In 2012, philanthropists Arnold Witzig and Sima Sharifi launched the Arctic Inspiration Prize, aimed at recognizing Arctic knowledge and innovation; initially set at $1-million, the total amount for 2017 has grown to $3-million. AIP is managed by the Rideau Hall Foundation.

The former governor-general of Canada, David Johnston, is on the national selection committee, a group comprised of people from the North and South that decide which projects are nominated and awarded. He is also the chair of the Rideau Hall Foundation.

"The first principle is to recognize these initiatives in the North, by the North for the northern people," said Mr. Johnston of how the projects are selected.

This year, AIP created a new category that awards up to $100,000 to young innovators for their community projects.

"This is about starting earlier with innovative ideas and getting young people engaged who will be ambassadors for the prize and ambassadors for innovation in the North," said Mr. Johnston. 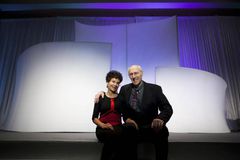