Arch MacKenzie, an inspiring journalist who oversaw the Ottawa bureau of The Canadian Press during some of the most tumultuous political events of the 1970s and 1980s, died Monday. He was 88.

During his time in Ottawa, MacKenzie was regarded as a model boss, and was a powerful influence on a generation of reporters and editors.

He kept active in retirement, serving as a judge for the Michener awards for public service journalism, and as an executive member of the board of the Michener Awards Foundation.

He suffered a ruptured aneurysm in January and while doctors stabilized the problem, his health became increasingly precarious and he suffered a couple of strokes, his son Colin said. He eventually developed pneumonia.

"It was peaceful and we were all there," Colin said of his father's death in Ottawa.

MacKenzie was born in Regina on March 13, 1926, and raised on a farm outside the city.

He served 18 months in the army at the end of the Second World War. He then enrolled at the University of Saskatchewan, where he was sports editor of the student newspaper.

He joined The Canadian Press news agency in the early 1950s, but was fired during a failed effort to unionize the news service. He ended up working for Reuters in London, England.

While in London, he was rehired by Gil Purcell, then head of the agency and noted for his penny-pinching.

"He rehired him (Arch) because it was cheaper than sending somebody over," Colin MacKenzie said.

MacKenzie then worked in Montreal, Ottawa and Washington, before returning to Ottawa as deputy bureau chief and bureau chief. He later joined the Toronto Star as Ottawa bureau chief.

It was a time of political storms. Joe Clark's short-lived government fell in 1979, to be replaced by a resurgent Pierre Trudeau. That was followed by the patriation of the Constitution and later the Brian Mulroney sweep of 1984.

"During all this time, he was the ever-gruff, but always caring, boss who, when he asked 'got a minute' to join him in his office, meant exactly 60 seconds or less — no more," Sheppard said.

"He was always honest. He could be counted on in the clutch. The world of journalism is a sadder and lesser place without him."

Norma Greenaway, who worked for MacKenzie from 1979 to 1985, remembered him fondly.

"He was a terrific boss for a young journalist learning the ropes of the nation's capital," she said. "He was tough, but fair. He treated his reporters the same way he thought we should treat the people we covered."

"When I think of Arch I think of his integrity, his intensity, and the rigorous application of the highest journalistic standards.

Doug Small worked with MacKenzie in the 1970s before moving to television journalism.

"He left an enormous impression on me," Small said. "He was an exemplary boss and my idea of what great Ottawa bureau chief should be."

Peter Bregg, an award-winning photographer who worked with MacKenzie, called him "one of the most decent bureau chiefs I have worked for. He was always supportive for me and I will always appreciate his kindness."

MacKenzie is survived by his wife Isobel, sons Colin, Alex and Malcolm and seven grandchildren.

There will be a private service for the family, Colin MacKenzie said, with a memorial in September.

From politics to music, Ted Blanchard got things done
June 22, 2014 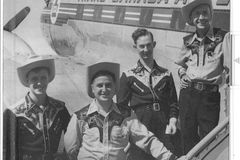