A blistering internal report on the Parti Québécois describes the party as a sclerotic, disconnected social club for aging baby boomers that is widely perceived by potential supporters as inhospitable to youth and diversity.

And that's not even the worst news for the 48-year-old party.

Quebec independence – the raison d'être of the party and the stated aim in Article 1 of its constitution – has fallen so far out of favour that many supporters don't dare talk about it in public, according to the report by Paul St-Pierre Plamondon, special adviser to PQ Leader Jean-François Lisée.

"The relationship to independence is problematic. Young people may be sovereigntists in their heart but independence has an image of turning inward, of ethnic nationalism, of resistance to change," Mr. Plamondon wrote. "They don't have frustrations or accounts to settle with Canada. They want to know what would be constructive about their own country. They don't want to stop change, they want to hasten it."

The report made public Wednesday was the product of several months work by Mr. Plamondon, a defeated leadership candidate and relative newcomer to the party. His assignment from Mr. Lisée was to meet with 1,800 potential and current PQ sympathizers in small gatherings across the province and report on their relationship to the PQ. He delivered 108 recommendations to revitalize the party.

The PQ leader admitted some of it was difficult to read. "I asked him to be frank and report on why people are refusing to join or turning their backs on the Parti Québécois," Mr. Lisée told reporters. "He did it."

About 68 per cent of the PQ's membership is over 55 while 14 per cent is under 40 – a fact visible to anyone who has attended a party meeting recently. Those demographics bode poorly for growth for a movement that was originally built on the nationalist dreams of youth. "In the PQ, youth are like those rare Pokemons that people search for for years and when you find one you make sure to include them in the photo," the report said.

When asked if his party is disconnected from youth, Mr. Lisée replied: "We are not sufficiently connected."

At the same time the party's 90,000 members are more than double the membership of the Quebec Liberal Party, which has an even worse problem attracting youth, Mr. Lisée said. "There are things here that are perception, that are false perception, and things that are troublesome. But it's clear we have to reconnect to younger people, to diverse Quebec and to entrepreneurs."

The PQ has been in a long slow decline since the 1995 referendum when it nearly led the province to independence. The party has held power for just 18 months in the past 13 years and seen a steady decline in its share of the popular vote. Nationalist upstarts on the left and right have slowly eaten into its vote share. Support for sovereignty has polled closer to 35 per cent in recent months after hovering in the 40s for most of the past 20 years.

The report described in detail how outsiders feel party structures dominated by older generations freeze out more youthful party activists. Among other suggestions is to "put away the posters of 1995" and veer off from the nostalgia that dominates among senior party activists.

There were slivers of good news in the report. The vast majority of PQ members say they are in favour of greater diversity in the party. But that has been a long-standing aim of the party, which published its 1975 platform in Greek, Italian, Portuguese, Arabic and Spanish. This report mentions diversity 55 times, mostly to note the PQ still lacks it.

The party has long been against "Canadian-style" multiculturalism, believing the only way to preserve Quebec's language and culture is to integrate immigrants more completely, making diverse communities difficult for the party to approach.

The most recent incarnation was in 2013 when the party proposed a "Charter of Values" to limit religious expression in the public service. It was widely perceived as an attempt to capitalize politically on the backs of minority groups, the report said. 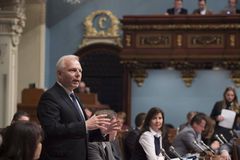 Debate over wearing religious symbols returns to Quebec one week after mosque shooting
Quebec media, politicians express regret over Islam rhetoric in wake of mosque attack
Follow Les Perreaux on Twitter @Perreaux
Report an error Editorial code of conduct
Due to technical reasons, we have temporarily removed commenting from our articles. We hope to have this fixed soon. Thank you for your patience. If you are looking to give feedback on our new site, please send it along to feedback@globeandmail.com. If you want to write a letter to the editor, please forward to letters@globeandmail.com.
Comments