Tens of thousands of international students affected by a faculty strike at Ontario colleges are being reassured by immigration officials that they won't be penalized for a delay that is beyond their control.

But some international students say the work stoppage, which began last Monday, has them worrying about finances as well as their education and immigration status.

Thomas, who came to Canada two years ago from India, said each week on strike represents a loss of roughly $800 in tuition fees, not to mention the additional money spent on rent if the semester is prolonged once faculty return to work.

And though he has a job at the Liquor Control Board of Ontario, Thomas said international students are limited to 20 hours of work per week. What's more, he said, uncertainty over the length of the strike prevents students from scheduling additional shifts.

Schools should be giving refunds for the time lost, he said – a sentiment expressed by domestic and international students alike in a petition that had garnered nearly 100,000 signatures by Sunday morning.

Several colleges in the province said they recognized the concerns raised by the strike and hoped it would end before the more than 40,000 international students enrolled in Ontario colleges felt financial – or other – difficulties.

Officials at Humber, George Brown and Confederation colleges also stressed that other services remain available during the strike, including support for international students concerned about their visas or study permits.

"We haven't started down the path of refunds yet," said Kim Smith, associate director of international admissions and student services at Humber College, where some 5,000 international students are enrolled.

"In the past, this has always been decided by the province and not by an individual college so at this time we're kind of waiting to see what comes out of that," she said.

A spokeswoman for the Ontario ministry of advanced education and skills development would not say whether the province was considering refunds.

"We are optimistic that the two parties will return to the table to work to reach a successful, negotiated settlement that is in the best interests of all parties, with a focus on students and their learning," Tanya Blazina said in an e-mail.

"I know that all students, domestic and international, are upset about the strike, and understandably concerned for what the impact could be on their education. While the uncertainty students face is challenging, I want them to know that previous college strikes have not led to students losing their semester."

Meanwhile, Immigration, Refugees and Citizenship Canada is seeking to relieve international students' fears about the fate of their visas and permits.

"Study permits include the condition that the student must make continual progress towards the completion of their program," said Beatrice Fenelon, a spokeswoman for the department.

"However, international students whose studies have been affected by the labour dispute at some designated learning institutions in Ontario will not face enforcement action for being unable to fulfill that condition, as it is a circumstance beyond their control."

International students who need to apply for extensions should include with their application a letter from their school's registrar confirming the impact of the strike, she said.

And while students are required to have studied continuously in order to qualify for a post-graduation work permit, the interruption caused by the strike won't affect their eligibility, she said.

John Porter, director of international admissions and student services at Toronto's George Brown College, said most students have study permits that span the duration of their program, plus a 90-day grace period afterwards so they can apply for a post-graduation work permit.

Permit extensions are "fairly common" even in a normal school year, said Porter, himself a regulated international student immigration adviser.

"We're not really expecting that because of this current work stoppage situation that we'll have a really great increase in the need for study permit extensions unless it goes beyond X number of weeks," he said.

Thomas, whose program and permit are scheduled to end in December, said there won't be enough time to apply for a work permit if the school year encroaches on the 90-day grace period, since that process can take months.

So the strike could also put international students' job prospects at risk, he said. "If everything goes alright, I would like to stay here to experience more." 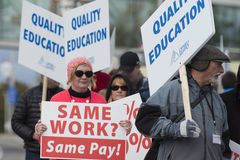