She was the artist who put the contemporary in contemporary Inuit art, a catalyst for other Inuit artists, young and old, to deal with life as it was in Canada's North, an award-winning international standard-bearer. And now Annie Pootoogook is dead at 47.

Officials with the West Baffin Eskimo Co-operative in her hometown of Cape Dorset confirmed Friday afternoon that the woman whose body had been recovered Monday morning from the Rideau River in Ottawa was Ms. Pootoogook.

Police said they were not treating the incident as a homicide but crime investigators are seeking the public's help in retracing the artist's last hours and days.

Ms. Pootoogook had been living for roughly the past nine years in Ottawa, sometimes on the street and in shelters, sometimes plagued by alcohol and drug abuse and, in 2012, an unwanted pregnancy. She'd relocated there from Nunavut in the wake of a string of major artistic successes in southern Canada and internationally. These included an acclaimed solo exhibition, in 2006, of her ink, crayon, pencil and chalk drawings at Toronto's Power Plant Contemporary Art Gallery, one of Canada's premier venues for cutting-edge art. This in turn led to her winning the $50,000 Sobey Art Award that same year, given annually to an artist of singular talent under 40. In 2007 she was invited to participate at the prestigious Documenta 12 showcase, held every five years in Kassel, Germany. Two years later, she was given a solo show at New York's National Museum of the American Indian George Gustav Heye Center.

In photos: The work of artist Annie Pootoogook

Ms. Pootoogook, who began drawing in 1997, was the granddaughter of Pitseolak Ashoona, one of the earliest Cape Dorset drawers and print-makers. Her mother Napachie was a prolific graphic artist while father Eegyvudluk was similarly esteemed as a carver and print-maker.

However, after her triumphs of 2006-09, Ms. Pootoogook's output slowed, then seemed to stop. Toronto dealer Pat Feheley, who'd given Ms. Pootoogook her first commercial bow in 2001 as part of a group show called The Unexpected, then her first solo outing in 2003, told The Globe and Mail in July of 2012 that she hadn't received an original Pootoogook drawing in more than three years.

In an interview Friday, Ms. Feheley said she was "stunned" by the loss. "She had a rough couple of years but I always thought she'd be back. We'd go back to Dorset and the image bank she would have had would have been amazing."

Ms. Pootoogook's art, at least initially, was almost a kind of therapy, Ms. Feheley said. "It was simply to get it out of her head. She didn't particularly care if they sold or not."

Tributes were quick to pour in.

Andrew Hunter, Canadian art curator at the Art Gallery of Ontario, called her "a profoundly influential artist who had the courage to push the boundaries of Inuit art."

Academic curator Gerald McMaster said "her legacy will not be forgotten, in that she leaves us thinking about the same troubled world she was brave enough to depict."

Nancy Campbell, former AGO associate curator of special projects, spoke of Ms. Pootoogook's "poignant, often difficult pictures" being "a crucial part of opening the dialogue about art-making in the North." 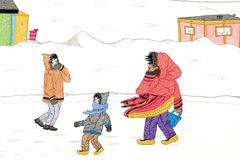 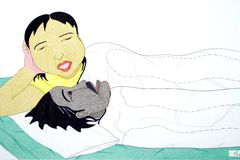