Sex offenders should be banished from Inuit communities, a spokeswoman for a women's group in Labrador has told the National Inquiry into Missing and Murdered Indigenous Women and Girls.

"It is up to us women to take our communities back and let these perpetrators know: No more. Out you go. You are not welcome here," Kim Campbell-McLean said Wednesday as the inquiry began two days of hearings in Happy Valley-Goose Bay.

She said too many communities have normalized abuse of all kinds, and in too many cases it isn't even recognized.

"We need to call it out for what it is as it's happening. We need to hold people accountable for their actions and behaviours that are causing so much hurt to others," she said.

"We must educate our children and our young people about abuse – all forms of abuse – what it looks like, what it means. They need to know when things are wrong."

Campbell-McLean said suicide among youth is a major concern and a source of deep suffering for her people.

She told the inquiry that their communities need federally funded women's shelters, and schools should teach children to speak out about abuse.

About two dozen family members and survivors are expected to address the two days of hearings, although most will be in private.

There was emotional testimony from Gordon and Silpa Obed of Nain whose son died of tuberculosis, and his wife, Katie, was later killed in an abusive relationship.

"Our world got turned upside down," Gordon Obed told the inquiry.

The hearings were halted a number of times as Silpa Obed wept as she spoke about her daughter-in-law and the fact that her four grandsons have been placed in foster care.

Gordon said the boys have changed and would be better off if placed with the family.

Meanwhile Charlotte Wolfrey of Rigolet gave emotional testimony about her daughter, Dierdre Michellin, who was killed in an abusive relationship in January 1993.

Wolfrey said she used her grief to push for greater police coverage for northern communities – finally getting a police detachment in her community eight years later.

During the opening ceremonies, commissioner Qajaq Robinson said it was important that people had the courage to tell their stories.

"Thank you for your determination to teach the country what needs to change," Robinson said.

"This is not an Indigenous problem. This is the impact of colonization and ideologies and ideas that are founded on this idea that Indigenous people do not know best and that other people can make decisions for Indigenous people."

She said it is important to hear the stories from all parts of the country.

The federal government set up the inquiry in December 2015 to address the high number of missing and murdered Indigenous women and girls.

The commissioners began the inquiry in September 2016 and were hoping to issue a final report by the end of 2018, but are formally asking for two more years to finish their work.

The commission has so far heard from more than 760 witnesses.

Wally Anderson, the mayor of Happy Valley-Goose Bay, also addressed the inquiry, saying the final report can't be put on a shelf to collect dust.

"This cannot happen," he said. 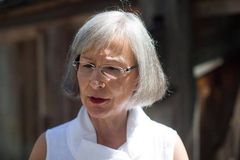 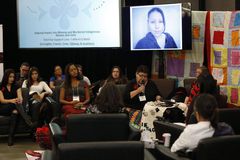 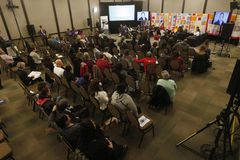