For three days in April, Chantelle Prentice camped outside in Salmon Arm, B.C., guarding her place in line – not for concert tickets or the latest iPhone, but to snag one of 17 coveted French immersion spots at Bastion Elementary School for her five-year-old son, Taylor.

An anglophone who hated her own high-school French courses, Ms. Prentice still feels strongly that bilingualism is central to Canada's identity, as well as a gateway to other languages.

"I don't think there's enough young people speaking French and keeping it going in our country," she said. "But I also appreciate diversity. So Mandarin and Punjabi, all those are absolutely great. If my son has an opportunity to dabble in other languages, then I would definitely be supportive of that as well."

Demand for French immersion programs has been steady or rising across the country for the past decade.

But with more than five million Canadians speaking a mother tongue other than English or French as of 2006 – and projections say that number will rise when the 2011 census data is released this fall – school boards have begun adding other languages to the curriculum. Employers will say that while French is still highly valued as a second language, others are gaining ground, notably Spanish and Mandarin.

Given this, is bilingualism as an official policy still relevant to Canadians?

On the eve of St. Jean Baptiste Day, which celebrates Quebec francophone culture, heritage and the French language, The Globe and Mail asked readers to respond to that very question.

Based on responses to our reader callout, 57 per cent said they think it's important for Canadians to speak both official languages. The cross-country snapshot also showed that 53 per cent of the respondents said they are bilingual, with another 20 per cent describing themselves as passable in French.

Few would say that Canada should do away with the Official Languages Act. Instead, there is a growing movement toward embracing institutionalized multilingualism as a part of Canadian identity.

With the deadline for doubling the proportion of youth bilingualism looming, the target seems all but unreachable.

On top of that, the census data from 1996 to 2006 indicate that bilingualism has stagnated for francophones in Quebec and is on the decline for anglophones outside Quebec, according to a 2008 Canadian Council of Learning report. The group also found that knowledge of a second language tends to diminish after leaving school.

Education, however, is a provincial, not a federal matter, so while Canada's official languages watchdog called Ottawa's 2003 goal laudable – a doubling of bilingualism by 2013 – it was never the idea behind the Official Languages Act.

"The policy was never to make all Canadians bilingual," said Graham Fraser, Canadian Commissioner of Official Languages. "Instead, what it guarantees is that no matter which language you speak – English or French – you can get the same level of service."

It's not cheap. The Fraser Institute's January study showed taxpayers foot an annual bill of $2.4-billion for federal and provincial bilingual services.

The Conservatives' commitment to bilingualism came under fire last year over Supreme Court Justice Michael Moldaver's inability to speak French, and became further inflamed with the selection of Michael Ferguson, an anglophone accountant from New Brunswick, to be the next Auditor-General.

Figures from the Office of the Commissioner for Official Languages show that 72 per cent of Canadians favour bilingualism across Canada, with the strongest regional support in Quebec, followed by Atlantic Canada. Even in Alberta, which has the lowest level of support, close to six in 10 favour bilingualism for all of Canada.

Some, like Senator Mobina Jaffer, say it's time for Ottawa to move beyond recognizing English and French. When Parliament resumes in the fall, she will introduce a private member's bill that asks the government to play a leadership role in promoting other languages in schools.

"European and Asian countries do it so much better," she said. "It's given in the schools that students will learn to speak two to three languages fluently. We need to get there, too, because that will help us economically with trade opportunities and promote more cross-cultural dialogue."

Some 338,000 students across the country study in school-based French immersion programs and another 1.5 million are taking core courses, according to Canadian Parents for French .

While enrolment has jumped drastically since the 1970s, recent growth has been slow – not nearly fast enough to meet the ambitious target set by the Privy Council in 2003: to make 50 per cent of those aged 15 to 19 bilingual by 2013.

Most provinces have seen eligible enrolment in immersion increase by between 1 and 4 per cent since 1999, but the numbers enrolled are highest in Eastern Canada. In British Columbia, a rush to French immersion has been tempered by caps on available spaces, leading parents to camp overnight in cities such as Nanaimo for first-come-first-served signups.

The attraction is often pragmatic – the programs are seen as akin to private or gifted education, or as expanding a child's job prospects later in life. But educators say a strain of nationalism is still an important reason why parents enrol their children to study both of Canada's official languages.

"I've been quite surprised and moved," said Robert Rothon, national executive director of CPF. "They really do believe in a bilingual and bicultural Canada."

That sentiment is evident even in Alberta, where support for French-language instruction is generally considered weaker, but where the Calgary Catholic School District is reshuffling its French immersion programs, shuttering English streams in some locations to create new immersion-only schools.

"[Our parents] feel that creates a stronger community and culture, and a stronger dedication to the French language," said Andra McGinn, the district's superintendent for instructional services.

Meanwhile, classes teaching languages that some see as more relevant today – Spanish, Mandarin or Punjabi, for example – have been multiplying across Canada. Yet their ascent hasn't noticeably eroded French instruction, and allophone parents show a keen interest in both English and French instruction for their children, despite a variety of policies that have historically excluded them from in-school French programs.

If anything, as multilingualism has become more institutionalized, enrolments in all languages have so far tended to rise in step with French.

Being bilingual is still considered a competitive edge in Canada's job market, but where French was once the undisputed second language of choice among employers, others are gaining ground.

Some 84 per cent of Canadians believe speaking French and English offers a better chance of finding a good job, says a 2006 survey by the Commissioner of Official Languages. Some 89 per cent think those with any two languages will have more success "in today's global economy."

Although nearly 2.8-million Canadians said in the last census they use more than one language at work, most Canadian jobs outside the public service still don't require bilingual fluency, said Jeff Aplin, president of the national recrui ting firm David Aplin Group. But more and more, standing out from other applicants comes down to "soft skills," where languages rate highly.

"Employers want to hire people that are creative in their thinking and in their work," Mr. Aplin said.

A growing body of research shows that those who learn another language do gain cognitive advantages. Areas of the brain controlling our ability to sort through conflicting information, or to retain memory later in life, are stronger in bilinguals, McGill University psychology professor Fred Genesee said.

"Acquiring and using two languages is a kind of mental exercise [and] has spinoff effects," Prof. Genesee said.

French remains the second language most Canadian employers look for outside Quebec, especially in eastern provinces where official-language bilingualism is strongest. But the demand for people who can work comfortably in the world's other powerhouse economies is rising fast, especially in "customer-facing" jobs in areas such as tourism, hotels, airlines and retail banking.

"Bilingualism is certainly going to extend beyond the official languages of our country. We do get requests for people who are bilingual with Spanish and English, as well as Mandarin or Cantonese and English," Mr. Aplin said. "They're catching up, for sure. I'd say they're pretty close."

Balwant Sanghera is 100-per-cent committed to bilingualism, and supports English and French instruction in schools. He just wishes those weren't the only options for second-language courses.

"Here in Surrey and Abbotsford, Punjabi has overtaken French as the most spoken language," said Mr. Sanghera, president of the Punjabi Language Education Association. "It's the language you'll hear most often in shops and businesses and at home."

His B.C.-based group wants to see official federal recognition of Punjabi, and says the official two-language policy is out of touch with the reality of changing national demographics. The group has been lobbying for the past 20 years, and now B.C. schools and universities have introduced Punjabi, while many hospitals, airports, markets and banks display signs in the language.

"It's not just about keeping the language alive for the immigrant community, although, yes, that is a motivation for many parents," Mr. Sanghera said. "I don't think it will create ethnic enclaves. In Canada, we celebrate multiculturalism officially. I think that should also expand to include support for multilingualism officially. It shouldn't be just extra classes or private schools."

But if Canada were to introduce official languages based on immigrant patterns, the situation would be in flux with every passing generation, said Graham Fraser, Canada's commissioner for official languages. "If you look at the immigration patterns of this country, by and large immigrant languages do not survive the third generation," he said.

"The third-generation immigrant tends to use English and French as their dominant language, and yet you're not seeing that diminution on the part of the French-speaking community in Canada," Mr. Fraser said. "There are more French speakers in Canada now than there ever have been." 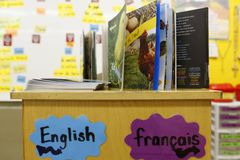