Jack Rabinovitch, the Montreal businessman who, by establishing the Giller Prize in the wake of his wife's death, ultimately became one of the most important and influential forces in contemporary Canadian literature, died on Sunday. He was 87.

Despite never having worked a day in the book publishing industry, and not being a writer himself, there are few, if any, individuals who have left such an indelible mark on the world of Canadian letters. He was a champion of writers, and of books and the written word, and in creating the award named after his late wife, Doris Giller, Mr. Rabinovitch sought to not simply honour her memory but to share her passion with as many readers as possible.

"Let's be clear: No one is ever obligated to give their time and energy to create something as prestigious as the Giller Prize, but Jack Rabinovitch did," said David Adams Richards, co-winner of the prize, for his novel Mercy Among the Children, in 2000. "In doing so, his spirit was revealed to all Canadians; that of a generous patron, a loyal husband and friend and a great man. I will always remember his kindness to writers from all walks of life. And writers from all walks of life benefited from his simple unaffected goodness."

Mr. Rabinovitch was "a giant," according to his long-time friend and former Ontario premier Bob Rae, not only for his philanthropy toward literature, but also for his work spearheading the expansion of the Princess Margaret Hospital in his adopted home of Toronto.

"He was certainly a giant and he was a powerful presence in many lives. People across the country have been touched by him and will have powerful memories," said Mr. Rae, who was at Sunnybrook Hospital where Mr. Rabinovitch died on Sunday. Mr. Rae said that Mr. Rabinovitch's daughters and family had kept vigil since he fell at home the previous Thursday.

Writer Margaret Atwood said he was a great man who will be "much celebrated and much missed."

Mr. Rabinovitch founded the Giller Prize in the months after his wife's death from cancer on April 25, 1993. She was a long-time journalist who had served as the book review editor of the Montreal Gazette and, later, as assistant books editor at the Toronto Star. So it only made sense to celebrate her legacy with a literary prize.

Mr. Rabinovitch wasted little time getting the award off the ground, enlisting the help of Mordecai Richler and, soon after, author Alice Munro and University of Ottawa academic David Staines. The trio served as the first-ever jury in the fall of 1994, when the inaugural prize went to M.G. Vassanji for his novel The Book of Secrets.

The Giller Prize has made Mr. Rabinovitch, who was made an officer of the Order of Canada in 2009, a hero to Canada's writers, said Anna Porter, a writer and publisher who founded Key Porter Books and later served as a juror. "Jack's story is a big story. He's done something quite extraordinary. It has not been the easiest time for literary work in this country, but a prize of this size with the kind of prestige attached to it is an incredible boost, not just in Canada but worldwide."

Ms. Giller's death was a harsh blow for Mr. Rabinovitch and many of his friends reflected that he never got over her death. The Giller Prize, with its gift of a rose and glamorous ceremony, was his attempt to pay his respects to his wife and their shared passion for fiction.

"Jack Rabinovitch and Doris Giller were heroes to so many writers," said Michael Ondaatje, who shared the prize with Mr. Richards in 2000 for Anil's Ghost. "I knew her before I met Jack, but both were similar in that they loved books, loved the good times, and there was no bullshit attached to them."

Since its founding, the prize has been won by many of the country's most acclaimed writers, from Rohinton Mistry to Ms. Atwood, Mr. Richler and Ms. Munro, but the prize has also served as a springboard for young and previously unheralded writers, such as Johanna Skibsrud and Sean Michaels. Winners were, for the most part, ensured of a spot on the bestseller lists and it was not uncommon for a publisher to order tens of thousands more copies mere minutes after learning an author had won. So important was the award's impact that it earned its own nickname: the Giller Effect.

The prize quickly became "Canada's pre-eminent literary prize," said Brad Martin, president and CEO of Penguin Random House Canada, in a statement. "Jack has been a great friend to authors and to everyone in the book industry, and he will be greatly missed."

As its profile grew, so did the prize money, from $25,000 to $100,000. But, for Mr. Rabinovitch, the books took priority over the finances; he urged guests at the gala each year to buy all the nominated books, reminding guests they could buy the entire shortlist for the same price as a dinner in Toronto.

The prize is one of the most highly visible cultural awards in the country. It is broadcast on television and the guest list regularly includes not only the nominated writers but business leaders, politicians, actors, musicians and others from the world of Canadian culture. Mr. Rabinovitch's friend, Gerry Sheff, described it as "like his annual bar mitzvah party in many ways."

"He was the host and there would be 400 to 500 people who would come in black tie," he said. "People would make their way over to him and he was very appreciative of the recognition he got, but he never sought it. It came to him because it was deserved and he wore it in a very matter-of-fact way. It's reflective of his entire life."

Mr. Rabinovitch, who was born and raised in Montreal, worked as a reporter and speechwriter, in food retail and other jobs, but made his name in real estate. In his business dealings, Mr. Rabinovitch worked closely with the Bronfman family for years as he delved into real estate projects, first in Montreal and then Toronto. He added millions of square feet of retail to Toronto as that city's skyline leaped upward.

However, his most lasting contribution to the city's real estate came at the end of his business career, as he began his reinvention from businessman to philanthropist. In the late 1980s, he volunteered to help with the rebuilding of the Princess Margaret Hospital on University Avenue. Mr. Rabinovitch helped spearhead the project, which was finished in 1993, on time and under budget.

"That was his introduction to Toronto and I think it was the most amazing thing," said Julian Porter, who met Mr. Rabinovitch at the inaugural Giller Prize. He said what quickly blossomed was an inseparable relationship between unlikely friends. Mr. Porter was the image of the Ontario establishment, a high-powered lawyer who was the son of a former provincial auditor-general. Mr. Rabinovitch was the son of immigrants who graduated from Montreal's Baron Byng High School, a home to the city's poor Jewish community on the hardscrabble St. Urbain Street.

"We were from such different backgrounds, but we became very close. Inseparable friends. We phoned each other every day," Mr. Porter said from his cottage, where Mr. Rabinovitch has been only a few days earlier. Mr. Porter says his friend always remained a Montrealer at heart, devoted to the city's sports and happy to regale his listeners with stories of the old days in the neighbourhoods below Mount Royal.

Laid-back and social, Mr. Rabinovitch's eyes would light up when he played a hand during his frequent poker games with a close-knit group of Toronto lawyers and writers. "He was deceptively good at poker," said Clifford Lax, a close friend who was part of his poker circle. "He learned it from Montreal where he played with Mordecai Richler and all those guys. He was good."

Until the last week of his life Mr. Rabinovitch remained spry. He maintained a rigorous social schedule, often eating out with friends five or more nights a week. "Everyone wanted to have dinner with him, everyone. It was incredible for an 87-year-old," Mr. Porter said. He leaves three daughters – Noni, Daphna and Elana, the executive director of the prize – and three grandchildren, as well as his partner, Judy Clarke, and his sister, Shirley. A funeral is scheduled for Wednesday.

With a report from Miriam Katawazi

For 22 years, the Giller Prize jury has operated as a literary Fight Club
November 4, 2016 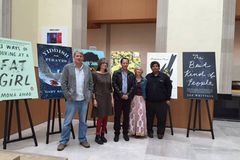 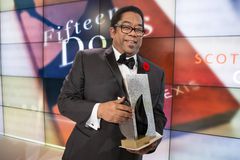 Madeleine Thien’s Do Not Say We Have Nothing wins Giller Prize
November 7, 2016
Follow Justin Giovannetti and Mark Medley on Twitter @justincgio @itsmarkmedley
Report an error Editorial code of conduct
Due to technical reasons, we have temporarily removed commenting from our articles. We hope to have this fixed soon. Thank you for your patience. If you are looking to give feedback on our new site, please send it along to feedback@globeandmail.com. If you want to write a letter to the editor, please forward to letters@globeandmail.com.
Comments