The modest apartment on de Gaspé Avenue stands much the way it did decades ago, tucked among the winding staircases in a French-speaking neighbourhood in Montreal. It's easy to miss the home at 8232, a northern stop in U.S. civil-rights history.

The movie 42 shines Hollywood's spotlight on Jackie Robinson, who endured hatred and bigotry to break the colour barrier in Major League baseball. Left off-screen is his start in Montreal – the city that cheered him, the fans who adored him, and the decency of neighbours on de Gaspé who welcomed him.

Montrealers may not get their cinematic due, but they haven't been forgotten by the woman who experienced their openness first-hand. Rachel Robinson, 90, remembers the city's tolerance during Jackie Robinson's debut with the Montreal Royals in 1946.

"When I hear of bad things that are happening in other places – where people are fighting or being violent and are trying to exclude African-Americans – I think back to the days in Montreal," Mrs. Robinson said. "It was almost blissful."

The couple arrived in the city after Mr. Robinson had been signed to the Montreal Royals, a Brooklyn Dodgers' farm team; he'd been picked by Dodgers general manager Branch Rickey to integrate baseball, a white man's game. Touring with the Royals in the U.S., Mr. Robinson suffered threats during training camp in Florida, racial taunts and blatant discrimination.

"We were bruised when we arrived in Montreal," Mrs. Robinson remembers. "We had been mistreated and subjected to everything that racism can do to a couple."

Hence the newlywed's trepidation as she approached the door on de Gaspé to rent an apartment. She warily walked up the five steps edged by the same wrought-iron bannister that exists today. "One of the most difficult things in the forties for black people was to rent anything, anywhere," Mrs. Robinson recalled.

A French-speaking woman opened the door. Then she offered her the apartment and invited her in for tea. "Instead of slamming the door in my face she said 'Welcome,' in English. I was totally shocked."

So began the Robinsons' introduction to Canada. Neighbours in the Villeray district shared postwar rationing points and sewed maternity clothes for the pregnant Mrs. Robinson. Children rushed to carry her groceries. The francophone family with eight kids who lived upstairs spoke almost no English, but managed to communicate. "We made gestures," Mrs. Robinson said from the Jackie Robinson Foundation in New York.

On the field, Jackie Robinson was a sensation, winning over fans with his spectacular talent and hard work. His teammates, eyewitnesses to prejudice in the segregated South, saw no similar treatment in Montreal.

"Up in the stands, no one dared insult Jackie. He was black, but in their eyes and hearts the fans didn't see that," recalls former pitcher Jean-Pierre Roy, who played with Mr. Robinson.

"I heard obscenities thrown at him in the U.S. In Montreal, he was always respected as a baseball player," Mr. Roy, 92, said from his home in Florida.

Mr. Robinson's triumph culminated in the final game of Little World Series. With chants of "We want Robinson" raining down from the stands, he scored the final run and led the Royals to the championship. Delirious fans hoisted Mr. Robinson on their shoulders and mobbed him when he emerged after the game. The ensuing chase led sports reporter Sam Maltin to famously observe, "It was probably the only day in history that a black man ran from a white mob with love instead of lynching on its mind."

Brian Helgeland, writer-director of 42, has said he focused on Mr. Robinson's breakthrough year with the Dodgers for dramatic purposes. Mrs. Robinson says she had two requests for the film – that it be authentic and inspiring – and says it succeeded on both counts.

Even if it's absent from the movie, Montreal has been recognized by Mr. Robinson himself, who called it "the city that enabled me to go to the major leagues." He once told the CBC, "Had it not been for the fact that we broke in in Montreal, I doubt seriously if we would have made the grade so rapidly." With or without the Hollywood treatment, maybe that's credit enough. 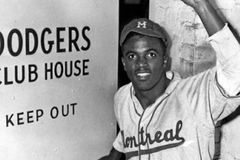 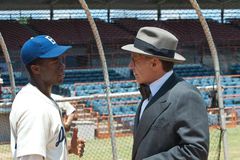