It was minutes after midnight. A new year had just started in Montreal and Robert Côté remembers that church bells were ringing nearby at Notre-Dame Basilica while he was trying to defuse a bomb.

An explosion had gone off outside a federal building. Another detonation had rocked the east side of Montreal's City Hall, shattering windows and a door. On the west side of the building, Mr. Côté was busy with a third bomb, a four-kilo package of dynamite.

It was Jan. 1, 1969, and Quebec was in the sixth year of a campaign of terrorism by the Front de libération du Québec that had already left five people dead and badly maimed an army sergeant.

"From '68 to '69, it was the biggest, most devastating wave of bombs that Montreal had seen. It was very distressing," Mr. Côté, who was then the head of the Montreal police's bomb squad, recalled in an interview.

As the world undergoes another spasm of indiscriminate terrorist violence, a look back at events in 1969 is a reminder of a tumultuous but now overlooked era when society also faced terrorist threats.

While the FLQ is mostly remembered for the 1970 October crisis, the separatist group had started in 1963 by bombing federal symbols such as government buildings and mailboxes.

The FLQ was not a structured, formal organization and various cells and like-minded groups would spring up over the years. The aims also shifted, said Laval University criminologist Stéphane Leman-Langlois, author of a chapter on Canadian terrorism in next year's edition of The Routledge Handbook of Terrorism and Counter-Terrorism.

He noted that the FLQ's discourse, which at first was devoted solely to Quebec independence, eventually adopted Marxist concerns about the working class. It began bombing companies where employees were on strike.

Prof. Leman-Langlois said the FLQ was typical of revolutionary terrorism, its members taking inspiration from Fidel Castro's Cuba or the war in Algeria.

Unfortunately for them, "the population could tell that colonial conditions in Algeria were not comparable to the situation of Quebeckers in Canada," Prof. Leman-Langlois said.

Quebec was undergoing more peaceful changes that would later be known as the Quiet Revolution. There was a separatist party, the Rassemblement pour l'Indépendance Nationale (RIN), but it managed to collect only 4 per cent of the popular vote in the 1966 provincial election.

The FLQ became the route for those convinced that electoral means were doomed to failure.

One of them was a college student named Pierre-Paul Geoffroy. In February, 1968, he took part in a march at the 7 Up plant in Montreal, where workers had been on strike for eight months. The demonstration ended in violent clashes with police and Mr. Geoffroy was among those arrested.

After a lull in 1967, a new wave of bombs struck Montreal in the fall of 1968. Mr. Côté defused a bomb at the Eaton department store just five minutes before it was to go off. "It was probably the closest I came to blowing up," he said.

In the following months, he had to deal with dozens of calls, including the bombs at City Hall, a blast near the home of the police chief and another one that blew up at the Montreal Stock Exchange, injuring 27 people.

The police got a break in March when a tip led to Mr. Geoffroy's apartment, where officers found three bombs and 160 sticks of dynamite.

He quickly admitted his role in 31 bombing incidents, including the City Hall attack and the stock-exchange bomb, but refused to identify other FLQ members. His lawyer argued that Mr. Geoffroy was not a common criminal but an idealist who wanted to "liberate society from the yoke of capitalism."

A month after his arrest, the 25-year-old Mr. Geoffroy pleaded guilty to 129 charges arising from 31 bombings. He received a harsh sentence – 124 concurrent life sentences.

By taking the blame, Mr. Geoffroy allowed other members of his cell to evade justice.

One reappeared with another FLQ member in a Palestinian training camp, giving interviews under the pseudonyms Selim and Salem. Two other cell members hijacked an American plane to Cuba.

The bombs didn't stop however. One night in September, Mr. Côté was woken up by his wife, Pierrette, who said she felt a tremor.

The house of mayor Jean Drapeau, who lived nearby, had been bombed. The blast damaged the floors, toppling the stove and the fridge. But the mayor wasn't home. His wife, Marie-Claire, was unhurt and stood barefoot outside, Mr. Côté remembered.

In the fall of 1970, the FLQ switched tactics and kidnapped a British diplomat and a Quebec cabinet minister. The authorities' response is controversial and well-known: Pierre Trudeau saying "Just watch me." The War Measures Act. More than 400 people detained without charges.

For Mr. Côté, the FLQ's disappearance in the following months is the proof that the authorities' muscular crackdown was justified.

Prof. Leman-Langlois noted that, with the kidnapping and killing of Labour Minister Pierre Laporte, the FLQ lost public sympathy. By the end, the organization had been deeply infiltrated by police informants. It had vanished by 1976, when the Parti Québécois took power, proving that it was possible for a separatist party to win at the ballot box.

Meanwhile, Mr. Côté's bomb-defusing efforts were recognized when he received the Order of Canada in 1972. He was just 36 years old.

Among the mementoes he kept in his office was a Che Guevara poster that had been seized from Mr. Geoffroy's apartment.

Respect and affection tie the Trudeau family, Quebec and Fidel Castro
November 27, 2016
The Shakespearean drama of Quebec sovereignty
May 20, 2016 In 887, Robert Lepage examines his childhood amidst rise of the FLQ
July 9, 2015 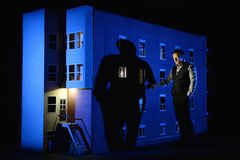