Fifty years ago, people laughed when a sprightly 26-year-old Jane Goodall went to the wilds of Africa to study chimps.

There was no money for what she remembers her doubters calling a "crazy" expedition to learn from the human-like creatures in the Tanzanian parks. But her breakthrough observation that they could make and use tools just like chimps in captivity was an epiphany that would change the way scientists studied hot-blooded animals.

Today, her work helping others to understand chimpanzees has expanded to become something of a social empire. She's honed in on youth, motivating them to make social and environmental change through Roots & Shoots and other programs with the Jane Goodall Institute of Canada and in more than 100 other countries. She's working on yet another book, this one about plants, and a documentary about her called Jane's Journey is scheduled for release in the fall.

As she reflects on her career before an audience at the University of Toronto Friday and advocates for the environment with International Conservation Caucus on Parliament Hill next week, she's casting her view forward to the next 50 years. She spoke with The Globe and Mail in Toronto.

We're here because of that day 50 years ago. What were your expectations when you came upon the shores of Lake Tanganyika?

I didn't have any expectations except that I was jolly well going to get the chimpanzees to accept me and I was going to learn about them. The big problem was every time they saw me, they'd run away. They'd never seen anything like this white ape before, I was peculiar to them.

How did you gain their trust?

I found this famous peak, it's now known as Jane's Peak. And from the peak I could look over two valleys. I realized that sitting up there day after day I could see the chimps moving below. Gradually they got used to me. And then one of them, David Graybeard, lost his fear before the others. He came every day when the fruit was ripe and he found and stole some bananas. After that, when he saw me in the forest, he would sometimes approach. Gradually the others would watch and think, 'Well, she can't be so scary after all.' If David was in the group, I could probably get a little close.

Why did you name the chimps?

Wouldn't you have given them names? I cannot imagine, honestly, anybody giving animals numbers. I wasn't a scientist, I hadn't been to university. I described their personalities as I got to know them. I could see that they were thinking creatures who planned what to do to some extent. I certainly knew they were emotional. And one of my Cambridge professors - because I had to go to Cambridge and get a degree - they'd told me I'd done everything wrong.

What do you think about people teaching chimps how to do very human things like driving. Does that hold any value?

It depends on how it's done. Chimps in the circus are taught to do tricks, they're very clever at it. But showbiz is showbiz and mostly it's being done very harsh punishment if you don't do it right. Same with the intelligence tests in the labs originally all this was done through punishment, rather than do it all through reward. Chimpanzees can do almost anything.

So if it's done by reward, is it valuable?

Not just for its own sake, but we now know that it's very, very wrong to have a chimpanzee as a pet, for example, because they get to be aged and too big and potentially dangerous. Once we have them in zoos, in captivity, one of the worst things they have to contend with is boredom. So the programs that teach them to communicate with sign language or computer, once they are captive and they're not any more in the wild, is good for them.

And what about zoos? Is there a place for them in the future?

Certainly some zoos shouldn't exist. And some animals don't belong in zoos, for example elephants and wolves perhaps most of all, dolphins and orcas. That's wrong. However, a good zoo, which understands that they need the right kind of space, social structure and environmental enrichment, that kind of zoo can educate. Most kids don't get the chance to see a giraffe in Africa. If they see them where they can walk and they have some parklands and they can put out that long neck and they can see the black tongue curling out around the leaves, that child won't forget that.

Your work has taught us not only about animals but about human interactions. What has it taught you personally?

I think the most important lesson I've learned personally is the importance of early experience for our children. It's very clear with the chimps that if you have a good mother, she's protective but not too protective. She's affectionate, playful and perhaps most important of all, supportive of the child if it gets into trouble. Then that child is likely to thrive into an individual who plays an important role in his or her community.

Do you think your work is reconnecting us with nature and the more ancient indigenous ways of viewing animals as our peers?

Yes, well, with our youth program. We are part of the animal kingdom, we're not separate from it. And that gives you a new way of thinking, new respect not just for chimps, but the other amazing animals with whom we share the planet.

Why is youth your main focus now?

It's the very main focus because I could kill myself trying to save chimps. In a way I am killing myself trying to save chimps. They are in a terrible state in the wild, the numbers are just plummeting and we're doing everything we can through the Jane Goodall institute. But for all of us, it's useless unless new generations become better stewards than we've been. And young people are not going to become good stewards if they don't have hope that their actions are going to make a difference. There's so much lack of hope.

What are the major challenges sustaining the future for chimps and the rest of the world?

One is the sheer number of people on the planet and the growing number. The second one is that way over half of those people are living in poverty, and when you're living in poverty you are not able to be a good steward of the environment. Then there's the unsustainable lifestyle of everybody else, like you and me. The youth get it, they understand. And the great thing is the main message of our program is that every one of us makes a difference every day. 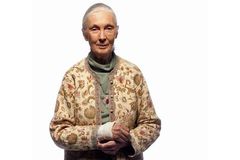