Japan is eager to talk to Canada about moving forward on some important trade, energy and security projects, so it hopes Justin Trudeau will attend next month's G20 and APEC summits.

Kenjiro Monji, Japan's ambassador to Canada, said the two summits would provide a good chance for Trudeau to meet Prime Minister Shinzo Abe for a face-to-face sidelines conversation. The G20 and the Asia-Pacific Economic Co-operation summits are talking place in Turkey and the Philippines the same week, starting Nov. 16.

Japan is especially keen to move forward on the Trans-Pacific Partnership — the massive 12-country Pacific Rim trade deal that covers 40 per cent of the global economy, Monji said in an interview Wednesday.

So far, Trudeau has committed to attending only one of the four major international gatherings taking place in the coming weeks — the Paris climate change summit in early December.

"It is important that our leaders meet as soon as possible," Monji said.

A White House statement on Monday's telephone call between Trudeau and U.S. President Barck Obama said they discussed "the need to move forward with implementing the high standards" of the TPP.

"I was encouraged to see ... in the telephone conversation between Mr. Trudeau and President Obama they agreed in principle on the importance of the TPP," said Monji.

"I understand that Liberals are traditionally free trade people. So I hope that the new government will approve the TPP."

Abe also wants to bend Trudeau's ear on some non-TPP matters, including starting a steady long-term supply of liquefied natural gas from British Columbia's coast to his country, as well as some potential military co-operation.

"Canada is a potential LNG exporter to Japan and a very good one because Canada is a very stable country, politically and economically. And also there's no choke point during the transportation from Canada to Japan."

Qatar is currently Japan's No. 1 supplier of LNG, but tankers from the Gulf state must pass through the Strait of Hormuz, which borders Iran, and the Strait of Malacca, between Indonesia and Malaysia, which has been beset by piracy.

Monji realizes the long election campaign has stalled the federal review of the $36-billion Pacific NorthWest LNG project, which the British Columbia Liberals are keen to establish as a natural gas export hub to Asia.

But as others in the LNG industry have warned, Monji said Canada's window of opportunity to cash in on the Asian market could soon close because of competition from other countries, including the United States.

"Timing is crucial because many other countries are trying to develop or sell liquefied natural gas to other parts of the world, especially to Asia, whose economy is growing. This involves a huge investment. So once it is agreed, it will last for a long time," said Monji.

Monji pointed to the 25-year contract that Japan has signed with Qatar.

"It means, once implemented, it will be a long-lasting project. That means if you lose the chance to other countries, the next chance will not come so easily."

Monji said Japan also wants to discuss the possibility of more military co-operation with Canada, including on peacekeeping missions.

Trudeau said during the campaign that he wants to return Canada to its peacekeeping roots.

Trudeau said this week is he "very hopeful" he will attend the G20 and APEC summits, but his first priority is getting a government up and running. Trudeau said he plans to pick a cabinet and be sworn in on Nov. 4, and would like to recall Parliament as quickly as possible.

Trudeau faces a full international calendar in the coming weeks. In addition to the leaders' summits of the G20 and APEC, there is a late November meeting of Commonwealth leaders in Malta. 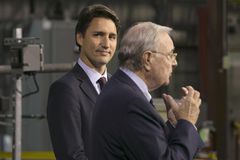 Politics Notebook: Justin Trudeau makes his first moves
June 19, 2017
Report an error
Due to technical reasons, we have temporarily removed commenting from our articles. We hope to have this fixed soon. Thank you for your patience. If you are looking to give feedback on our new site, please send it along to feedback@globeandmail.com. If you want to write a letter to the editor, please forward to letters@globeandmail.com.
Comments