One of Prince Edward Island's best-known broadcasters and journalists, Jack MacAndrew had a life that read like an adventure tale. He went from serving as a Royal Canadian Air Force flying officer to a career as a CBC reporter and producer and later on to working as political adviser to two premiers. As a result, Mr. MacAndrew's wife, Barbara, said she felt like she was married to 19 different men.

"He just had an incredible curiosity," Ms. MacAndrew said. "He wanted to do everything."

As a young, Halifax-based CBC reporter in the 1950s, Mr. MacAndrew reported live from the town of Springhill, N.S., when it was devastated by two of the worst mining disasters in Canadian history. For the first time, he and the CBC broadcasted live internationally from the pithead. In 1956, his reports let the world know that an explosion had killed 39 miners, and in 1958, that another 74 miners had died in what became known as the "bump."

Mr. MacAndrew waited anxiously for days at the pithead in 1958 to learn if any of the miners trapped deep below the surface were still alive. Six days into the rescue effort, he was there to witness a miracle: 12 trapped miners were found alive.

"The world hung on whether or not these men would be found," Mr. MacAndrew, told Halifax's The Coast newspaper. "It was the first occasion when a disaster became a global event."

When the surviving miners eventually emerged from the darkness, Mr. MacAndrew was among the first to interview them. The kindness of one coal miner named Herb Pepperdine moved him profoundly. Mr. Pepperdine had found a chocolate bar while trapped underground in total darkness. Despite being hungry, the miner told how he had carefully split the candy bar to share with the seven men in his group of survivors. "To me that is one of the most remarkable stories," Mr. MacAndrew told Dick Gordon in 2010 on the American public radio show The Story, his voice filled with emotion. "That is a strength that just creates a remarkable sense of humility."

Countless times Mr. MacAndrew said he asked himself, "Would I have had the guts to do the same?"

For his reporting on the disasters, he earned the nickname Jack (Pithead) MacAndrew. He later received a plaque from the mayor of the town of Springhill, N.S., declaring him an honorary citizen. He hung it on the wall in his home office in Meadowbank, PEI. In 2008, for the 50th anniversary of "the bump," he helped organize a commemoration. "I always felt that I owed them," he said of the miners.

Born in 1933 in Campbellton, N.B., Mr. MacAndrew was the eldest son of Lieutenant-Commander John MacAndrew and Rhoda MacAndrew. In 1945, the family moved to PEI, a place Mr. MacAndrew considered his "heart's true home."

After attending the Prince of Wales College, he joined the Royal Canadian Air Force in 1954 at the age of 18 as a flight cadet and became a radio officer on Lancaster planes. Two years later, he was hired as a publicity assistant at CBC in Halifax. It was there that he met a young woman named Barbara Myfanwy Tuck, whose job it was to write audience reports. "The sparks flew," she recalled. A few weeks later he proposed and on Sept. 28, 1957, the couple married.

Mr. MacAndrew left publicity and reporting and went onto write, produce and host several Canadian TV shows, including the This is Jazz series out of Halifax. In 1965, he left the CBC to return to PEI as public relations and marketing director and later producer of the Charlottetown Festival's musicals Anne of Green Gables – The Musical, Johnny Belinda, Mary, Queen of Scots and Kronborg: 1582, among others.

With his thick beard, imposing eyebrows and shaggy sweaters, Mr. MacAndrew resembled, as he once said, "an unmade bed or a scrofulous black bear." Actress Gracie Finley, who played Anne starting in the late 1960s, wasn't scared off by his gruff exterior.

"He started calling me Ms. Gables and I used to call him Uncle Jack," Ms. Finley said. "He looked after me. He was very much a father figure to me."

When Ms. Finley found out she was pregnant with her first child in the middle of the festival's season, she had to break the news to Mr. MacAndrew. Instead of being worried about the possibility of a pregnant Anne, he hugged her. "He clucked over me like a mother hen," she said.

Known as a persistent man, he went after what he wanted until he got it. Singer Catherine McKinnon remembers Mr. MacAndrew calling her repeatedly in the mid-1960s until she finally agreed to go to his beloved island to sing. "I saw that island and I almost died," she said. "I fell in love with PEI. That was a gift he gave to me," she said. She later opened a restaurant in Stanley Bridge, PEI.

In 1968, Mr. MacAndrew jumped into the political arena when he ran as a Liberal candidate for Pierre Trudeau in the PEI riding of Hillsborough. He narrowly lost to incumbent Heath MacQuarrie. The experience sparked a life-long interest in politics and he later worked on the campaigns of premiers Alex Campbell and Joe Ghiz.

"To know MacAndrew was to love him," Mr. Campbell said at his funeral. "He could be gruff, argumentative, irascible and demanding … but you always knew that he was an honourable man – kind to his very core and loyal beyond words."

Whatever Mr. MacAndrew did, whether it was in his professional or personal life, he did it full out, Mr. Campbell said. He recalled a Christmas in the late 1960s when Mr. MacAndrew received a blender from his wife for Christmas. That year, the MacAndrew family had a puréed Christmas dinner and at their New Year's party everybody drank frozen strawberry daiquiris.

In the mid-1970s, Mr. MacAndrew, his wife and their two sons moved to Toronto, where he had accepted a job as head of variety programming at CBC. Over the next decade he helped launch the careers of many Canadian artists. His flagship series of hour-long "Superspecials" starred Canadian musicians and entertainers such as Anne Murray, Bruce Cockburn, Maureen Forrester, Oscar Peterson, Gordon Lightfoot, Howie Mandel and Jim Carrey. Mr. MacAndrew's idea was to create variety programs that starred Canadian performers who invited international stars as their guests.

Ms. McKinnon remembers performing on one of the CBC Superspecials with Roger Whittaker. For four days, they travelled and filmed on the Bluenose II before arriving in Halifax Harbour, where they were met by visiting tall ships.

In 1980, he left CBC-TV to establish his company, Jack MacAndrew Productions. In 1985, he and his family moved back to PEI and for the next 20 years, he created provincial and national TV productions.

Back in PEI, he was also a TV political commentator and phone-in show host on CBC radio and had a column with the Eastern Graphic newspaper for 27 years, in which he would voice his opinions on any political topic.

Mr. MacAndrew loved the beauty and tranquillity of Meadowbank, just outside Charlottetown. Living in an 1860s house facing the West River, he called it his own Shangri-La. There he had dogs, cats and a barn full of exotic chickens named after famous people he had met, such as Oscar Peterson and Maureen Forrester.

In the winter, he loved to dress up as Santa Claus at a mall in Charlottetown and also play the role for kids with Down syndrome.

"That's part of being a Maritimer," he said in an essay on CBC Radio in 1986. "You only ever have one home, all the rest is transient existence. You seem to live at the centre of most everything on the island. Everything touches you."

Mr. MacAndrew died on May 23 at the Queen Elizabeth Hospital in Charlottetown at the age of 81. His cancer had spread from his kidneys into his back and bones. He leaves his wife, Barbara; sons, Shaun and Randy; five grandchildren; six great grandchildren; brother, William; and sisters, Anne and Heather.Special to The Globe and Mail 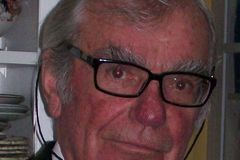