The Ontario woman who became an international animal-rights star after she faced potential jail-time for giving water to slaughter-bound pigs has been acquitted.

Ms. Krajnc was charged in September 2015, after ignoring a truck driver's request not to feed a truck loaded with 190 pigs, moments away from a Burlington abattoir. Video of the incident posted to YouTube shows the pair exchanging heated words, in what has become a symbol of the escalating tensions between the animal-rights movement and the meat industry.

Opinion: Pigs are still property – but animal farming is a serious matter for ethical consideration

Ultimately, Justice Harris said he was not convinced that a crime had even occurred.

Throughout the five days of hearings, Crown attorney Harutyun Apel argued that Ms. Krajnc had interfered "with the operation, enjoyment or use of" the pigs by its owners. But Justice Harris found that simply giving the pigs water did not constitute such "interference."

According to the Crown, by giving the animals an "unknown substance/possible contaminant," Ms. Krajnc and other activists pose a potential safety risk in an otherwise strictly-regulated system. That concern has been echoed by farmers, some of whom attended the packed courthouse in person on Thursday. "We can't just have a food system where people can interfere with food in any step of the process," said Clarence Nywening, Christian Farmers Federation of Ontario president, outside the courthouse.

But in Ms. Krajnc's case, Justice Harris dismissed that argument.

After the altercation between Ms. Krajnc and the driver, he still delivered the animals to the abattoir without alerting them to a possible contamination. This showed that the driver did not believe there was a real threat, Justice Harris said.

After the decision, Ms. Krajnc and her dozens of gathered supporters, many wearing "Pig Save" T-shirts and carrying "Go Vegan" signs, were quick to claim victory. "Compassion should never be illegal," she told a large gathering of reporters. "The Golden Rule applies to all animals, including giving water to a thirsty, panting pig on her way to slaughter." She vowed to continue doing so.

Still, Justice Harris was clear that his verdict stopped short of condoning all of the defence's arguments.

Over the course of the trial, Ms. Krajnc's lawyers, James Silver (a well-known animal-rights lawyer) and Gary Grill, used the appearances to highlight what they perceive as cruelties in the meat industry. One after another, they called witnesses to testify on environmental effects, health concerns and animal-welfare implications associated with eating meat. More than once, Ms. Krajnc acknowledged that her aim is to convert people to a vegan lifestyle.

But in his decision, Justice Harris dismissed the testimony of at least two of these experts for lacking objectivity – and, in one case, for being "less than scientific."

One of the defence's main arguments – that pigs should be considered by law "persons" and not "property" – was dismissed outright by Justice Harris.

"In fact, by law in Canada, pigs are not persons and they are property," he said in his decision. "Ms. Krajnc and like-minded individuals may believe otherwise and they are fully entitled to that belief. That does not, however, make it so."

He added: "In passing, I note that dogs and cats and other pets are property, too. And not persons."

The judge also took issue with Ms. Krajnc's and her lawyers' rhetoric, which often bordered on sensational. More than once during the trial, the defence compared Ms. Kranjc with Mahatma Gandhi, Nelson Mandela and Susan B. Anthony.

Such statements, the judge said, "appeared not to be directed at him but rather [grabbing] the public attention as a controversial sound-bite, thereby allowing her to get her message out through the media that pick up those sound-bites." He also chastised Mr. Grill for his comments comparing Ms. Krajnc to those who aided Jews in Hitler's Germany. "I found the comparison to be offensive and I will be attaching no weight to it in my decision."

Still, he acknowledged the comment likely had its desired outcome. "I would not be surprised however if it received media coverage."

Many outside the courthouse afterward were left wondering how an otherwise unremarkable argument outside a Burlington abattoir had somehow blown up into a worldwide media spectacle.

When asked by a reporter on whether the case should have ended up in court, Mr. Grill shrugged. "Yes, I agree with you," he said. "A lot of taxpayer money was wasted." 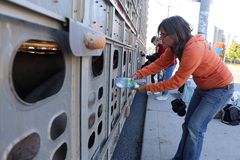 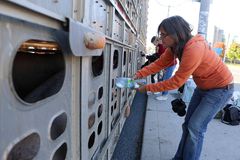