The judge deciding a case against two Ontario Liberals facing bribery charges under the Election Act questioned the merits of one of the charges against a former top staffer to the premier Tuesday.

Lawyers for Pat Sorbara, who was Premier Kathleen Wynne's deputy chief of staff and Liberal campaign director, and local Liberal fundraiser Gerry Lougheed argued in court for the case to be tossed.

Their directed verdict application calls on the judge to dismiss the charges before the defence has even called any witnesses, arguing the Crown hasn't proven its case. The judge is set to deliver his decision on Oct. 24.

Sorbara and Lougheed, who have pleaded not guilty, are accused of offering would-be candidate Andrew Olivier a job or appointment to step aside for Wynne's preferred candidate in a 2015 by-election in Sudbury, Ont. That preferred candidate was Glenn Thibeault, then the NDP MP, and now the energy minister.

Sorbara also faces a second charge, alleging that she bribed Thibeault to become the candidate by arranging for paid jobs on the by-election campaign for two of his constituency staff.

Her lawyer argued the charge appears to rely solely on Thibeault asking Sorbara if paid campaign jobs were a possibility, while he was considering whether to run for the Liberals, and Sorbara replying that it was "doable."

"We are having difficulty understanding why we're here," Brian Greenspan said.

Judge Howard Borenstein said Tuesday he was having a hard time seeing that as an offence.

"It seems to me that if something like this would be considered corruption or bribery, it's extending these terms beyond what they seem reasonably capable of bearing," Borenstein said later.

A factual response to a potential candidate is not an inducement and Sorbara made no promise to provide paid positions for Thibeault's staff until after he decided to become the candidate, Greenspan said in his written submissions.

"To put it bluntly, the idea that Ms. Sorbara induced Mr. Thibeault to leave his role as a federal MP by promising modest one-time stipends for two staffers, totalling less than $5,000, is fanciful," he wrote.

The charges faced by both Sorbara and Lougheed in relation to Olivier come down to the definition of a candidate under the law, Lougheed's lawyer Michael Lacy argued.

It is contrary to the Election Act to offer a job "to induce a person to become a candidate, refrain from becoming a candidate or withdraw his or her candidacy" but it was a legal impossibility for Olivier to become the Liberal candidate, since the premier had already decided Thibeault would be appointed, Lacy said.

The definition of a candidate in the Election Act suggests someone isn't a candidate under that law until an election writ has been issued, and Lacy noted that Sorbara and Lougheed spoke to Olivier roughly a month before the by-election was called.

Lacy argued the Crown is trying to broaden that definition and if the judge rules in their favour, it would drastically change how political parties operate.

"The Crown may not like the fact that internal party politics involve what some might describe (as) wheeling and dealing for the betterment of the party, but that's not an offence in my submission," Lacy said.

Lougheed, in a recorded conversation, told Olivier he was there on behalf of the premier to ask him to consider stepping aside for Thibeault and "in the course of that deliberation" he should consider "options in terms of appointments, jobs, whatever."

Sorbara told Olivier they should have a broad discussion about what he would be interested in, be it a constituency office job, appointments to boards or commissions or a position on the party executive.

The Crown argued that Olivier could still have become the candidate if Thibeault refused or changed his mind, and that Sorbara was trying to identify what would really induce Thibeault to run. 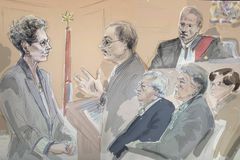 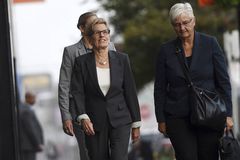 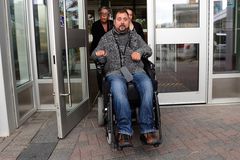