It began with a simple court application from a Toronto defence lawyer who wanted to ditch a client he had come to loathe.

Two years later, a bizarre series of events ensuing from that request has ended in another admonishment for an Ontario Court jurist, Judge John Ritchie, who has repeatedly run afoul of appellate judges for his mishandling of cases.

"It is unfortunate," Judge McWatt remarked, noting that the proceeding had veered "far afield" from the way it ought to have played out.

The parade of legal oddities began on Oct. 7, 2010, when Mr. Slansky made his motion over the protestations of Mr. Goodridge, who faced a trial for threatening bodily harm.

"It is impossible, in my view, to represent his interests when I despise him," Mr. Slansky told Judge Ritchie. "I'll repeat that because Mr. Goodridge apparently didn't hear me. I despise him."

In his 24 years as a lawyer, Mr. Slansky said that had never sought to drop a client until Mr. Goodridge came along.

"Even if I do my best to maintain my professional obligations to represent him professionally and vigorously, I know that subconsciously, I cannot do so because I want him to go down, so to speak," he said.

But Judge Ritchie turned Mr. Slansky's motion down flat, out of concern that Mr. Goodridge might not be able to find another lawyer to replace Mr. Slansky. "The trial is going to proceed," Judge Ritchie announced. "Madam Crown, put your first witness on the stand."

Flabbergasted, Mr. Slansky refused to participate. He accused Judge Ritchie of prejudging his application and creating "a travesty of justice."

Mr. Slansky appealed Judge Ritchie's decision to Ontario Superior Court, arguing in a legal brief that the hearing before Judge Ritchie had degenerated into "a circus atmosphere." He alleged that Judge Ritchie had been biased, dishonest and ought not be allowed to preside over the case.

Mr. Slansky also reiterated his disgust for his client. "The applicant does not care what happens to Goodridge," he said. "In fact, it would give the Applicant some personal satisfaction if Goodridge was found guilty and went to jail."

Then, the session turned stormy. Mr. Goodridge accused Mr. Slansky of, "very, extremely-gross professional misconduct." He also went after Judge Ducharme. "You have demonstrated despicable, unethical, insulting, rude behaviour," Mr. Goodridge said. "I think you have exhibited a biased grudge against me."

Judge McWatt cited judicial immunity in rejecting his motion. However, she expressed sympathy for the legal hoops Mr. Slansky had been compelled to jump through.

"Mr. Slansky was forced to bring this application to the Superior Court on a straightforward issue which should have been resolved before Judge Ritchie," she said. "Although this matter could have become less inflamed by Mr. Slansky and he should have considered more carefully his claim for costs, I do recognize his frustration over what occurred in Provincial Court."

In an e-mail response to an interview request Monday, Judge Ritchie said that judges cannot comment on individual cases. He said they can only do their best to decide cases in a just manner based on the evidence before them and the law.

"After our function is complete, it becomes the responsibility of appellate judges to review decisions that are brought before them," Judge Ritchie wrote.

"Often the trial decision is upheld, and sometimes the appellate judge will conclude that there were one or more legal errors made at trial," he added. "That is the way our system of justice works, and that is the way it should work."

Appellate judges who reverse Judge Ritchie's decisions tend to fault him either for giving short shrift to the defence or for issuing unacceptably sketchy reasons. In mid-February, he was taken to task for convicting a mentally ill man after the Crown backed off the case.

In 2003, Superior Court Judge Anne Molloy examined several of his decisions and said in a ruling he provided identical, "boilerplate" comments instead of indicating his reasons for finding some witnesses not believable. 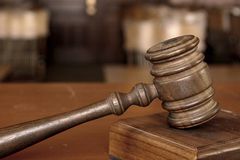 Judge speaks out against court delays
July 16, 2003
Follow us on Twitter @globeandmail Opens in a new window
Report an error Editorial code of conduct
Due to technical reasons, we have temporarily removed commenting from our articles. We hope to have this fixed soon. Thank you for your patience. If you are looking to give feedback on our new site, please send it along to feedback@globeandmail.com. If you want to write a letter to the editor, please forward to letters@globeandmail.com.
Comments