A depressed and suicidal mother was convicted of manslaughter Friday for drowning her two young sons in the family bathtub after a judge ruled a "black hole" swallowed the Crown's attempt to prove that she knew what she was doing.

Allyson McConnell had been charged with second-degree murder in the deaths of 10-month-old Jayden and two-year-old Connor sometime between the evening of Friday, Jan. 29, 2010, and the following Monday morning.

"Due to the black hole in the evidence, the Crown is left not knowing what happened in the McConnell home during those final few days of the McConnell's children's lives, including what Allyson's mental state was when she drowned them," Justice Michelle Crighton wrote in her decision.

"It is left with a reasonable doubt that she had the specific intent to kill her children."

Court heard no direct evidence about what happened during those few dozen hours. Mrs. McConnell testified that she has no memory of them.

The Crown argued she killed the boys as revenge against her husband with whom she was undergoing a bitter divorce. But defence lawyer Peter Royal argued that Mrs. McConnell's mind was so clouded by booze, sleeping pills and severe depression that she couldn't have formed the intent required to convict her of murder.

Members of both Mrs. McConnell's family from Australia and that of her former husband were present for the verdict. Court was quiet as it was delivered as observers wiped away silent tears.

Mrs. McConnell, 33, remained hunched over, stared fixedly ahead and showed no reaction – just as she had during testimony.

"It is hard to envisage a sadder set of circumstances than those involved in this case," wrote Judge Crighton. "These events have affected everyone who came in contact with the McConnell family, but none so profoundly as the McConnell and Meager families themselves, who carry with them every day the enormity of their loss."

Outside the courtroom, Crown lawyer Gordon Hatch said he felt the Crown had proved murder, so "I'm disappointed in that regard."

"But a verdict of murder would not have been any more satisfying in the sense that these boys are dead and we can't do anything about that."

Mr. Hatch said he believed the McConnell family was disappointed by the verdict.

"I don't know if their thoughts have turned to closure, but I hope they will find that."

Mrs. McConnell's sentencing hearing is scheduled for May 9. She remains in custody in Alberta Hospital Edmonton.

Court was told Mrs. McConnell had a long history of suicide attempts that began after her father got her pregnant when she was 15 and still living in Australia.

Officers also found a rope tied to a joist in the basement. A chair was sitting underneath.

Mrs. McConnell testified that she had trouble getting one of the boys to go to sleep that Friday night and didn't get him to nod off until about 11 p.m. She said she then sat down on her couch and began drinking and taking sleep medication, overwhelmed by her depression and stress from the divorce.

After that, her memory is almost non-existent. She remembers waking up in a bathtub, along with submerged and plugged-in electrical appliances, but little else.

Psychiatrist Alberta Choy, who has been treating Mrs. McConnell, testified that her patient was suicidal and that her identification with her children was so complete that she may have seen killing them as an extension of her own death.

On the morning of Feb. 1, 2010, Mrs. McConnell drove to Edmonton, parked at a toy store, ordered lunch and then tried to kill herself by jumping off a bridge onto a busy freeway.

The trial was told it was her estranged husband, Curtis McConnell, who pulled the lifeless bodies of his little boys from a tub of cold water.

He testified he frantically ran to get a neighbour to come and look in the bathroom, just in case he had imagined the whole thing.

His wife had left her wedding ring sitting on top of the toilet seat.

He said their divorce had been bitter and they had fought over custody of the boys, whom Mr. McConnell wanted to take back to Australia with her.

Mr. McConnell has filed a lawsuit against his wife requesting damages for the children's deaths. 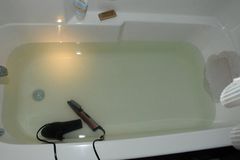 Alta. father didn't know drowned boys were with mother
May 2, 2018
Follow us on Twitter @globeandmail Opens in a new window
Report an error
Due to technical reasons, we have temporarily removed commenting from our articles. We hope to have this fixed soon. Thank you for your patience. If you are looking to give feedback on our new site, please send it along to feedback@globeandmail.com. If you want to write a letter to the editor, please forward to letters@globeandmail.com.
Comments are closed