He was one of the first judges to rebel. When the Conservative government of Stephen Harper made a "victim surcharge" mandatory three years ago for all convicted criminals, Ontario Court Justice Colin Westman refused to demand payment from the poor. The charge was $100 for each summary offence, and $200 for the more serious indictable ones. "A tax on broken souls," he called it, and imposed minuscule $1 fines, and a 30-cent victim surcharge.

The rebels have won. This fall, the Liberals introduced legislation to give judges back the authority to exempt impoverished offenders from the surcharge. And Justice Minister Jody Wilson-Raybould, in a speech last month explaining why she was proud to have done so, quoted Justice Westman's stinging description of the mandatory charge.

Justice Westman, reflecting on this rare episode in Canadian history at his favourite lunchtime spot near the courthouse in downtown Kitchener – Exclamation Restaurant – said he never even considered whether his response was legally justifiable.

"I can be honest and say I didn't ponder the legal implications of it. I react emotionally to things, and it was just morally wrong." He said he assumed that if he was wrong in law, a higher court would correct him.

Legislators make laws, and judges apply them. They can strike laws down that run afoul of the Constitution. But what made the episode so unusual is that scores of judges – Justice Westman was not alone – evaded the law as written. Some refused to order the surcharge, others gave 10, 25, even 99 years to pay, and an Ottawa judge even ruled the surcharge unconstitutional without asking the prosecution for its view. (A higher court threw that ruling out.)

"I don't think judges can go off on a frolic of their own," Robert Armstrong, a retired Ontario appeal court judge, said in an interview. "If a judge finds a law that he or she thinks is unjust or unfair, and decides that he or she isn't going to apply it, ultimately, you end up with judges doing what makes them feel good." There are exceptions – judges improperly did the bidding of apartheid regimes in South Africa and the Nazis in Germany – but "this is not one of those situations."

"The surtax was a tax to help broken souls, quite frankly," said Conservative justice critic Rob Nicholson, who was justice minister when the mandatory surcharge was introduced in Parliament. "I go back to the basics: that we all have a role to play. The role of judges is to apply the law. Our role as Parliamentarians is to make the law."

Others, such as Gerald Seniuk, a retired chief judge of the Saskatchewan Provincial Court, see more room in the judicial tradition of independence to confront government action they oppose.

"What happens when a trial judge cannot find a remedy either in the letter of the law or in the constitutional framework guiding the law – must a judge then remain inert?" he said in an e-mail. "Sometimes, the only reason a judge can then give is that in the face of such an injustice, he or she must be presumed to have some inherent jurisdiction to follow an informed judicial conscience and to provide relief."

The Conservatives said too many judges were waiving the surcharge; they doubled the existing charge and made it obligatory in the fall of 2013. Soon after, an unemployed teenage robber came before Justice Westman, who made a stunning declaration in open court: "It's embarrassing to be part of a system that can impose those kinds of laws."

He admits he was legally wrong to have denounced the government in his courtroom. But added: "I would say it again. Every once in a while, you have to stand up in life and make a statement on behalf of others that can cause a bit of a tempest." No one from the administration of justice took him to task, he said – not even when he spoke to The Globe and Mail and went on television to explain his views. And no one complained to the Ontario Judicial Council about him.

Justice Westman, a married father of two who, at 73, is a year and a half from mandatory retirement, speaks of one "broken soul:" a homeless man in his early 20s, suffering from anxiety and depression, who pleaded guilty in his court to a minor crime — Justice Westman cannot remember what, perhaps a small theft — and who described a life looking for his next meal and place to bed down, on the move constantly between Kitchener, London and Niagara Falls because he did not get along with other street people.

"I try to give them words of encouragement. I say, 'I'm here not because of what I did but because of what I was given. … so much of life is a gift: who you're born to, in what country. That's the reason we owe them something, because we were not all made equal in terms of being able to function in society."

The mandatory surcharge law allowed judges to set a fine instead of the $100 or $200 charge, with an automatic victim surcharge of 30 per cent of the fine. Hence Justice Westman's solution: a $1 fine, and 30-cent surcharge. What his heart told him to do, Quebec Court Justice Patrick Healy, a former McGill law professor, did with his head: a 10,000-word ruling in R v. Cloud in February, 2014, in which he concluded that a $5 fine and $1.50 victim surcharge was the appropriate, just and lawful approach. But then the Quebec Court of Appeal overturned his ruling, saying that "neutralizing the surcharge" was not a valid objective.

This fall, Ms. Wilson-Raybould promoted that same Justice Healy to the Court of Appeal – Quebec's highest court – and restored judges' discretion over the surcharge. In the clash between government and judges, chalk one up for the rebels.

New legislation will empower judges to waive victim surcharge
May 17, 2018 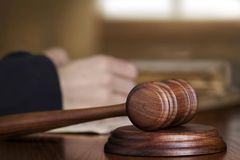 Rare insight into the thoughts of Trudeau’s first Supreme Court pick
June 19, 2017
Wilson-Raybould vows to appoint judges ‘in near future’ after criticism
April 6, 2017
Follow Sean Fine on Twitter @seanfineglobe
Report an error Editorial code of conduct
Due to technical reasons, we have temporarily removed commenting from our articles. We hope to have this fixed soon. Thank you for your patience. If you are looking to give feedback on our new site, please send it along to feedback@globeandmail.com. If you want to write a letter to the editor, please forward to letters@globeandmail.com.
Comments