Some Ontario judges are ordering impoverished offenders to pay as little as 30 cents to a victims' fund, despite a higher court's ruling that a mandatory penalty of $100 for minor crimes, and $200 for serious crimes, is constitutional.

The unusual discord between judges represents the deepening of a judicial rebellion against the Conservative government over a financial penalty used to raise money for victim services. The government made an existing "victim surcharge" mandatory for all convicted offenders, and doubled it, in the fall of 2013. The Conservatives say they are rebalancing the justice system, giving power to victims and taking power from criminals.

Almost immediately, judges in several provinces took to evading the law in various ways rather than impose the penalty on impoverished offenders; some are still doing so. But in Ontario, a lower court is now at odds with a higher court. Judges are duty-bound to follow the precedents set by higher-court judges.

Last month, Justice Bruce Glass of the Ontario Superior Court in Cobourg, Ont., ruled that the mandatory victim surcharge is "a far cry from being grossly disproportionate," since the prosecution said it would give the four offenders in the case, who included a blind, mentally ill, alcoholic woman living on $831 a month, two years to pay; $300 in charges amounts to $2.88 a week over two years, he noted.

But judges on lower courts are refusing to order the surcharge. This month, Provincial Court Justice Colin Westman, who sits in Kitchener, Ont., convicted an offender of four minor crimes, and fined him $1 per count, resulting in a surcharge of 30 cents on each one. The law allows judges to order a fine instead of the $100 or $200 penalty; the victim surcharge then becomes 30 per cent of the fine.

In an interview this month, Justice Westman said he was not trying to show disrespect to anyone in ordering such a small fine. Instead, he cited a comment from an Ontario prosecutor reported in a case known as R v. Michael last year that judges have the right to order nominal fines, if they think the $100 or $200 surcharge would be disproportionate.

"Initially I thought it was a way of dissing the system, but I feel comfortable now in certain circumstances," Justice Westman said.

Last year, speaking to The Globe and Mail, he described the surcharge as a "tax on broken souls." On Friday, he was touched when the man he fined $1 promised to pay.

"This fellow said to me, 'Okay, sir, I will do my best to pay it.' You bring it down to a level that is not inconsistent with their reality – it was just interesting, his reaction." He said he could not remember what the man was convicted of, but often he sees "breaches of probation and breaches of recognizance, failure to appear for identification. A lot of this stuff doesn't have victims. The only victims are themselves."

Two other Ontario Court judges, who asked not to be identified, said in interviews that they, too, are giving nominal fines. "Hell, if Parliament had wanted to remove our discretion entirely, they would have taken away the 30-per-cent" rule, one judge said. "Sentencing is supposed to be individual," another said.

University of Ottawa law professor Carissima Mathen said in an e-mail that these judges's use of the nominal fines "doesn't count as outright disobedience. Maybe chutzpah."

Another sign of the unusual discord between levels of court can be found in a ruling by Justice David Paciocco of the Ontario Court of Justice in Ottawa. A former law professor at the University of Ottawa, and author of several books on criminal law, he had ruled the victim surcharge to be cruel and unusual punishment, and therefore unconstitutional, in R v. Michael. (Shaun Michael was a homeless Inuit man living on $250 a month, and facing $900 in surcharges for resisting a police officer's attempt to apprehend him when he was grossly intoxicated.)

"They are often aboriginal offenders who have often accumulated numerous convictions for minor offences, and quickly accumulate victim surcharges in the thousands of dollars," Justice Paciocco said.

Justice Westman expressed great admiration for Justice Paciocco and his ruling in the Michael case. "He's just a scholar, a principled individual. You can be proud of the justice system when you see those kinds of judgments." Of Justice Glass's ruling, he said, "I'm disappointed but he did what he thought was right. He did it the way he did it and I'll leave it at that. "

Ontario prosecutors had appealed Justice Paciocco's ruling in the Michael case, but dropped their appeal as soon as Justice Glass made his ruling. Toronto lawyer Daniel Santoro is now asking the Ontario Court of Appeal to hear an appeal of Justice Glass's ruling in the Tinker case. And several judges at a conference in Niagara-on-the-Lake last week said they will continue giving nominal fines until the appeal court rules on the Tinker case.

Justice Minister Peter MacKay said in an e-mail that the government remains "committed to ensuring criminals are held fully accountable for their actions and that the safety and security of law-abiding Canadians and victims come first in Canada's justice system." 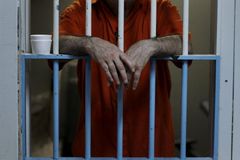