A Supreme Court of Canada judge has used a commencement speech in the United States to publicly denounce "narcissistic populism."

Speaking to graduates at a Boston-area university on Sunday, Justice Rosalie Abella identified what she sees as dangerous trends. Recalling how her Jewish parents survived the Holocaust in Eastern Europe in the 1940s, her ruminations about the modern world left some people to wonder whether she was also making veiled critiques of U.S. President Donald Trump's rise to power.

"Here we are in 2017, barely seven decades later, watching 'never again' turn into 'again and again,' and watching that wonderful democratic consensus fragment, shattered by narcissistic populism, an unhealthy tolerance for intolerance, a cavalier indifference to equality," the 70-year-old judge said. She added that there is also "a shocking disrespect for the borders between power and its independent adjudicators like the press and the courts."

Justice Abella never named any particular political leaders or places in her speech. But she was speaking inside the United States, where Mr. Trump won the presidential election last year after promising to keep Muslims and Mexicans away from it.

Since becoming President, he has stocked his cabinet with millionaires and billionaires, denounced the mainstream media as "fake news" and once used Twitter to criticize a "so-called judge" for reversing a presidential order in a way that "essentially takes law enforcement away from our country."

Justice Abella's speech is significant for trying to publicly articulate Canadian values inside the United States, at a time when the federal Liberal government appears to be walking on eggshells to avoid saying or doing anything that could inflame the Trump administration.

"It's certainly noteworthy. I think it's clear what she was talking about without her being explicit about it, and that kind of comes up to the line," said Emmett Macfarlane, a political science professor at the University of Waterloo who wrote a 2012 book on the Supreme Court of Canada.

He added that "I don't think she crossed the line, because she was speaking to things in her wheelhouse. … She obviously avoided getting into any specifics."

Judges – especially high-court judges – cherish their autonomy from the executive branches of government. Some elect to speak their minds in public, even if it means they might cause controversy by doing so.

In 2015, Chief Justice Beverley McLachlin gave a speech accusing the Canadian government of having attempted to commit a "cultural genocide" against Aboriginal peoples. During last year's U.S. presidential campaign, the U.S. Supreme Court Justice Ruth Bader Ginsburg said she could never envision Mr. Trump as president – calling him "a faker" who "really has an ego."

Justice Abella has told her life's story to several Ivy League universities over the years. At Yale last year, she spoke of living in "economically narcissistic" and "ideologically polarized" times.

Her remarks this weekend were addressed to graduates of Brandeis University in Massachusetts, which is named for a crusading American lawyer who overcame anti-semitism to become a U.S. Supreme Court judge.

Justice Abella highlighted the hardships suffered by her father who survived a Nazi concentration camp, but was always blocked from pursuing a career in law. "My father died a month before I graduated from law school, and he never lived to see his inspiration take flight in the daughter he raised to fear only injustice, indifference and cowardice."

Some observers applaud Justice Abella's messaging "This is not exclusive to Donald Trump by any means, this attitude, and where the world is going," said Kathleen Mahoney, a law professor at the University of Calgary. "I don't think Rosie's off the mark at all."

Justice Abella was appointed to the Supreme Court in 2004. Anne McLellan, a former Liberal cabinet minister from that era, said in an e-mail that "I think that her comments are more global in significance" and that it was "an outstanding commencement address."

Earlier this year, Justice Abella received a "global jurist of the year" prize. She had been nominated for it by David Jacobson, the former U.S. ambassador to Canada, who was appointed by then-president Barack Obama.

Opinion
Never forget the lessons of Europe’s concentration camps
May 22, 2017
Opinion
Fragility and discontent: We can only hope history isn’t repeating itself
November 26, 2016
Trump’s 100 days on Twitter: What he said, by the numbers
April 28, 2017 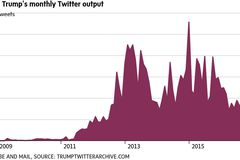