Justin Bourque rambled for nearly four hours about communism, global warming, his favourite movie (Beavis and Butthead Do America) and heavy metal versus hip-hop while casually discussing how, just hours before, he killed three RCMP officers.

Crown attorney Cameron Gunn told a sentencing hearing on Monday the officers were shot because they represented authority and government.

"He targeted them, not because of any animosity to them specifically, not for lust or greed or any of the normal things you might see in a murder sentencing," Mr. Gunn told the Court of Queen's Bench. "He targeted them specifically because of who they were, what they did, the badge they carried, the flash on their shoulders, the uniform they wore."

Mr. Bourque, 24, pleaded guilty in August to three counts of first-degree murder in the deaths of the New Brunswick officers last June.

A recording of a statement Mr. Bourque made after his shooting rampage was played on the first day of the two-day hearing, at which Mr. Gunn asked Chief Justice David Smith to impose three consecutive life sentences, or 75 years, without parole – which would make it the longest sentence in Canadian history.

A change in the law in 2011 allows the request.

Mr. Bourque sat expressionless as he watched the proceedings on a monitor in the prisoners' dock.

Then, asked how he felt, he said: "Strangely enough, I feel accomplished."

Mr. Bourque was captured after a 30-hour standoff during which a part of Moncton was locked down. More than 900 police officers were involved in the search.

Mr. Bourque's demeanour in his June 6 statement was in stark contrast to the chaotic and disturbing scene that unfolded just hours before on that June evening when he terrorized a Moncton suburb armed with guns, ammunition and a knife.

In laying out the timeline from when the shootings began to when Mr. Bourque was captured, the Crown played 911 calls from frantic residents. The court also heard wounded officer Darlene Goguen begging for help: "Just somebody help me, help me."

The court was told witnesses reported hearing bullets whiz by their heads. One woman said Mr. Bourque, who was purposefully walking through their neighbourhood, told her: "Don't worry, I am not out to kill civilians, only government officials." At another point, Mr. Bourque yelled, "Bring me more cops."

The Crown told the court how constables Dave Ross, Douglas Larche and Fabrice Gevaudan died. Constable Gevaudan was given CPR for two hours as first responders worked frantically to keep him alive.

Constable Ross died in a hail of bullets; he was found slumped in the seat of his SUV.

Constable Larche was killed beside his unmarked car as he traded shots with Mr. Bourque. Witnesses saw the constable grab his neck as he slid to the ground. He appeared to be struggling, but managed to pull the trigger two more times before collapsing, the Crown attorney said.

Another officer, Eric Dubois, was also injured in the attack.

Earlier in the day, wives of two of the slain officers delivered victim-impact statements by audio tape. Nadine Larche wrote a poem remembering the last kiss she and her husband shared. She spoke about how their three daughters will grow up without a father.

Rachael Ross was pregnant when her husband was killed. She now has a seven-week-old son as well as a two-year-old. "I am barely keeping my head above water," she said about her grief.

Mr. Bourque's father, Victor, was in the courtroom but would not speak to reporters. Justin Bourque is one of seven siblings, was home-schooled and came from a very religious family. He smoked marijuana and tried cocaine, and his parents asked him to move out of the house in December, 2012, when he brought home guns, the Crown told the court.

His mother described him as a rebellious person who didn't believe in the law, the crown said, and he told his father he felt trapped and "needed to fight."

He was also paranoid about the possibility of a third world war and characterized as a "gun fanatic," the Crown said.

In the interview, Mr. Bourque said on that June day he posted on Facebook the lyrics of a song, Hook in Mouth, by Megadeth: "A cockroach in the concrete, courthouse tan and beady eyes … A slouch with fallen arches, purging truths into great lies. A little man with a big eraser, changing history …"

And he said he thought about his options for about "20 minutes" – work in a "crappy job for the rest of my life, and there was the other …" 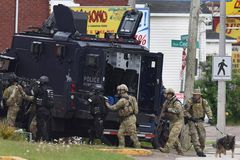 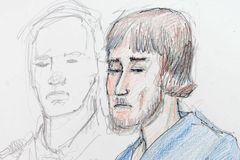