A man who killed a Toronto police officer while driving a stolen snowplow has been found not criminally responsible for his actions, further politicizing a debate about how mentally ill offenders are treated in Canada's criminal justice system.

A jury ruled on Wednesday that Richard Kachkar, 46, could not understand what he was doing when he drove the plow into 35-year-old Sergeant Ryan Russell in January 2011. The decision came as federal politicians consider legislation to toughen treatment for "high risk" offenders who are found not criminally responsible for a violent crime.

Sgt. Russell's widow, Christine, said she was "heartbroken" by the verdict, which will see Mr. Kachkar detained and treated in a hospital instead of receiving a jail sentence, and she challenged the government to take action.

"I believe Ryan deserved better than this," she told reporters. "Stephen Harper, I know you're listening."

"And there is something out there called Bill C-54 that's trying to amend some of the not criminally responsible rights. I'm going to advocate for that very hard."

The bill would allow a judge to designate someone found not criminally responsible for a crime as "high risk" if the judge determines there is a significant threat to the public. The designation would increase the time between reviews of the individual's detention and prevent the person from being considered for release at all until a judge revokes the "high risk" status. The individual would have very limited opportunities to leave custody on a temporary pass.

Asked about Mr. Kachkar's situation in the House of Commons on Wednesday, Justice Minister Rob Nicholson said he could not comment on specific cases.

"I can say the government is taking action with regard to accused individuals found not criminally responsible," Mr. Nicholson said. The question came from a backbench Conservative MP. "The not-criminally-responsible reform act would ensure that the protection of the public is paramount, create a new designation for high risk individuals, and ensure that victims have a greater voice in Canada's justice system."

Forensic psychologists and mental-health experts say the review boards that consider whether to release someone found not criminally responsible for a crime already consider public safety carefully. And they worry the legislation promotes an erroneous view of the risk that a mentally ill individual who commits a crime will re-offend after treatment.

Research suggests there is very limited risk that someone found not criminally responsible will go on to commit another crime.

The Conservative government views the legislation as a key pillar in its tough-on-crime agenda, and insists it is not meant to unfairly target those with mental illnesses. Prime Minister Stephen Harper introduced the bill at an news conference last month after he met with Darcie Clarke, the former spouse of Allan Schoenborn. Mr. Schoenborn was found not criminally responsible for killing his three young children in Merritt, B.C., in 2008, and his case has frequently been cited as an example of a too-lenient system that can allow violent offenders too much freedom.

Mr. Harper said at the time that the meeting touched him profoundly, and that he believes it is possible to create a "reasonable" system that more vigorously considers the rights of victims.

Dr. Sandy Simpson, chief of forensic psychiatry at the Centre for Addiction and Mental Health, said he worries that people who are good candidates for the not criminally responsible verdict will be scared away by the changes, which make the prospect of indefinite detention appear more likely.

"Instead of people coming through hospital under the NCR system and getting treated and emerging safely, they will instead go to the prison system where mental health systems are not well enough developed," he said. "They pose a greater risk to the public because of going through that way." 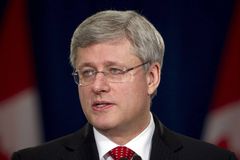