From our archives. This article was originally published in  2012. For a more recent piece about Ms. Homolka's whereabouts, please read: Homolka back in Canada, sister tells Magnotta trial

Tanned, slimmer but still wary of strangers, Karla Homolka now has three children and lives in Guadeloupe under the name Leanne Bordelais, says a new book by journalist Paula Todd, who met the notorious former convict at her new home.

The book is the first confirmation of previous, sketchier news reports that Ms. Homolka married her lawyer's brother, gave birth and moved to the French Caribbean island to escape public scrutiny.

She had lived in Quebec following her 2005 release from a 12-year sentence for her role in the lurid sex killings of two Ontario schoolgirls and the drug-induced death of her sister Tammy.

Ms. Todd wrote that she found Ms. Homolka in a small apartment with her new spouse, Thierry Bordelais, and their three small children, a girl and two boys.

"Does the woman who killed three children now have three of her own? The irony comes crashing in," Ms. Todd wrote in the book, Finding Karla: How I Tracked Down an Elusive Serial Child Killer and Discovered a Mother of Three, which is to be released in electronic format Thursday afternoon.

The encounter took place this spring, the day after Ms. Homolka turned 42, meaning on May 5. After exploring a remote Guadeloupe area where she believed Ms. Homolka had relocated, Ms. Todd wrote that she found herself on a gravel sideroad, staring at a mailbox that said "Leanne Bordelais."

Beyond the mailbox was a fenced apartment building. On the second floor, "I look through it into a tiny, tidy kitchen. There, bent over the sink, is a petite woman with light hair. She turns her face sideways to see who's arriving. Then she freezes ...

"I have found Karla Homolka, and I'm not sure which of us is more shocked."

Mr. Bordelais wanted Ms. Todd to leave but Ms. Homolka, though distrustful, was not outright dismissive and took her visitor to another room and quizzed her.

Ms. Todd explained that, as a journalist and lawyer, she wanted to research her life after prison.

"Why should I trust you? I have everything to lose," Ms. Homolka replied.

When Ms. Todd tried to make small talk, saying that her host seemed to be a good mother, Ms. Homolka snapped back, "That's funny that you think you can judge that after seeing me this short time."

Despite Ms. Homolka's caginess, she kept her visitor for an hour. "I'd say she was lonely and slightly bored," Ms. Todd said.

Mr. Bordelais reappeared, however, holding a phone with their lawyer on the line, ending the conversation before Ms. Homolka had made any substantive remark.

The book said that Ms. Homolka at that point made a slip that confirmed previous speculations that Mr. Bordelais is the brother of her long-time prison lawyer, Sylvie Bordelais.

Ms. Homolka ended the meeting, refusing to comment further. "Nobody cares, and everything I've said is off the record," she told Ms. Todd.

Formerly married to the sex predator Paul Bernardo, Ms. Homolka was released from prison after serving her entire sentence in the deaths of Kristen French and Leslie Mahaffy in the 1990s. She settled in Quebec, hoping that she was less known among francophones.

She changed her name to Karla Leanne Teale but reporters twice retraced her, at a suburban hardware store where she worked, then near an apartment in east-end Montreal. By 2007, the TVA television network reported that she had left for the Caribbean.

The ebook is available on Kobo, Kindle Singles, iBooks and Nook. 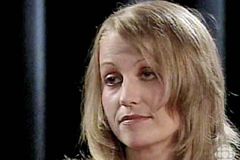