Last week, a retired prison guard volunteering at the Penitentiary Museum across the road from the Kingston Penitentiary, looked out the window at his old workplace. "Today they're moving the patients out of the hospital," he muttered … to no one at all. He seemed sad. The hospital had cared for approximately 130 mentally ill prisoners on the penitentiary site, and now was sending their patients to units at nearby Millhaven, a maximum-security prison, and to Bath, a medium-security prison.

Many other people in Kingston are sad to see the penitentiary close. They understand it's old – after all, the first building opened in 1835 – but they love it. So many of them have worked there or volunteered there. It's been a lab and training school for students from Queen's University in law, psychology, medicine, and education. Professors often held classes in the penitentiary for inmates; one was the distinguished artist André Biéler who ran a course he called "Escape Through Art."

Kingston Penitentiary is the most famous prison in Canada, and not just because of the notorious prisoners who have done their time there – men such as the late murderers Helmuth Buxbaum and Clifford Olson, as well as Paul Bernardo (now moved to Millhaven), Mohammad and Hamed Shafia (presumed to have been moved to Millhaven) and Russell Williams, who was moved to Port-Cartier prison in Quebec several months ago. Its fame is also due to such writers as Charles Dickens, who toured the place in 1842 and called it "an admirable gaol."

Much of the prison's reputation comes from the important role its early inmates played in building the city. They laboured in a massive limestone quarry just north of the charming village of Portsmouth – which lies just west of the prison and was home to many of the guards – to break the stone for many of the city's finest buildings. Today, that quarry, made famous by writer Merilyn Simonds in her novel, The Convict Lover, is covered by the green grass of Richardson Stadium on the Queen's University campus.

Inside the prison, other men worked in various trades; they learned to make furniture, for example, and when Sir John A. Macdonald died in June, 1891, his coffin rested on a large wooden table in Kingston City Hall, a table made in the prison's furniture shop.

Kingstonians have a great fondness for KP, which was designated a National Historic Site on Feb. 23, 1990. Other cities envy the prosperity it has brought the city; over the years, eight other prisons were built in the Kingston area, providing a formidable local economy bolstered by a large military base, Queen's University, St. Lawrence College and three fine hospitals.

What worries many people now is what will happen to the penitentiary after it shuts Monday. The biggest fear? That it will be torn down, despite its designated status, and turned into a subdivision.

But if politicians needed any proof of how much Kingstonians love KP, they need only look at the results on the online sale of tickets to tour it in mid-October, in a fundraiser for the United Way.

"We sold close to 9,200 tickets and raised about $158,000," said Bhavana Varma, the organization's president and CEO. "All the tickets were gone within minutes."

And what of the inmates who have moved out of KP? Up to a week ago there were at least 400 men there. All have gone. Most have been taken to Millhaven, a half-hour's drive to the west.

"The whole routine here is a shambles," said one prisoner who has moved from Kingston Penitentiary to Millhaven. "They're trying to combine two fully functional systems into one coherent organism."

But, he added, what he likes about Millhaven is that he can hear the sound of a train. "And I can report seeing a dragonfly, a damsel fly, five house swallows, two turkey buzzards, four hawks and a wild hen turkey."

NOTABLE MOMENTS IN THE PRISON'S HISTORY

June 1, 1835: Kingston Penitentiary opens as the provincial penitentiary of the Province of Upper Canada with six inmates.

Oct. 1, 1836: A sample menu for prisoners includes: for breakfast, half a pound of bread, a third of a pound of fresh beef, potatoes, a pint of coffee and molasses. For dinner, inmates receive the same meal, replacing the coffee and molasses with a quart of soup. Sunday supper is a larger quantity of bread alongside the same fresh beef and potatoes, but for the rest of the week, the prisoners eat a quart of porridge with a side of molasses for supper.

1843: Grace Marks, a 16-year-old maid, is convicted of killing her wealthy boss, Thomas Kinnear, and his pregnant housekeeper and mistress, Nancy Montgomery, in Richmond Hill, Ont. Her accomplice, James McDermott is hanged. Her story inspires a Margaret Atwood novel, Alias Grace, in 1996.

1847: Prisoners are subjected to a variety of cruel punishments including The Box, a coffin-shaped wooden container that is held upright with an inmate trapped inside for six to nine hours. Guards sometimes jab the prisoner with a stick through the breathing hole. The cat-o'-nine-tails is a rawhide whip used to lash prisoners no more than 36 times, or 50 for assaulting an officer. A surgeon remains nearby to treat the open wounds that most recipients of the punishment develop.

May 30, 1849: Politician and Toronto Globe editor George Brown drafts The Brown Commission, a scathing indictment of inhumane treatment of prisoners that leads to the dismissal of warden Henry Smith.

Aug, 5, 1857: James Donnelly, the patriarch of the Black Donnellys, is sentenced to death for killing his neighbour, Patrick Farrell, near London, Ont. The sentence is commuted to seven years at the Kingston Penitentiary. Mr. Donnelly, along with four other family members, is later killed in his home on Feb. 4, 1880.

April 21, 1920: Marie-Anne Houde is convicted of murdering her stepdaughter, Aurore Gagnon, 10, in Fortierville, Que. An autopsy reveals 54 wounds to Aurore's body, most likely resulting from blows. Ms. Houde's death sentence is commuted to life in prison in Kingston.

1932: Tim Buck, trade unionist and general secretary of the Communist Party of Canada, spends more than two years in the jail after he is convicted of communist agitation in 1931. Several shots are fired into his cell after a prison riot on Oct. 20, 1932, but authorities deny allegations of an assassination attempt. Mr. Buck is not in his cell when the shots are fired.

Oct. 17, 1932: The prison's first major riot erupts. The six-day disturbance sees inmates march to acting warden Gilbert Smith and demand reforms such as more recreation time, family visits and better food. Refusing to inform the federal government of their grievances, Mr. Smith calls instead for military assistance. The rioting prisoners take hostages and barricade themselves in the prison's shopping area before Mr. Smith assures them he will take their demands to Ottawa.

Oct.16, 1952: Edwin Boyd, the Toronto bank robber and folk hero, is sentenced to life in prison at the jail. Mr. Boyd has a gang of bandits and is famous for his heists and two escapes from the Don Jail. His story inspires the 2011 movie Citizen Gangster.

Aug. 15, 1954: Prison riots spreading across North America reach Kingston Penitentiary. A two-hour riot involving 900 inmates erupts, resulting in extensive damage. The convicts start a major fire that destroys the prison's iconic grand dome. Two days later, more fires hit the prison's shops and horse stable. The army and RCMP help quell the chaos. Public opinion is strongly against the prisoners and calls for prison reform are largely ignored. Instead, the prisoners are ordered to repair the damage they have inflicted on the shops and main roof.

1959: Steven Truscott is sentenced to death as a 14-year-old for the murder of 12-year-old Lynne Harper near Clinton, Ont. His sentence is later commuted to life in Kingston. He maintains his innocence and is formally acquitted in 2007, when his conviction is declared a miscarriage of justice.

1978: Roger Caron, an incorrigible career robber from Cornwall, Ont. who spent much of his life behind bars, writes a highly acclaimed prison memoir, Go-Boy! Memories of a Life Behind Bars. He is notorious for his many escapes from custody. Mr. Caron also writes Bingo!, an eyewitness account of the 1971 riots at Kingston Penitentiary, before he dies in 2012.

February, 1982: Clifford Olson, known as the Beast of British Columbia, is sent to Kingston after being convicted of killing 11 children. He raped, stabbed, bludgeoned or strangled his victims. He may have killed more.

1986: Helmuth Buxbaum, millionaire from London, Ont., is convicted of paying a hitman to kill his wife, Hanna, on the side of a road in 1984. Evidence suggests the seemingly wholesome Mr. Buxbaum is a cocaine addict with an appetite for young prostitutes. He is represented by prominent Toronto lawyer Edward Greenspan.

Feb. 23, 1990: The penitentiary is recognized as a national historic site of Canada.

Sept. 1, 1995: Paul Bernardo is convicted in Toronto of raping and killing schoolgirls Leslie Mahaffy and Kristen French at his home in St. Catharines, Ont. His videos of his victims in captivity seal his conviction.

May, 1999: Bank robber Ty Conn stages the first successful escape from Kingston Penitentiary in more than four decades. He is found dead in Toronto two weeks later, apparently from taking his own life during a standoff with police.

Oct. 21, 2010: The former commander of CFB Trenton, Russell Williams, is sentenced to life in prison in Kingston for killing two women near the eastern Ontario military base.

Jan. 29, 2012: Mohammad Shafia, an Afghan-Canadian businessman, is convicted, along with his son and second wife, of first-degree murder for drowning his three teenage daughters and his first wife in June, 2009, near Kingston.

April 19, 2012: The government announces plans to close the penitentiary.

Sept. 30, 2013: Kingston Penitentiary formally ceases to be a federal prison.

Written by Sahar Fatima and the Canadian Press 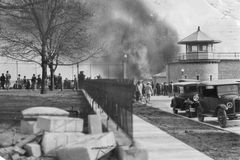 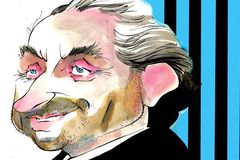 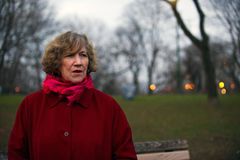 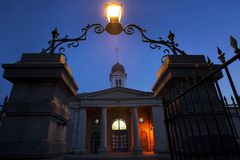