It's a word so many of us hear at the end of every day. But no one said it like Knowlton.

He didn't say it as the speech coaches might have taught it. It didn't come with the authority vested in him by his anchor desk. Knowlton's "Goodnight" was friendly, even folksy. It was a lullaby for Canada, delivered with charm so genuine, it became something to look forward to at the end of The National.

That was Knowlton Nash. He was the biggest name in television news, but in so many ways he was still the kid who had sold newspapers on the corner and thought covering the news was gosh-darn exciting.

Before he sat at the anchor desk, he had already proven himself in the field, covering some of the biggest stories of his era. He was in Washington in the 1960s. He loved the hurly-burly of politics and became closer to a president of the United States and his family than is now imaginable for a Canadian journalist, perhaps any journalist. So he was perfectly positioned to tell Canadians about the Cold War, the space race, the American civil-rights struggle, the Vietnam War protests, and the gut-wrenching assassinations that so stained a decade.

I'll never forget walking into his Toronto office in the late 1970s shortly after he became our Chief Correspondent. I saw an intriguing glass cigarette case on his desk. There was a golden model of a DC-3 in the glass. It was inscribed "Caroline," and as Knowlton proudly told me, it was the plane the then Senator John F. Kennedy named after his daughter, and used in his 1960 presidential campaign. The case was a gift from the candidate to each of the reporters who were with him covering the campaign that made history. Knowlton's name was on the case. And there, also buried in the glass, was Kennedy's signature.

I was eye-bulging impressed. In fact, I was blown away. The case said so much, including that a DC-3 only carried a few dozen people – that's how small the traveling presidential campaign entourage was in those days. That meant this treasured memento was one of only a few. But here's the thing: Knowlton just left it on his desk, in an office he never locked. It had great sentimental value for him. He was deeply affected by Kennedy's assassination, even walking at the end of his funeral procession. Yet he trusted that no one would ever steal his treasured cigarette case. And they never did.

That said a lot about Knowlton. He wasn't an anchor who wanted to be separated, locked away from the people he worked with or worked for. And to be clear on that last point, he believed he worked for YOU. Not for the CBC. For you. That was his understanding of public broadcasting.

Knowlton was the bridge between the way journalism once was and the way it is now. He wasn't pleased with news programs that sold sizzle instead of steak. He wrote a book about that, Trivia Pursuit. He certainly wasn't opposed to new technologies that made it possible to deliver news faster and more widely. But he was adamant that news values shouldn't change.

Get the story. Make sure it's right. Tell it straight.

A plain, no-nonsense theory but one so honest to the core of what our profession is all about.

At the end of it all, Knowlton's "Goodnight" brought a smile to us no matter what the news was.

I can hear it now, and in this sad time, it is comforting still. 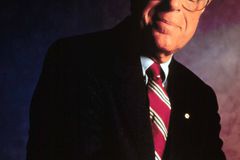 CBC icon Knowlton Nash dead at 86
May 24, 2014
Knowlton Nash
August 24, 2005
Journalism prize founded in news anchor's honour
December 8, 2000
Follow us on Twitter @globeandmail Opens in a new window
Report an error Editorial code of conduct
Due to technical reasons, we have temporarily removed commenting from our articles. We hope to have this fixed soon. Thank you for your patience. If you are looking to give feedback on our new site, please send it along to feedback@globeandmail.com. If you want to write a letter to the editor, please forward to letters@globeandmail.com.
Comments