After spending much of his adult life in prison for a grisly murder he did not commit, Kyle Unger is now suing for compensation.

Unger is seeking $14.5 million – roughly one million for every year he spent behind bars – plus interest for being wrongfully convicted of killing a teenaged girl at a rock concert south of Winnipeg in 1990.

"The ... grievous loss, damage and expense sustained by the plaintiff includes loss of freedom, loss of enjoyment of life, severe emotional trauma and distress," reads a statement of claim filed by Mr. Unger's lawyers Wednesday in Manitoba's Court of Queen's Bench.

"He was deprived of his youth, his education and a normal working life."

Mr. Unger, who is now 40, was convicted of killing 16-year-old Brigitte Grenier at a music festival near Roseisle, Man. Ms. Grenier had been beaten, strangled and mutilated and was found in a wooded area at the festival site.

He was sentenced to life in prison, but as the years went by, the evidence used to convict him started to unravel.

An RCMP expert testified that a hair found on Ms. Grenier's sweater belonged to Mr. Unger. It was the only physical evidence against him, but DNA tests in 2005 showed the hair belonged to someone else.

The only witness who claimed to have seen Mr. Unger kill the girl was his co-accused, Timothy Houlahan, who committed suicide in 1994 while waiting for a retrial.

The other key piece of evidence – a confession Mr. Unger gave to undercover police officers – also came into question. The officers posed as gang members looking to recruit Mr. Unger and said he had to prove to them he had committed a serious crime if he wanted to join the lucrative gang life.

Mr. Unger told them he had killed Ms. Grenier but got several facts wrong, including the existence of a bridge at the festival site that was only constructed several months after the murder.

In 2009, the federal justice minister determined that the conviction was a likely miscarriage of justice, and months later, he was formally acquitted of the killing.

"The police defendants, the prosecuting defendants and (RCMP hair analyst Raymond) Cadieux individually, jointly and collectively breached the plaintiff's constitutional rights... and conspired to do so," reads the statement of claim.

The statement includes claims that have not been proven in court. None of the defendants has filed statements of defence.

A Manitoba government spokesperson said the government would not comment on the matter as it is before the courts.

Kyle Unger acquitted of murder, tries to 'let it all absorb'
October 23, 2009 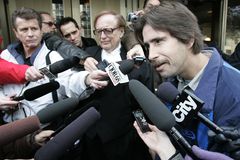