The case of three men accused of 47 counts of criminal negligence causing death in connection with the Lac-Megantic derailment has been delayed until April 4, a Crown official said Tuesday.

The three have all pleaded not guilty and opted for a jury trial.

Boucher said lawyers for the accused agreed to table motions by March 1.

The Crown had previously suggested possibly changing venues over concerns about finding enough bilingual jurors in the largely francophone region around Lac-Megantic, located about 250 kilometres east of Montreal.

But Boucher said the Crown told the court Tuesday it has no intention of moving the trial away from the small town.

On July 6, 2013, a parked train carrying crude oil from North Dakota broke loose, roared downhill toward Lac-Megantic and bounced off the tracks, wiping out much of the downtown area and killing 47 people.

A charge of criminal negligence carries a maximum sentence of life in prison upon conviction.

The charges were laid in May 2014 following a Quebec provincial police investigation into the derailment.

Lawyers for the defendants did not return calls Tuesday.

Harding, Labrie and Demaitre also face federal charges relating to Fisheries Act violations following an Environment Canada investigation into the crude oil that flowed into the Lac-Megantic lake and the Chaudiere River.

Demaitre and Harding have additionally been charged under the Railway Safety Act for failing to ensure the train's brakes were properly set before it was left unmanned the night of the disaster.

Canadian Pacific Railway, the company that handed off the train to MMA in a Montreal rail yard for the final leg of its journey to an oil refinery in New Brunswick, is being sued by the Quebec government for more than $400 million.

The government says CP (TSX:CP) is partly to blame for the derailment.

CP spokesman Martin Cej said Tuesday the company "was not involved in this incident in any way and will defend itself against future litigation."

He said the train that derailed did not belong to CP and was being operated by MMA on the now-defunct rail company's proper tracks.

In separate developments in October, a Quebec judge and a U.S. judge signed off on a $450-million settlement fund for victims and creditors of the train disaster.

CP is the only company accused in the tragedy to have refused to contribute to the package.

The railroad maintains it does not have any responsibility in the disaster.

After negotiations with lawyers for MMA, CP agreed to drop its motions against the fund if all sides agreed to alter the language of the settlement terms in order to give CP some legal assurances if the railway company is taken to court over its responsibility in the derailment. 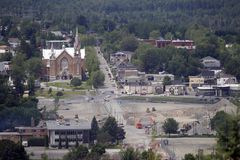 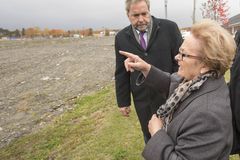 Compensation should flow soon to Lac-Mégantic victims
May 15, 2018 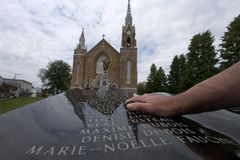