Quebec provincial police executed a search warrant on the Canadian headquarters of the Montreal, Maine & Atlantic Railway, saying they were looking for evidence of criminal negligence related to this month's deadly crash in Lac-Mégantic.

As police gathered papers on the company's operations on Thursday, the mayor of Lac-Mégantic announced that MM&A had missed a deadline to pay nearly $4-million in cleanup costs related to the train derailment. Mayor Colette Roy-Laroche said she had received no reply to a legal ultimatum issued by her office earlier this week.

On July 6, a runaway train belonging to MM&A jumped the tracks in Lac-Mégantic, causing a series of early-morning explosions that killed an estimated 47 people and levelled the downtown core. Police confirmed earlier this month that they were conducting a criminal investigation into the cause of the disaster and said they were interviewing all MM&A employees along the rail line from Farnham, Que., to Lac-Mégantic.

Police entered MM&A's office in Farnham – about one hour southeast of Montreal – around 10:30 a.m. Thursday and were still in the building in the early evening, a spokesman for the Sûreté du Québec said.

"They are retrieving elements of proof to support our potential accusation of criminal negligence," Inspector Michel Forget said, adding that police would remain at the building "as long as needed."

The Farnham office is located in the town's former railway station, a two-storey heritage building directly beside the train tracks. Most of MM&A's daily business appears to be conducted on the second floor. The office contains the company's policy documents, rules and regulations, information about what is being carried on its trains and daily bulletins describing the state of the train tracks.

MM&A also retains audio recordings of conversations between its dispatchers and engineers. A source familiar with the company's operations told The Globe and Mail that police had previously obtained copies of the audio recordings from the night before the crash.

MM&A's chairman, Edward Burkhardt, has cast blame on engineer Tom Harding for allegedly failing to apply enough handbrakes to stop the train from rolling down the tracks when its air-brake system stopped working. Mr. Harding is from Farnham, but has been staying outside of the town to escape media attention, according to his lawyer.

The lawyer has said the dispatcher on duty the night of the accident told Mr. Harding there had been a fire in the train's locomotive, but that the situation was under control.

The company recently laid off dozens of employees, including 19 based in Quebec. A notice posted on the second floor of the office offered counselling for employees troubled by the disaster in Lac-Mégantic and reminded them to direct questions from a police agency to MM&A's legal representatives.

In the weeks following the derailment, investigators from the Quebec provincial police canvassed local businesses for security-camera footage detailing the evening of the crash.

Last week, the cleanup effort in Lac-Mégantic ground to a halt when the 20 different companies working to pump and scoop the oil spilled in the village's downtown feared they wouldn't be paid. Work quickly resumed when Premier Pauline Marois told company officials the government would cover the tab.

Despite MM&A's silence on its outstanding cleanup bills, the money was paid using emergency funds made available by Quebec's provincial government. A spokesperson for MD-UN, the company co-ordinating the cleanup, confirmed on Thursday the businesses had been paid and work would continue.

Ms. Roy-Laroche confirmed that her office is considering legal action against the beleaguered railway. 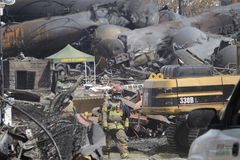 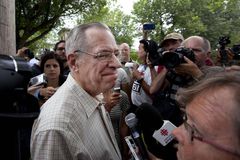 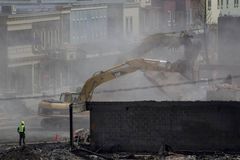 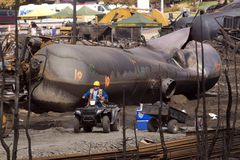 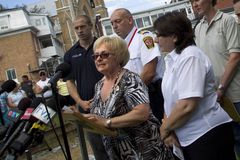 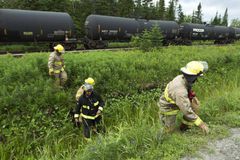