When loaded trains begin moving through downtown Lac-Mégantic, Que., this month, they will pass through the heart of the damaged town and within sight of dozens of buildings that were levelled after an oil train exploded this summer, killing 47 people.

Discussions are under way for a bypass to be built around the town, but it is unclear how long those talks could take and whether the town will have any power to prevent oil from moving through its boundaries once again. Lac-Mégantic is still struggling to rebuild after the train carrying crude oil derailed July 6, setting off a series of explosions.

The first trains should begin servicing the industrial sector before the New Year, according to a trustee for Montreal, Maine & Atlantic.

While rail traffic will initially be limited to dry goods, the town does not have the right to determine what rolls through by rail in the future.

MM&A, the company at the centre of the disaster, filed for creditor protection earlier this year.

Railway trustee Robert Keach said the railway could have a new owner by mid-January, and it will be up to that company to determine what types of goods travel through the town.

Given that Lac-Mégantic lies on a shipping route between oil fields in North Dakota and a refinery in New Brunswick, there is considerable demand to move crude on those tracks.

After the Lac-Mégantic derailment, many Canadian municipalities expressed frustration that they don't know what hazardous goods are moving through their territory by rail.

The Globe and Mail has documented the potentially explosive properties of oil drawn from the Bakken formation in North Dakota that is frequently transported by rail because there is no pipeline in the region.

However, despite the deadly explosions in Lac-Mégantic, the federal government has not taken any steps to consider crude oil a particularly dangerous product when shipped by rail.

Other potentially hazardous materials that are considered to be unusually explosive, or dangerous for other reasons, come with added safety requirements. None of these is in place after the Lac-Mégantic disaster.

The return of trains to Lac-Mégantic is an emotional issue for the town. Pascal Halle, head of the local chamber of commerce, said train service is important to the town's economy, but he is hopeful that a new track will be built.

Local companies, including a particle board factory where many residents work, depend on the railway to move their goods.

A spokesman for the Quebec transport minister said the government is studying "all scenarios" for a permanent track that would bypass downtown Lac-Mégantic, but could not provide further details.

Kenneth Peel, a lawyer in Toronto specializing in railway law, said the Lac-Mégantic derailment has exposed several shortcomings in the oversight of oil shipments by rail. "It's an appalling case, which has alarmed anyone who's concerned about safe rail operations," he said.

However, given the way Canadian laws are set up, with the railways operating solely under federal powers that supersede the wishes of a municipality, there is little the town can do if it doesn't want trains, even those carrying mass quantities of crude, moving through the damaged core.

Transport Canada declined to answer questions about whether oil would be permitted to move through Lac-Mégantic in the future.

A spokeswoman said the department would ensure the tracks are safe before the first trains start running.

Mr. Keach said the municipality will be given information about safety, inspections and detailed plans about train operations.

MM&A has agreed not to run oil on the tracks through Lac-Mégantic, but a new buyer would not be prevented from doing so, he said.

"We're going to proceed incrementally and cautiously," he said.

Yannick Gagné, owner of the Musi-Café bar that was destroyed in the disaster, said he can accept the idea of trains running again to service the town's industrial park, but he does not want to see oil tankers return to Lac-Mégantic.

"I can't work, I've lost my business," Mr. Gagné said. "If these companies can succeed easily to start their work again, to transport oil [through Lac-Mégantic], that's a great injustice to me." 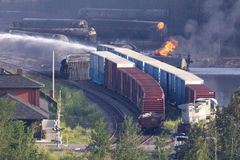 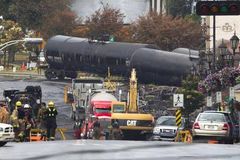 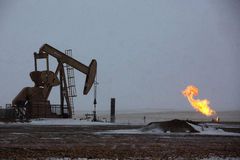 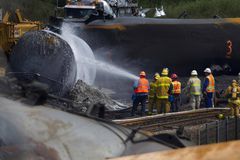