Not one North Atlantic right whale calf has been spotted in the species' usual breeding grounds, raising fresh concern over the long-term fate of the endangered mammals following a record number of deaths last year.

Clay George, a biologist with Georgia's Department of Natural Resources, said Monday that the whales tend to give birth off Georgia and Florida from December until the end of March, with the peak period being in January and February.

But, he says coastal surveys have not turned up one mother-calf pair – a grim discovery after one of the highest mortality rates for the imperilled animals in recent history.

"We're kind of running out of time at this point to see them with calves and every day that goes by, it gets a little more concerning," he said from Brunswick, Georgia. "And it's concerning mainly because of the high level of mortality that's been occurring over the last year.

"When deaths start exceeding births, then the population is going to decline and that's where right whales appear to be at this time."

At least 18 North Atlantic right whales were found dead in Canadian and U.S. waters over the last year – dropping the global population to less than 450. It's suspected that many of them died after getting ensnared in fishing gear or hit by large vessels as they transited from southern waters into the Gulf of St. Lawrence and other areas.

Philip Hamilton, a research scientist at the Anderson Cabot Center for Ocean Life in Boston, said the apparent lack of calves could be linked to a lack of food, a shift in the calving grounds or environmental changes that could be affecting the breeding females, of which there are only about 100 left in the world.

Hamilton, who has been specializing in right whale photo identification since 1986, said they have never seen a year without calves, which is particularly alarming combined with the right whales' high death toll.

"It's actually heartbreaking in general," he said. "I'm concerned about this being a more prolonged, permanent shift."

He said there has been a shift in the whales' migration habits over the last 30 years, with some heading to Cape Cod Bay, the Bay of Fundy and the Gulf of St. Lawrence to feed in the spring and summer. The speculation is that the endangered animals tend to go where there is an abundance of their main sources of food, zooplankton.

Scientists suspect the quantity of food has been poor in some years, sending the whales in other directions, leaving them in poorer condition and lowering the calving rate. Hamilton said the lack of food may leave the females less capable of becoming pregnant, which was possibly seen in 2000 when a single calf was born and the adults appeared thinner and less healthy.

Chronic entanglements and noise may also cause the females stress, which could be linked to lower reproduction rates, he said.

George said there has been a decline in calving since 2011. Where once there was an average of more than 20 calves born every year, the rate has since been cut to about 12.

But he says there can be great fluctuation in the calving numbers, suggesting that this may be a blip. There was only one calf born one year in the late 1990s, but 31 calves were born the next. Five calves were born last year.

Both researchers say they will be closely watching to see whether mother-calf pairs are seen in their typical feeding grounds this spring and summer.

There have been concerns that if the mortalities continue, the species could go extinct by 2040.

Hamilton said the whales, which are thought to have the same average lifespan as humans, used to give birth every three years. But, it has now dropped to about every seven years. 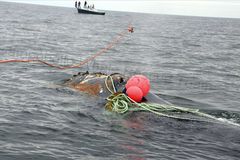