Saskatchewan's prosperity is at stake Monday in a high-consequence election. So, too, is Brad Wall's legacy.

The wildly popular politician is expected to win Saskatchewan's general election for a third term, giving him the chance to become the province's second-longest serving premier behind Tommy Douglas. But the Saskatchewan Party's longevity is not what makes this election historic.

This is a sleepy campaign despite the province's teetering economy. Mr. Wall, perennially associated with the future of the federal Conservative party, will be judged not on the seven straight budgets he balanced prior to fiscal 2015-2016, but on whether he keeps his promise to eliminate the deficit by 2017-2018 – and how he does it.

Saskatchewan, fuelled by resource industries ranging from agriculture to oil, boomed under Mr. Wall. Assuming experts predicting a landslide are right, the 50-year-old's next term will be the first sustained stretch of economic woes he will have to manage since he came to power in 2007. He will have to make difficult, and potentially unpopular, choices.

"I'm the first one to recognize the good fortune we've had in terms of timing," Mr. Wall said in an interview. "There's no question there's going to be challenges for government in the next while … What we're going to have to do is manage the expense side, and we've been doing that even when times are good."

Dionne Pohler, a professor at the Johnson-Shoyama Graduate School of Public Policy at the University of Saskatchewan, argues this term will be Mr. Wall's most important years in government.

"These next four years will really define him and his party in terms of their legacy," she said. "When you think about the [Roy] Romanow government, what defined them was how they handled the really, really awful time."

The wisdom of Mr. Wall's choices in a downturn, however, may not be obvious until long after he leaves office, she said.

Mr. Wall's plan is vague. The Saskatchewan Party, which he tightly manages, did not release a budget prior to calling the election. It was a politically astute move, experts argue, given the financial crunch. Instead, Mr. Wall points to his party's campaign platform and the province's third-quarter budget update.

"I've never seen the transparency of a government tabling a budget and then a day later calling an election because those budgets never get implemented," he said. "Even when the governing party has done that, has [been] re-elected, the budgets change anyway based on commitments they made anyway based on the campaign."

"The best indicator of future behaviour is past behaviour," Mr. Wall said. "We've worked hard to be fiscally responsible, to balance the budget, but also to continue to make the investments, especially in health care, and education, and social services."

The provincial New Democratic Party, led by Cam Broten, has been unable to capitalize on the Sask Party's decision to keep the details of its financial plans under wraps until after the election. Indeed, Mr. Wall's challengers have been unable to carve out any defining issue that could sway voters Monday.

"It is an odd election," Tom McIntosh, the head of the University of Regina's politics and international studies department, said. "There isn't a galvanizing issue … People aren't spending long hours into the evening debating the pros and cons of government ownership of liquor stores."

Mr. Broten's campaign did not make the NDP Leader available for an interview.

Sixty-one ridings are up for grabs Monday. In the last election, when 58 seats were available, the Sask Party won 49 ridings and the NDP secured nine constituencies. The Sask Party, which leans right of the centre, dominates the Prairie province's rural ridings.

Mr. Wall is, in part, campaigning on a savings and debt repayment plan that will not happen if his party's budget forecasts are correct.

The Sask Party promises to build a $500-million balance in the province's rainy day fund using oil revenue once the benchmark price of crude in North America exceeds $75 (U.S.) per barrel. Once the account, known as the Growth and Financial Security Fund, hits $500-million, oil revenue will be directed toward reducing debt, so long as the price of crude is above $75 per barrel, according to the party's campaign platform released March 19.

The government, however, assumes oil will trade at an average of $64.25 (U.S.) per barrel in fiscal 2019-2020, according to the province's budget update released Feb. 29. That is the government's richest projection over the four-year period. In short, Mr. Wall's oil forecast makes this fiscal promise moot.

Saskatchewan's real gross domestic product is expected to grow "a sluggish" 0.5 per cent this year after contracting an expected 0.5 per cent in 2015, according to Robert Kavcic, an economist at the Bank of Montreal. "This is a stark reversal from rip-roaring" average growth of nearly 4 per cent per year over the prior five years, he said.

Oil and gas accounts for about 15 per cent of Saskatchewan's GDP, Mr. Kavcic said. That is significant, but well below Alberta's reliance on energy. Revenue derived from potash, uranium, agriculture and Saskatchewan's numerous Crown corporations also contribute to the province's bank accounts.

Saskatoon's Mr. Broten and the NDP, with a small caucus and scattershot campaign, started the election in a weak position. Swift Current's Mr. Wall is popular and voters have been willing to forgive or excuse the Sask Party's shortcomings. In turn, this consequential election was never a scrappy battle.

"I don't feel like either party really is trying," Ms. Pohler said. "They kind of both resigned to the fact that the Sask Party is going to get in." 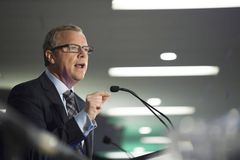 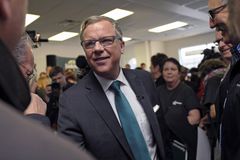