The 18-year-old Western University student whose sexual-assault allegation was dismissed as "unfounded" by a detective who relied on rape myths and stereotypes during his investigation was the victim of systemic discrimination based on gender, a lawsuit filed against the officer and the London Police Services Board on Friday alleges.

The claim, which is reminiscent of the landmark Jane Doe case brought against the Toronto police force in the 1990s, argues that systemic police mishandling of sexual-assault cases violates a woman's Charter right to equality.

"The LPS handling of sexual assault claims reveals a pattern of discriminatory conduct and attitudes against victims of sexual assault," alleges the statement of claim, which has not been proven in court.

Unfounded: How to access police documents connected to your sexual-assault complaint

Ava Williams, who filed the suit and is now a law student, was a central figure in The Globe and Mail's Unfounded investigation. In the series, she requested to only be identified by her first name, but she has since decided to come forward publicly.

After she saw the reaction to the series and realized that others had faced the same treatment, the now 24-year-old decided to pursue the litigation.

"I feel like I'm in a place that I can use my voice to help other people," she said.

In response to The Globe's reporting, the London Police Service launched an investigation into how her case was dealt with, but the force ultimately concluded that the detective's behaviour did not meet the high threshold needed for a misconduct charge.

Ms. Williams said without the court challenge, she is concerned that police services will not change on their own.

"This will keep happening if not addressed within the legal system. I don't have the utmost faith in internal police reviews. While I think they're well intentioned, I think there needs to be some sort of outside entity involved," she said.

In addition to asking for unnamed monetary damages, the claim includes an unusual demand: that the London Police Service be ordered to implement an annual, external review of sex-assault cases based on the Philadelphia Model, an oversight program that's been running in that city since 2000 in which front-line advocates are invited to audit police case files for signs of bias and investigative missteps.

The claim cites statistics from a Globe investigation that revealed the London Police Service dismissed 30 per cent of sex-assault allegations as unfounded – meaning the investigating officer believes no crime occurred. By comparison, the service's unfounded rate for physical assault was less than 2 per cent.

"These statistics are a clear sign of the operation of discriminatory practices, based on rape myths, in determining whether sexual assault cases are worthy of further attention," alleges the claim, which is being handled by constitutional-rights lawyer Joseph Arvay, who successfully argued the right-to-die case before the Supreme Court.

Mr. Arvay said the decision was made to start with London, because The Globe's reporting showed the service had one of the highest unfounded rates among forces in large Canadian cities. However, the intention is for the effects to extend beyond the city's borders.

"We assert that Ava has public-interest standing, which means she's there to seek a remedy not just for herself but for all women who have suffered the same kind of systemic discrimination," Mr. Arvay said.

Mr. Arvay added that there is potential for the litigation to expand into a class action, but that would depend on other complainants coming forward.

In October, 2010, Ms. Williams reported that she was raped by a man at a keg party near campus, while heavily intoxicated. During her videotaped statement, Ms. Williams was asked a series of questions that the lawsuit alleges is proof that the detective's judgment was coloured by discredited rape mythology.

In the roughly 35-minute interview, Detective Paul Gambriel asked Ms. Williams how she came to be naked, because they found her clothing and it wasn't torn, "implying that she did not struggle and therefore consented," the claim states. (There is no requirement in Canadian law to physically resist a sexual assault.) The lawsuit alleges that the detective was ignorant of consent law, as he seemed to ignore the fact that Ms. Williams clearly remembered saying "no." He also, the suit claims, failed to consider that she may have been too intoxicated to consent to sexual activity – in Canada, someone who is intoxicated to the point of incapacity cannot agree to sex. Instead, the claim continues, Det. Gambriel implied "that the plaintiff brought this on herself due to her intoxication."

Police were quickly able to identify the suspect, although Ms. Williams does not know his identity. The man, who Ms. Williams was told was a student at Western University at the time, was given a warning by officers before the case was closed as unfounded.

Legal experts say the lawsuit could have significant consequences for Canadian law enforcement.

"If it was litigated all the way up to the Supreme Court of Canada and the Supreme Court concluded that there was a constitutional obligation on the part of the police to adopt the Philadelphia Model, that would have massive ramifications for police services – that's shooting for the stars," said Elaine Craig, a law professor at Dalhousie University who specializes in both sex-assault and constitutional law.

"But I think just bringing a claim of this sort is groundbreaking, regardless of the outcome because … it's framing the issue as a matter of constitutionality – as a fundamental right."

Kent Roach, a law professor at the University of Toronto and an expert on constitutional remedies, said the Philadelphia Model request is unique.

Generally, courts prefer not to be involved in a dispute once a case is done, but there is precedent, he said. That case concerned the implementation of French-language school rights in Nova Scotia. In a 5-4 decision in 2003, the Supreme Court sided with a trial judge's decision that the government should report back on progress making changes.

Elizabeth Sheehy, a law professor at the University of Ottawa, said the case raises many of the same issues as the Jane Doe lawsuit. In 1998, a judge concluded that Toronto police had failed to warn the woman – who was raped in her apartment at knifepoint in 1986 – about a serial predator in her neighbourhood and that the service's sexual-assault practices discriminated against women. The ruling prompted a massive policy overhaul within Toronto, but appears to have had little spillover effect in other jurisdictions.

But the Jane Doe lawsuit was largely a negligence case, whereas the recently filed claim in London takes the issue a constitutional level.

"If it were successful, it would be an important breakthrough in terms of putting legal constraints and developing legal standards for how police investigate sexual assault," Ms. Sheehy said. 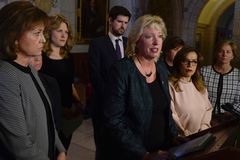