It's a long way from the dusty grasslands of Six Mile Creek on the Okanagan Indian Reserve to having dinner with Queen Elizabeth II at Government House in Ottawa.

But the Honourable Leonard Stephen Marchand Sr. made that journey in his remarkable life, which ended June 3, at the age of 82, a few days after he was admitted to hospital in Kamloops with kidney problems.

In a recent tribute, Prime Minister Justin Trudeau said Mr. Marchand "was a trailblazer for Indigenous involvement in Canadian politics and a champion of their rights. His legacy will live on in those he inspired and helped."

In a death announcement, his family described him as "a humble man who came from humble beginnings" who as a politician "demonstrated that his people could and should play an active role in the political life of this country."

Among his honours were the Order of Canada, the Order of British Columbia and the Queen Elizabeth II Golden Jubilee and Diamond Jubilee awards.

Mr. Marchand – a former Liberal MP who in 1968 became the first status Indian elected to Parliament in Canada – was born in Vernon Jubilee Hospital on Nov. 16, 1933. He grew up in a small house without running water or electricity, and with illiterate parents who farmed and ranched.

He was bound for a PhD program at the University of Oregon, and a career as a plant scientist, when his involvement in the North American Indian Brotherhood – where, among other things, he pursued federal voting rights for native people – led him into politics.

In 1965, he accepted a job in Ottawa as assistant to the minister of citizenship and immigration, becoming the first Indian to hold such a position.

In 1967, he met Queen Elizabeth II and Prince Philip after he was invited by Governor-General Roland Michener to a banquet to honour 50 outstanding young Canadians. Among the other invitees were Olympic skiing champion Nancy Greene and Golden Globe Award-winning actress Geneviève Bujold.

But Mr. Marchand, who as a young boy was in the saddle rounding up cattle with his dad, was a down to earth man who wasn't dazzled by pomp and circumstance.

"We all trooped in for dinner – which was superb – in a grand and glittering room, and the Queen gave a brief speech and wished us well, and that was all there was to it," Mr. Marchand observed in his autobiography, Breaking Trail, published in 2000, which he wrote with Matt Hughes.

In 1968, he was recruited by Liberal organizers in Kamloops to challenge the incumbent and highly popular Conservative MP Davie Fulton, "the biggest Tory west of the Rockies," who was considered unbeatable.

"Fulton controlled the riding: he had the papers behind him, as well as the business community and anybody who was anybody in Kamloops, including Indians – one of his nominators was Chief Clarence Jules Sr. of the Kamloops Band. … I didn't expect to take Kamloops away from Davie Fulton," Mr. Marchand wrote.

"We'd seen the news about the big crowds and the mounting enthusiasm down in Vancouver and Victoria, but we weren't expecting much of that in Kamloops," Mr. Marchand wrote of the day Pierre Elliott Trudeau swept in to the small town in southern B.C.

A crowd of 9,000 showed up, cheering, he said, as if the Beatles had arrived.

"They crowded so tightly around Gordon Smith's Cadillac when it was time to take the PM back to the hotel that they dented the bodywork," he wrote. "I've never seen anything like it, before or since. It was exciting. It was scary."

On election night, Mr. Trudeau phoned to congratulate him on accomplishing what many political observers had thought impossible. He had won the seat for the Liberals and would do so again in two subsequent federal elections, in 1972 and 1974, before being defeated in 1979. In 1984, he was named to the Senate where he served until retiring in 1998.

He helped amend the National Housing Act, so that it included native reserves, fought for changes that led to the Nisga'a Treaty being signed into law and throughout his career championed the rights of aboriginal veterans.

In 1990, he helped establish the Standing Senate Committee on Aboriginal Peoples which went on to report on issues such as First Nations housing and the federal government's constitutional, treaty and legal responsibilities to First Nations.

Throughout his political career he was driven by a desire to represent his people with honour.

"Any time I failed, it wouldn't just be me – it would be all of us failing, all of my kind. I could hear the voices in my head: Well, what do you expect? Just another Indian who can't cut it. I was breaking trail, being the first to do what I was doing, and I knew that – though it wasn't fair – we would all be judged by my performance," he wrote.

He was proud to be a member of the Skilwh, or Okanagan band, and bridled at the labels put on indigenous people.

"I hate being called an Indian," he wrote, although he routinely referred to himself in that way, saying he preferred that to being called aboriginal, native or First Nations.

"If it were up to me, I'd be called a 'Dene,' like many of the people of the Northwest Territories, northern Saskatchewan and northern British Columbia. It's a dignified sounding name; it's easy to say; a lot of Canadians already recognize it; and it just means 'people.' … Maybe, a generation or two from now, we Indians will have found a name for ourselves that we can feel good about. But, for now and for clarity's sake … I will continue to refer to myself and my people by the old, wrong word – although in my heart I am, and always will be, Skilwh," he wrote in his autobiography.

He also wrote this in his autobiography:

"As I look back, I can see where I have broken the trail these many years, the best I could do in my time. But now I also see that there are thousands, tens of thousands, of young Indians – like my children Lori and Len Jr. – who have come up behind me, and they are smart and confident and fearless, and so wonderfully ready and able to carry on. So now I can sit down beside the trail to rest and to watch the future move on past me." 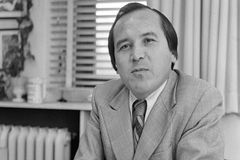