"At this point, everything I say sounds like hot potatoes." English is not Ivan Cavallari's first language, but his scrambled simile, offered during an interview this week, seems an apt description of the troubles the Grands Ballets Canadiens artistic director has brought upon himself.

Mr. Cavallari is getting all the wrong kind of attention for a mixed program planned for next season called Femmes, "on the inexhaustible theme of what it is to be a woman" – as interpreted by three male choreographers. It would be hard to find a more blatant display of gender bias in the ballet world.

Almost everything Mr. Cavallari has done to calm a storm of outrage on social media has made things worse. He changed the program title to Parlami d'Amore, but continued to describe it as a male-only meditation on "woman as the source of life." After choreographer Medhi Walerski dropped out, declaring his solidarity with women who have been shut out of creative roles in ballet, Mr. Cavallari insisted that Mr. Walerski would be replaced by another man.

The Montreal company was also blasted for the season title: An Ode to Woman. Mr. Cavallari changed that, too, to Discovering Woman, which is even worse. It sounds like the coinage of a clueless male explorer, scanning the horizon for a mysterious continent that happens to be home to half the world's population.

Mr. Cavallari's weird gender absolutes – "Woman," not women; "Her," not them – might have popped out of a time capsule marked 1958, or even 1898. The pivot from Femmes to Parlami d'Amore is just as bad. Connect the dots from Woman to love object to "source of life," and you get a straight line pointing toward a paternalistic view of women that's grossly out of step with the times.

Women as performers are often the biggest stars in a ballet company, and get the flashiest roles. When George Balanchine wanted to put the men of the New York City Ballet in their place, he told them: "You just carry the girl."

Men, however, get almost all the work in ballet choreography. The National Ballet of Canada was founded by women and is currently directed by Karen Kain, a former principal dancer, but has no pieces by women on its 2018-19 calendar. The high pedestal of the prima ballerina, it seems, is locked inside a gilded cage. In no other art form are women so central, and yet so marginal.

The works Mr. Cavallari chose for Discovering Woman include Swan Lake and Giselle. Both are core classical works that no ballet company would give up, but neither comes close to passing the ballet equivalent of the Bechdel Test. That's the one that rates films according to whether at least two women engage at any point on a topic unrelated to men.

In each of those ballets, the main female character's primary objective is to hold the love of a fickle man, or to save him through a show of undeserved adoration. The heroines both are, or become, magical creatures, and their sisters in the corps de ballet are either in thrall to a male sorcerer, or devoted to avenging themselves on unfaithful men.

You can't remove those attitudes from the works, which remain priceless artifacts of 19th-century ballet. Mr. Cavallari said he chose Giselle on historical grounds, as a marker of its time in ballet and cultural history. Okay; but it could serve other themes more constructively.

Giselle's vengeful ghosts and big graveyard scene would fit very well into a season dedicated to, say, the gothic in ballet. To program it under the rubric Discovering Woman is silly and insulting.

Swan Lake, Mr. Cavallari said, is "connected, but not 100 per cent" with the season's theme. Woman, it seems, doesn't normally spend half Her time swimming around in feathers.

Mr. Cavallari said the ruckus over his programming confirms his belief that "it's becoming more and more difficult to open a dialogue between men and women." Maybe it's just becoming harder to get a pass on views such as his. His self-inflicted public-relations disaster will get a second wind if he picks another man for Femmes/Parlami d'Amore.

The irony is that without that show, and the dumb season theme, Mr. Cavallari might look like a progressive in ballet's gender struggles. His company's next three productions all feature works by women, two of them full-length. Someone could have pointed that out in a nice news release for International Women's Day.

Instead, the director took a pick and shovel to his own good work, and is still digging. 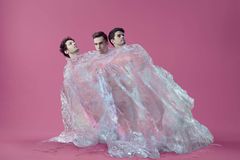