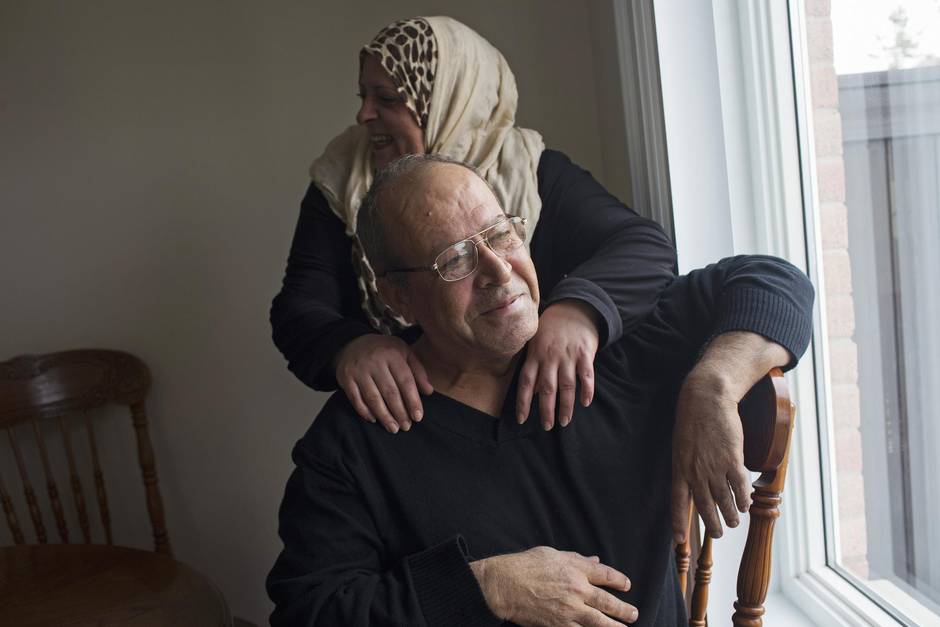 Riad Al-Balkhi, 55, poses for a photo with his wife Nadia Alswedan, 44, at their Mississauga home, which they have settled into with their five children. The family arrived in December. (Michelle Siu/The Globe and Mail)

The image of a three-year-old Syrian boy, Alan Kurdi, face down, dead on a Turkish beach, shocked the world last September. It hit especially close to home for Canadians, as the boy’s aunt, Tima Kurdi, who lives in Port Coquitlam, B.C., pleaded with Canada to open its doors to the desperate refugees.

The heartbreaking story came at a time when Canadians were preparing to elect a new federal government, bringing out the rarely seen emotional side of the party leaders and shifting the campaign’s focus as parties came under pressure to present a plan for Syrian refugee resettlement.

The Liberals’ pledge was clear – they had committed in their platform to accept 25,000 Syrian refugees through government sponsorship by the end of 2015 – but after winning a majority government in late October, they found it was one they could not keep. Though Prime Minister Justin Trudeau made Syrian refugee resettlement an early priority after the Liberals took power in early November, not even a month into their mandate, newly appointed Immigration, Refugees and Citizenship Minister John McCallum pushed back the original deadline by two months to the end of February, 2016. He also announced that the government would include privately sponsored refugees in the total goal of 25,000, as opposed to just government-sponsored refugees.

Mr. McCallum said he expected pressure on immigration officials to ease once the deadline passed.

“I think they’ll breathe a sigh of relief because after we hit our 25,000 it’ll be not exactly back to normal, but more normal, so that the pace at which the refugees will arrive will be much diminished from what has been the case in the last couple of months,” he said last week.

The effort began with security screenings in Jordan, Lebanon and Turkey last November, and despite concerns along the way – a U.S. Senate committee even examined the process – no Syrian refugees were turned away for security reasons after arriving in Canada, according to Mr. McCallum.

The first government-sponsored flight landed on Dec. 10 in Toronto, where the arrivals were greeted by Mr. Trudeau, and almost 100 flights have touched down since then.

The minister has previously said the government hopes to resettle a total of 35,000 to 50,000 Syrians by the end of 2016, of which 25,000 will be government-sponsored. The remaining spots will be filled by privately sponsored refugees or those arriving through the blended system. The exact targets will be determined in the government’s annual immigration report, expected before March 9.

The government is also on track to stay under its budget of $678-million over six years for the Syrian refugee resettlement plan, according to Mr. McCallum.

Amidst all the political chatter of budgets, targets and deadlines, Nicolas Moyer, executive director of the Humanitarian Coalition, an umbrella group for five major humanitarian groups in Canada, said it’s the intention that’s important.

“I would never put a deadline on generosity,” said Mr. Moyer. “These are efforts that very worthwhile. We’re helping people.” 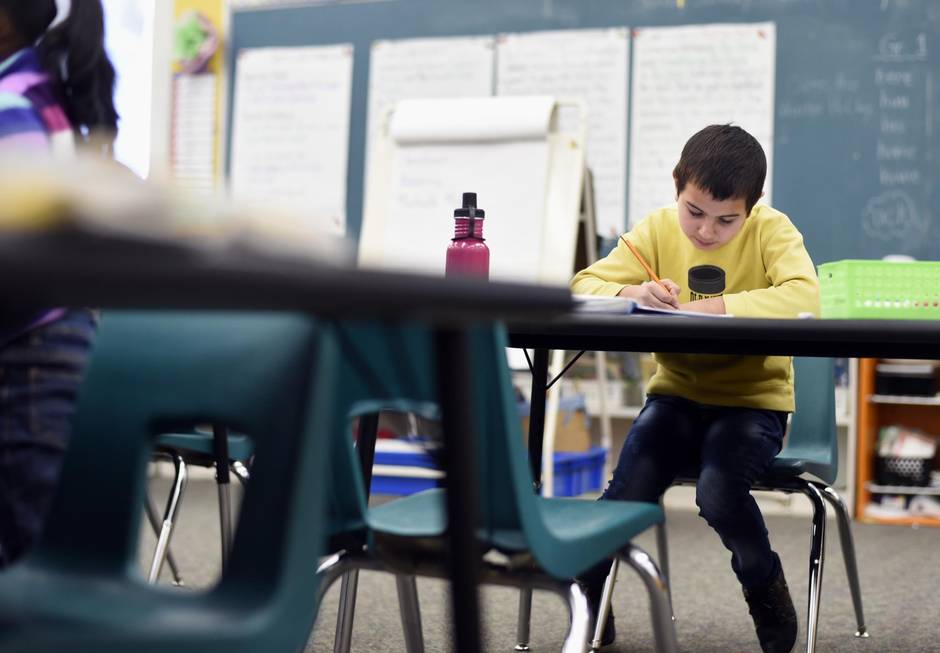 Al Rassoul, 7, spends his first day in school on Jan. 4. His family fled Holms, Syria five years ago and had been living in a refugee camp in Lebanon. (Fred Lum/The Globe and Mail)

Overseas operations for refugee evacuation launched last year are now winding down, as processing centres for security, health and identification checks in Turkey have closed, with Lebanon and Jordan expected to follow suit soon. At its peak, the crisis kept 400 staff working full-time in Canada, and 600 across the three countries overseas. Meanwhile, the government has spent more than $32-million on transporting refugees to Canada on charter flights, an average of about $1,500 a person (before they travel to their destination communities). Ottawa usually requires refugees to pay the cost of their travel to Canada – a transportation loan that can go up to $10,000 – but it has waived that for the Syrian refugees initiative.

Affordable housing for refugees has been one of the biggest challenges facing the provincial and federal governments. Immigration, Refugees and Citizenship Minister John McCallum said last week 48 per cent of refugees have not yet found permanent housing, and tenders have been issued for 650 more hotel rooms in Ontario and New Brunswick to accommodate those still in transition. Military bases remain on standby to house refugees, but Mr. McCallum has said he is “almost certain” they will not be used. Government-sponsored families get an initial one-time allowance of $900, plus about $620 of social assistance a month for rent, regardless of how many members they have. Many of these families have between seven to 12 members. Each adult gets about $240 a month for food and goods, while children get a $300 monthly tax benefit that can take months to come through. Many families end up using part of these additional funds to pay for rent.

A government report from early January found that, overall, the proportion of serious medical conditions among the Syrian refugee population is very low. But about 4.3 per cent of the refugees suffer from hypertension; 2.2 per cent have diabetes; and 1.5 per cent are visually or hearing impaired. Refugees are covered for up to a year under the Interim Federal Health Program (IFHP), which accounts for basic health-care needs until they are eligible for provincial health insurance – identical to services provided for welfare recipients. On Feb. 18, the government announced a landmark decision to fully restore refugee health-care benefits to what they were before changes in 2012, with additional benefits rolling out over the next year. In addition, many clinics across the country are offering pro-bono services that may not be covered for certain people under IFHP, such as emergency dental care or eye exams, with Arabic interpreters on hand.

Thousands of Syrian refugee children are being integrated into Canada’s schools, with challenges that range from learning English or French, to overcoming the trauma of war. In Toronto alone, about 327 Syrian newcomer children have registered at public and Catholic schools, with many more expected. The Ontario elementary teachers’ union has conducted six acculturation workshops in schools across the province, with at least eight more to come, educating instructors on how best to help children from refugee situations. Although officials say the intake has been seamless thus far, cuts to educational programs mean there may be a shortage of English-language learner programs.

Meanwhile, adults must undergo their own language instruction prior to integrating into the work force. The federally funded Language Instruction for Newcomers to Canada (LINC) program offers English instruction to refugees, but classes in many parts of the country are already at capacity, and waiting lists for basic literacy classes can extend up to a year. Instructors fear the worst of the influx is yet to come, as more people settle in their permanent housing.

53: percentage of approved government-assisted refugees cases that had five to eight people on the application

7: percentage of approved privately sponsored refugees cases that had five to eight people on the application

14: percentage of approved government-assisted refugees cases that had one person on the application

52: percentage of approved privately sponsored refugees cases cases that had one person on the application

55: percentage of approved government-assisted refugees who are under 15

27: percentage of approved privately sponsored refugees who are under 15

40: percentage of government-assisted refugees under 14 who have no education

68: percentage of adult government-assisted refugees who have high school or less

67: percentage of approved government-assisted refugees who self-report no English or French language skills 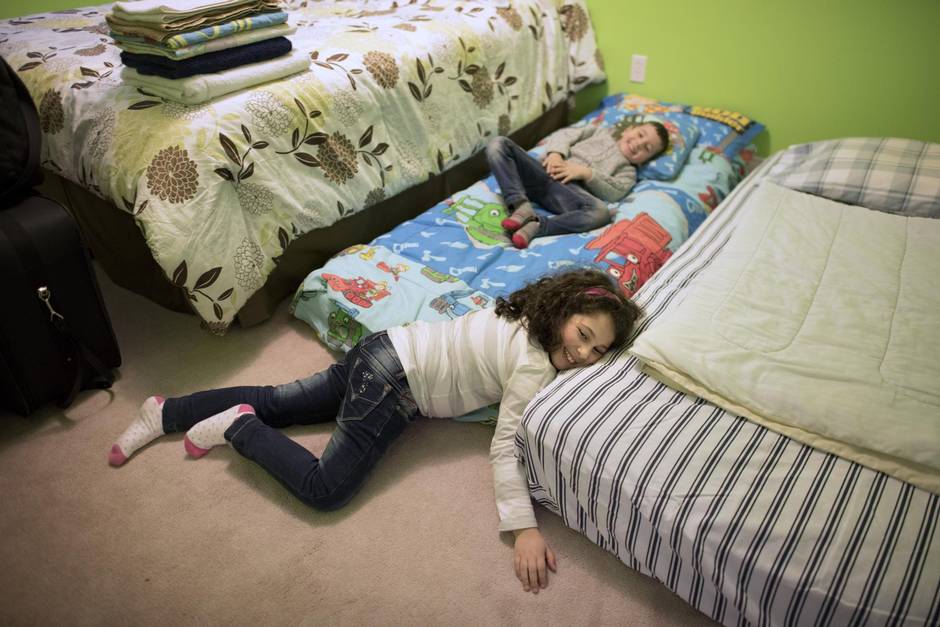 Esther Agigian, in the foreground, 7, and her brother Norair, 4, in the bedroom of their new home in Cambridge, Ont. She'll be sharing the room with their parents. (Fred Lum/The Globe and Mail)

28,194: Number of Syrian refugees who have either arrived in Canada or whose application has been finalized since Nov. 4, 2015

13,798: Number of government-assisted refugees who have arrived in Canada, as of Feb. 25

2,093: Number of blended visa office-referred refugees who have arrived in Canada, as of Feb. 25

8,201: Number of privately sponsored refugees who have arrived in Canada, as of Feb. 25

96: Number of government-organized flights that have arrived in Canada as of Feb. 28

54: Number of flights that landed in Toronto

42: Number of flights that landed in Montreal

12,412: Number of refugee resettlement applications in progress, as of Feb. 25

Of those: 3,057 applications in Jordan