The trial in one of Canada's most publicized and shocking criminal cases is set to begin Monday with evidence being heard in the proceedings against alleged murderer Luka Rocco Magnotta.

Magnotta, 32, has pleaded not guilty to five charges in connection with the slaying and dismemberment of Chinese engineering student Lin Jun in May 2012.

The charges are first-degree murder; committing an indignity to a body; publishing obscene material; criminally harassing Prime Minister Stephen Harper and other members of Parliament; and mailing obscene and indecent material.

Trial judge Guy Cournoyer questioned potential jurors earlier this month about whether they could stomach evidence that could be considered gruesome, graphic and possibly upsetting.

The 14 bilingual jurors who will hear the case will receive instructions from Cournoyer before prosecutor Louis Bouthillier begins presenting the Crown's arguments.

The investigation was launched after the discovery of a human torso stuffed in trash behind a Montreal apartment building in May 2012. Body parts then began surfacing in different parts of Canada — first at a federal political office in Ottawa and, later, at two British Columbia schools.

A video that purportedly depicted a slaying was posted online around the same time and was linked by Montreal police to the discovery of the body parts.

As the investigation progressed, Magnotta was discovered to have left the country, triggering an international police manhunt that Montreal police said was the largest in which they had taken part.

Interpol became involved and Magnotta was arrested without incident at a Berlin Internet cafe on June 4, several days after Lin's slaying.

He returned to Canada a few weeks later, escorted by several Montreal police major-crimes detectives aboard a Canadian government plane.

Bouthillier has said up to 60 Crown witnesses could be heard at the trial, which is expected to last between six and eight weeks. Some Europeans could be called to testify.

The process of selecting the jury took eight days, with the court vetting about 1,600 people called to serve. That group was narrowed down to 16 people. Two will be dismissed when the trial begins and two of the remaining 14 will be discharged before deliberations.

The trial will take place primarily in English, although some parts are expected to be in French.

Magnotta will be represented by Toronto-based attorney Luc Leclair. The lawyer told reporters he was seeking jurors who were open-minded and intelligent and willing to listen to the case.

"There was a time that we never thought this day would come."

Magnotta is a native of Scarborough, Ont., who, according to police, set up dozens of Internet user names and maintained 70 Facebook pages and 20 websites.

The trial is likely to lure plenty of curious onlookers. During the preliminary hearing, the case attracted criminology students, legal junkies and even a handful of people who appeared to support Magnotta.

Proceedings will be heard in a special courtroom equipped with numerous screens and a large metal-and-glass enclosure behind which Magnotta will sit.

But seating is limited: five spots will be set aside for media and five others for the public. A few other seats are reserved for Lin's family, including his father Diran, who is in Canada for the trial.

The trial will otherwise be broadcast to an overflow room on a different floor.

Diran Lin has attended several days of proceedings since the case began and has said he hopes to see justice for his son.

Jun Lin, 33, was born in Wuhan, the capital of Hubei province. He had only been living in Canada since 2011, realizing a long-standing dream by coming to Montreal.

His family said in April 2013 that Lin had a comfortable life working in IT at Microsoft's Beijing office, but had sought a move to Canada to study and to improve his life.

At the time of his death, Lin was enrolled as a computer engineering student at Concordia University and worked as a part-time convenience store clerk in south-central Montreal.

The 16 people selected as jurors and alternate jurors are:

3: Man, works for a cleaning company

14: Woman, works in administration at a butcher's shop

Jurors 15 and 16 are alternates who will only sit if any of the first 14 jurors are unable to do so. Otherwise, they'll be discharged on Monday before the trial begins. 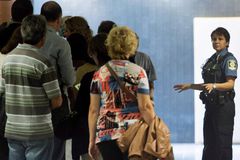 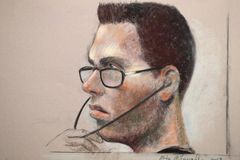