Handcuffed and flanked by guards, a blank look on his boyish face, Luka Magnotta made his first appearance inside a Montreal courtroom to request a trial by jury in the ghoulish body-parts slaying of university student Lin Jun.

Mr. Magnotta's three-member legal team did not request a psychiatric assessment for the high-profile client, as had been anticipated.

Instead, lead counsel Luc Leclair asked the court on Thursday to ensure the 29-year-old would get his medication while in detention.

Mr. Leclair, a lawyer from Toronto, said he was worried about Mr. Magnotta's mental and physical well-being.

The judge granted the request but imposed a publication ban that prevents the media from reporting the type of medication involved.

Mr. Magnotta's surprise public appearance is expected to be his last for months, coming on the heels of weeks of intense global scrutiny about his alleged crime and then his whereabouts. The Crown and defence set aside two weeks for a preliminary hearing in mid-March.

The suburban Toronto native, wearing a plaid shirt and dark pants, sat behind a glass enclosure, looking straight ahead and rising briskly when addressing a few words to his lawyer.

He arrived at the Old Montreal courthouse by correctional van from the Rivière-des-Prairies Detention Centre in east-end Montreal, where he is being kept in isolation and under strict protection, allowed out of his cell only one hour a day.

A court-ordered psychiatric evaluation would have determined Mr. Magnotta's criminal responsibility in his alleged crime, but nothing stops his legal defence team from seeking their own psychiatric assessment that could be presented in court if they choose.

Mr. Magnotta pleaded not guilty Tuesday to first-degree murder and four other charges connected to the killing and dismemberment of Mr. Lin, a Chinese national studying computer science in Montreal. The onetime escort is suspected of mailing the student's body parts to the Conservative and Liberal parties in Ottawa and to two Vancouver schools, and posting a video of the alleged crime on the Internet.

In brief comments to the media, Mr. Leclair noted that Mr. Magnotta waived his right to extradition to return voluntarily to Canada from Germany after his capture.

"He wanted to come back to Montreal. He trusts the Canadian judicial system," said Mr. Leclair, who is being assisted by Montreal lawyers Jean Dury and Pierre Panaccio.

It was Mr. Leclair's choice to bring Mr. Magnotta into court, an unexpected turn since it had been decided on Tuesday that he would appear by video link.

The suspect's appearance also brought him into the same building as the family of his alleged victim. The Lin family, including Mr. Lin's parents, arrived from China this month and were present Thursday in the courthouse. They met with the case's two Crown prosecutors, Louis Bouthillier and Hélène Di Salvo, who have vowed to keep the Lin family informed about the trial even after they return to China.

Mr. Leclair, who obtained special permission from the Quebec Bar to represent Mr. Magnotta, is a Toronto criminal lawyer who has worked on leadership campaigns for several prominent Conservatives, and as a regional organizer for Northern Ontario.

He worked with Defence Minister Peter MacKay in his bid for the Progressive Conservative leadership in 2003, among others. 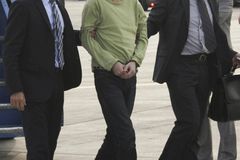 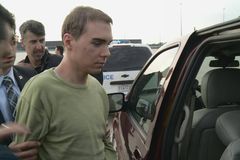