A dog that attacked a Hamilton man who later died may still be euthanized, despite autopsy findings that the dog did not cause the man's death.

Hamilton police said the dog was walking with two men before attacking one of them at around 11:15 p.m. Wednesday on Burton Street, near Hamilton's north end. A passerby who saw what was happening used a baseball bat to attack the dog, at first described as a pit bull but later identified as a Shar-Pei-Fila mix.

Witnesses described the man, believed to be in his 30s, screaming as the dog attacked, then falling silent after the animal was finally pulled off. But the forensic pathologist's report ruled out a dog attack as the ultimate cause of death, and the man's death is now subject to a coroner's investigation.

Police spokeswoman Catherine Martin told The Canadian Press there was no doubt the animal had attacked.

Dr. Jack Stanborough is handling the case as the regional supervising coroner for western Ontario. He said more tests, including toxicology, have been ordered, and there are no "obvious traumatic injuries" that point to the cause of death.

"Certainly, a dog biting my neck out would be quite obvious," he said. He added that there was "no credible evidence" that the victim may have been accidentally injured by the man who tried to help by hitting the dog with a baseball bat.

Although the dog attack is not the focus of the investigation, Dr. Stanborough said the animal was still involved in the scenario that led to the man's death. "There's no doubt there was a dog involved with somebody who died, but what that role was – whether it was totally immaterial or irrelevant, or an incidental finding, or whether there was a contributory role – this has to be sorted out."

Ann Lamanes, a communications officer with the City of Hamilton, said reports from Hamilton police and the coroner will determine the dog's fate. The animal was seized Thursday morning by Hamilton Animal Control, where it remains under video surveillance.

"Even if the dog did not cause the death, if it's found there is some substantial injury to the victim, there is some possibility the dog could still be euthanized," Ms. Lamanes said.

It took about five hours to seize the dog, and officers had to use pepper spray to catch it.

Ms. Lamanes described the dog as being around 40 or 45 pounds, a medium size for the breed.

Because the dog had no identification, it's unclear whether the victim was the dog's owner.

Earl Secord, 43, lives on Burton Street just outside the area police blocked off. He said he had previously seen the man walking the dog around the neighbourhood.

Sitting on his front step, Mr. Secord described the scene he found when he ran outside to the sound of screaming. "I've never heard someone scream like that before," he said.

The dog had the victim on the ground, he said, while two other men were frantically trying to stop the attack.

"[The dog] was on him ripping and tearing. … He grabbed him right up here," he said, motioning to his chest, "and he wouldn't let go."

Mr. Secord saw the man trying to keep the dog at bay by hitting it with a baseball bat, but the dog just "shook it off." Mr. Secord went inside to call the police and get his own bat to help, but when he came out again, the others had managed to pull the dog away.

As the men stood between the dog and the victim, Mr. Secord said he knew something was wrong.

"He wasn't moving. He wasn't screaming any more," he said.

"It's a heavy thing to see. … I never knew that a dog could do that and just keep going.

"Once he started to attack, that was it. He wasn't stopping."

The dog appeared to target only the one man, Mr. Secord said, and it stood its ground even after police arrived.

The final coroner's report will not be available for several months. 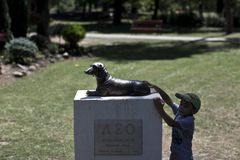 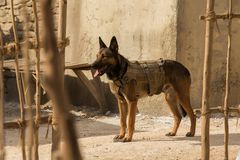