A man who says he was sexually assaulted as a child by the man at the heart of the Maple Leaf Gardens sex abuse scandal testified Wednesday that he repressed memories of the trauma for decades.

The man, whose identity is under a publication ban, told a Toronto court that seeing Gordon Stuckless a few years ago triggered his memory and pushed him to attempt suicide shortly afterward.

Now, taking the stand at Stuckless's latest trial related to the alleged sexual abuse of young boys, he described first meeting the former Maple Leaf Gardens employee while trying to sneak into the famed Toronto arena with friends in the late 1970s.

Stuckless befriended the boy, who was 12 or 13 at the time, taking him and the others inside the arena, sometimes close enough to get players' autographs, the man testified.

"He said it was a natural thing to do, that everyone did it," he said. The man said he didn't talk about what happened with anyone, not even the other boys, who have since passed away.

He has pleaded not guilty at the judge-alone trial, though his lawyer said the charges for buggery — a charge that no longer exists and refers to sodomy — are the sticking point.

The trial that began Wednesday is the latest legal proceeding for Stuckless.

He was also convicted of two additional charges of gross indecency linked to two of the victims but cleared on two counts of buggery. The trial judge said that while Stuckless had "probably" committed buggery, that was not enough to convict him on those charges.

He was sentenced last year to 6.5 years in prison, but was given credit of six months for time served under house arrest. Prosecutors are appealing the sentence.

The former assistant teacher and volunteer coach had also previously pleaded guilty in 1997 for sex assaults on 24 boys while he worked as an equipment manager at the Maple Leaf Gardens between 1969 and 1988.

He was sentenced to two years less a day in that case, but that was later increased to six years, less a year for pre-trial custody. He was paroled in 2001 after serving two-thirds of his sentence.

He was convicted on three other occasions of sex offences against a total of nine underage boys, according to court records. Victims furious at six-year sentence for Gordon Stuckless on sex-abuse charges
May 16, 2018 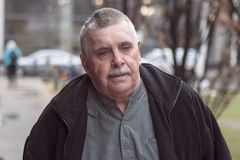