It took less than a minute.

A helicopter descended out of the evening sky into the middle of a prison yard. Three inmates jumped aboard and before anyone could stop it, the helicopter was airborne again, last seen taking the escapees somewhere to the west of the Quebec provincial prison in Orsainville Saturday.

It was the second time in a little more than a year that inmates have escaped from a Quebec prison aboard a helicopter.

The three fugitives were still at large Sunday evening. They are all suspected murderers believed to have ties to the Hells Angels motorcycle gang. They were being housed in the medium-security prison during their trials on the charges.

"It certainly seems like it was well-planned, " said Ann Mathieu, a spokeswoman for the Sûreté du Québec provincial police. She identified the prisoners who escaped as Yves Denis, 35; Denis Lefebvre, 53 and Serge Pomerleau, 49.

The three men are all facing a bevy of charges, including murder, drug-trafficking and gangsterism. They are considered "extremely dangerous."

Ms. Mathieu would not reveal any details of the continuing investigation other than to say: "Our No. 1 priority is finding the aircraft and the escapees as quickly as possible."

With a massive manhunt under way Sunday night, police refused to say where they were concentrating their efforts for fear of compromising the investigation.

In March, 2013, a pair of convicts fled the provincial jail in Saint-Jérôme, Que., by climbing a rope that was dropped in the courtyard from a chopper hovering above.

In that case, a helicopter was hijacked at gunpoint and the escapees and their accomplice were arrested within hours.

It is not clear to whom the helicopter used in Saturday's escape belonged, and police wouldn't say if there were any reports of stolen aircraft.

But it is notable that one of the escapees, Mr. Lefebvre, is himself a former helicopter pilot.

Mathieu Lavoie, president of the Syndicat des agents de la paix en services correctionnels, the union representing Quebec prison guards, criticized the Ministry of Public Security for not learning from the previous incident, in particular failing to heed calls to install metal cables over prison yards to make helicopter landings impossible – as is the norm in the United States and much of Europe.

He also dismissed criticisms that guards at the jail failed to act promptly when the helicopter was spotted.

"The rules of engagement do not allow us to fire on a vehicle, let alone a helicopter," Mr. Lavoie said.

He noted that guards who patrol the outside courtyard where the convicts were when they escaped, as well as those who are in the prison's observation tower, are not armed. Officers who patrol outside the fences do carry weapons, but the union boss said they do not have the authority to fire on an aircraft, even if it's fleeing the prison.

The Orsainville Detention Centre is a medium-security jail located on the outskirts of Quebec City.

The facility houses more than 700 prisoners; most of them are serving sentences of less than two years but some, like the escapees, are kept there during their trials, even if they face more serious charges and would normally be held in a maximum-security federal prison.

The three prisoners who escaped were arrested in 2010 as part of a huge drug operation dubbed Opération Écrevisse (Project Crawfish). At the time, police said they were key players in a large drug-trafficking ring in the Abitibi region of Quebec and had close ties with the Hells Angels.

The three are currently on trial for drug trafficking. They are also slated to stand trial in January for three murders; they are accused of killing drug dealers from a rival gang.

During the Project Crawfish busts, police arrested 51 people, and seized several kilos of cocaine, a large cache of weapons, 41 vehicles, a plane, a helicopter and almost $1-million in cash, according to Radio-Canada.

The daring method was immortalized in the 1975 film Breakout, starring Charles Bronson, which was, in turn, inspired by the real-life chopper escape from Mexican prison by U.S. millionaire Joel David Kaplan in 1971. 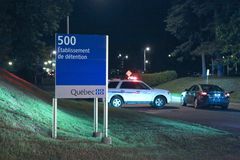 Quebec on alert after second jailbreak with helicopter
June 7, 2014
Strange twist in Quebec helicopter jailbreak
March 21, 2013
Quebec jailbreak a tense collision of fear and flying
March 18, 2013
Follow André Picard on Twitter @picardonhealth
Report an error Editorial code of conduct
Due to technical reasons, we have temporarily removed commenting from our articles. We hope to have this fixed soon. Thank you for your patience. If you are looking to give feedback on our new site, please send it along to feedback@globeandmail.com. If you want to write a letter to the editor, please forward to letters@globeandmail.com.
Comments