Manitoba Premier Greg Selinger is apologizing to aboriginal communities for the damage hydro-electric development has done to their traditional land, way of life and cultural identity.

In a speech to the Cross Lake First Nation on Tuesday, Selinger said hydro development has changed water levels affecting everything from transportation and water quality to hunting and trapping.

"The effects are more than just those on land and water and on plants and animals," Selinger told about 200 gathered for what the community called a day of reconciliation. "We recognize that hydro development can affect the cultural identities of aboriginal peoples because of the close relationship of aboriginal peoples to the land and resources.

"Looking back on what has happened and on the effects on aboriginal communities in Manitoba, I wish now on behalf of the government of Manitoba to express my sincere apology to aboriginal people affected by hydro development."

Agreements have been reached with many First Nations to address the effects, Selinger said. The province and Manitoba Hydro are committed to continuing to work respectfully with aboriginal people, he added.

Selinger agreed to visit Cross Lake following a six-week occupation of the Jenpeg generating station last fall. Protesters had said they wouldn't leave the grounds of the dam until they received a personal apology from the premier.

The occupation ended in November with an agreement to negotiate the First Nation's concerns over revenue-sharing, environmental cleanup and help with residential electricity bills that hover around $600 a month in the winter.

Chief Catherine Merrick told the gathering that hydro development in the area has forced people to move and disturbed graves along the lakeshore. People have also "died as a result of dangerous ice and floating debris caused by Jenpeg," she said.

"The hydro project has also contributed to mass unemployment and mass poverty for our people. It has piled on top of the other difficulties we have faced," she said.

"It is not possible to capture in words the damage done. Much of the harm is irreparable. It has forever changed our ways of life and our health.

Merrick said nothing can truly replace what has been lost.

"That is a bitter reality we must live with. All we can do is stand here today to let out the grief and to heal our nation. Mr. Premier, you have contributed to that healing today."

Hundreds of protesters from the First Nation north of Lake Winnipeg marched to the hydro dam on Oct. 16. The generating station continued to operate during the occupation, but protesters wouldn't let anyone in or out.

The band signed an agreement in 1977 after the Jenpeg dam was built, but Merrick said their traditional lands are regularly transformed into a floodway and none of the promised economic development and employment programs materialized.

During the occupation, Selinger was sympathetic and said protesters have some long-standing concerns that need to be addressed. But his apology is only the beginning of reconciliation, Merrick said.

"The apology does not fix the past. It does not even fix the present," she said. "Our lands, waters and resources are still a mess. Our people still lack a fair share of the opportunity generated by the river. Our people still have to face debilitating hydro bills."

Jenpeg is about 525 kilometres north of Winnipeg and is key in Manitoba Hydro's northern electricity generation. The dam helps regulate the level of Lake Winnipeg, which has become swollen in recent years due to flooding. It also acts as a reservoir for other northern generating stations.

By Chinta Puxley in Winnipeg. 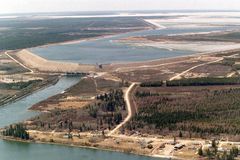 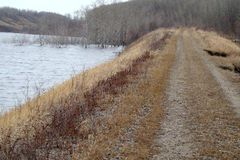 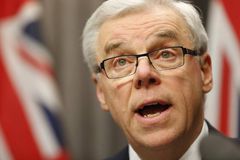