For the second time in several months, a restaurant owner in the small Manitoba community of Morris says she is being driven out of town by discrimination.

Thea Morris, the Jamaican-born owner of Thea's Diner, said Wednesday she has received an e-mail referencing the Ku Klux Klan and has been told by one of her customers that people are avoiding her business because she is black.

And since the KKK e-mail, some customers have been behaving strangely, she said. People who appear to be in their 50s and very well-dressed come into the restaurant, in groups of two or three, and quickly leave.

"They'll come in and sit down and order their beverage to start, and by the time you'd take the beverage to them, they would get up and walk out.

"It has come across as intimidating."

Morris opened her diner in June in the same spot that used to house Pots N Hands, which was run by a gay couple.

Pots N Hands owner Dave Claringbould and his partner closed down in April. He said they were subjected to homophobic slurs, including one customer who asked whether the food was infected with disease.

Morris, who lives in Winnipeg, said she had hoped things would be different for her. Business was good in the summer, but customers mostly stopped coming at the end of August, she said. Then a series of strange events had her worried for her safety.

Someone left a dead hawk on the windshield of a worker's car, she said. When she placed an online ad for restaurant staff, she received a reply from someone who claimed to be linked to the Ku Klux Klan and who asked whether Morris residents were "still chasing colours" out of town, she said.

"That did not shake me. I still continued business."

Occasionally, customers would defecate in the men's urinal or on the floor of the washroom.

At one point, Morris said, a customer told her matter-of-factly what was going on.

"One older gentleman told me the reason people were not coming into my restaurant was because of my colour."

In recent weeks, business has all but dried up, she said.

The office of Premier Greg Selinger said Wednesday he had been in touch with Morris by phone to express regret for the way she has been treated.

He offered his personal support and said he has enjoyed her cooking back when she ran a food truck in Winnipeg.

Morris Mayor Gavin Van Der Linde said the town is taking the matter seriously and has passed along some of the concerns to the RCMP.

He cautioned people not to jump to the conclusion that the diner has been targeted by racists. It's not uncommon for some customers to leave without paying, he said.

"I don't believe anybody made any disparaging remarks [while] leaving the restaurant," he said.

"I think any restaurant would face similar things to that."

The drop in business may be due to competition, Van Der Linde suggested.

"This is the fifth restaurant that has been in that location in four years, and it just has not worked out for any of the previous owners."

Morris has given notice to her landlord that she plans to leave by the end of December.

The town is home to about 1,800 people and lies 50 kilometres south of Winnipeg on the main highway link to the United States.

When the Pots N Hands owners announced they were closing due to homophobic slurs, Van Der Linde, Manitoba Premier Greg Selinger and others had lunch at the restaurant in a show of support.

Van Der Linde said Wednesday the town is not what some make it out to be.

"It seems to be what is picked up by the media and paints a very negative light … really does not reflect who we are." 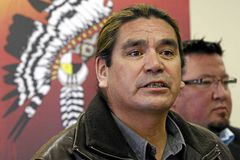 Alleged racist parents lose custody of children
February 12, 2010
Man denies urging daughter to kill blacks
June 30, 2009
Report an error
Due to technical reasons, we have temporarily removed commenting from our articles. We hope to have this fixed soon. Thank you for your patience. If you are looking to give feedback on our new site, please send it along to feedback@globeandmail.com. If you want to write a letter to the editor, please forward to letters@globeandmail.com.
Comments