And although the province will be getting more money from federal equalization payments and a new provincial carbon tax slated to take effect this year, Pallister says his efforts on fiscal restraint – including cuts to some services – are not over.

"I think that maintaining fiscal discipline, balancing a budget ... is a job that's never done," Pallister told The Canadian Press.

"We have an obligation to maintain a responsible and strong government that makes Manitobans confident that their finances are going to be more stable ... that their services are going to be safer, more secure. And that's not a today challenge, and it's over, and suddenly there's good news coming out."

Pallister said the March 12 budget will raise the exemption faster than inflation as a step toward putting Manitoba's exemption close to the national average. That was a promise in the 2016 election.

The budget will also put up more health-care money so that ambulance fees can be further reduced, Pallister said. The Tories campaigned on a promise to halve the fees, which ranged up to $500, and have made some progress on that file.

"We want Manitobans to get the care they need, especially when it's an emergency," Pallister said.

The premier has some financial wiggle room as he tries to keep his promises and reduce Manitoba's $779-million deficit. Equalization payments from Ottawa are set to jump $217-million this year. The carbon tax slated for later this year is expected to raise another $260-million annually.

The province will also get a slice of tax revenue on marijuana once recreational cannabis is legalized.

The Opposition New Democrats say Pallister could use some of the revenue "windfall" to reverse cuts to front-line services. Recent changes include a reduction in a subsidy for sleep-apnea patients, consolidation of emergency departments in Winnipeg and a 0.5 per cent public-school funding increase that the teachers union says falls far short of maintaining the status quo.

"Pallister is more focused on budget cuts and the spreadsheets that he's looking at than on the services that families in Manitoba rely on," NDP Leader Wab Kinew said.

Kinew pointed to a Conference Board of Canada report that said Manitoba's economic growth is slowing, something he blames on the government's spending restraint.

Pallister said he has no choice but to keep a tight rein on spending because he inherited a series of deficits from the former NDP government that led to two international credit downgrades.

He also said he is determined to cut certain taxes to bring Manitoba in line with other provinces.

"Manitobans value health care but they also know that if taxes keep going up, they're going to have less money to secure the finances of their family and that's not a good thing." 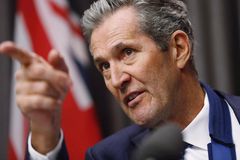 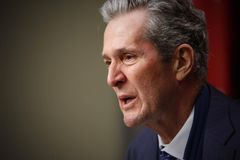 Winnipeg chamber chair calls out Manitoba premier for comments on appearance, high heels
December 8, 2017
Report an error
Due to technical reasons, we have temporarily removed commenting from our articles. We hope to have this fixed soon. Thank you for your patience. If you are looking to give feedback on our new site, please send it along to feedback@globeandmail.com. If you want to write a letter to the editor, please forward to letters@globeandmail.com.
Comments are closed